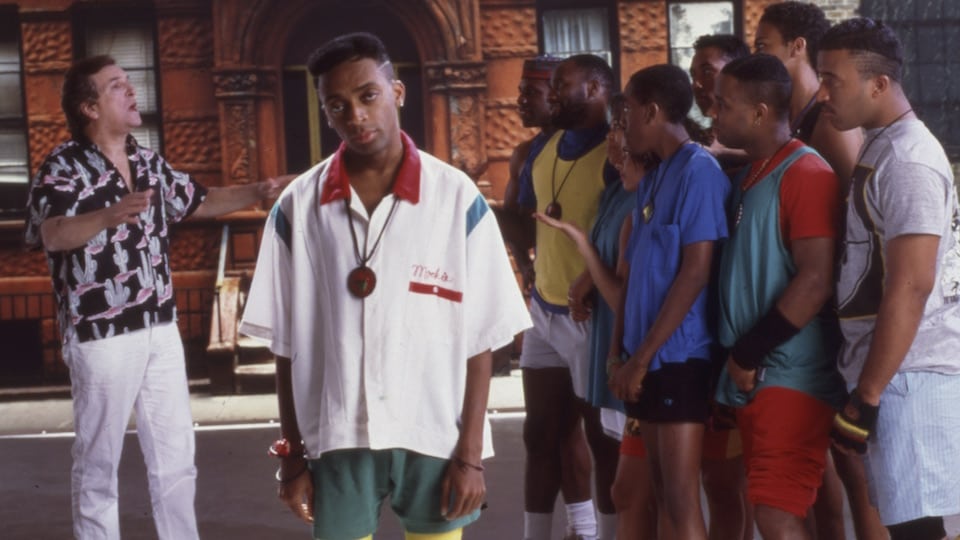 There are few films that capture the simmering tension of an urban summer quite like Spike Lee’s 1989 film Do the Right Thing, where a New York City heatwave becomes the manifestation of American racial tensions. Although its action is more or less limited to a Bed-Stuy block in Brooklyn, the scope of this insightful film is certainly panoramic. Lee manages to bring the heightened reality of theater to his “Street Scene” film and uses the movie’s soundtrack as a powerful, natural extension to the furiously funny dialogue that so forcefully draws us into the action. The film’s score is a veritable window into the hip-hop and contemporary R&B scenes that were taking over in the late 1980s, and its enduring appeal is a testament to the strength of the era’s musical innovation. With its peppering of New Jack-era hits, summer party anthems, and slow jams Do the Right Thing’s music captures both the frivolity and the fury of 1980s America.

Undoubtedly the song which has become most synonymous with Do the Right Thing, Public Enemy’s “Fight the Power” not only served as the film’s leitmotif, it also fully embodied the spirit and energy of the movie. The song accompanies the opening credits during which we see Rosie Perez’s character “Tina” dancing by herself against a backdrop of Brooklyn neighborhood images. Her dancing is fierce and pugilistic, and immediately communicates a tone of feverish intensity that will continue throughout the film. Spike Lee handpicked Public Enemy to create a theme song for his work, and Chuck D and the Bomb Squad did so with unapologetic mastery. “Fight the Power” is played fifteen times throughout the movie, and as its lead single, this singular track managed to both reflect the zeitgeist of the black community during that time, and become a lasting rallying cry for activists all over the world.

In 1989, the New Jack Swing movement was at its height. Spearheaded by Teddy Riley and Bernard Belle, this fusion of hip-hop, dance-pop, and R&B was taking over the black New York club scene. Riley was known for his inventive, funky beats, and before he created the group Blackstreet in 1991, his group Guy was commissioned to contribute a hot number for the Do the Right Thing soundtrack. “My Fantasy” was an instant hit, reaching the Number One spot on the Hot Black Singles Chart in 1989. The song also served as the backbeat to the film’s turning point, when Buggin’ Out (Giancarlo Esposito) tells Mookie (Spike Lee) about his plans to boycott Sal’s pizza place.

Related: “Spike Lee’s Timely Revival of ‘She’s Gotta Have It'”

While present-day Brooklyn may be best known for independent coffee shops and bearded hipsters, the outer-borough in the 1980s was a place for block parties and spontaneous gatherings over music. It’s only fitting then that Spike Lee called upon the legendary Go-Go band E.U. to deliver a track that had the party-hopping movers and shakers of that time in mind. Their song “Party Hearty” may be light on lyrics, but its funky rhythms and contagious instrumentation are hard to resist, making it an undeniable dance-party staple.

Although a lot has changed since 1989, one thing that hasn’t is the suffocating heat of a New York City summer. Perfectly capturing the sweltering temperatures the city endures is Steel Pulse’s feel-good, reggae tune “Can’t Stand It.” One of the things that makes Do the Right Thing such a lasting, relatable film is the way in which Spike Lee every so often pulls back from the film’s narrative in order to deliver montages that engross us fully in the time and place of the story. The scorching summer heat is thus palpably portrayed in the film through the juxtaposing images of sweating bodies and cooling water, scored by Steel Pulse’s appropriately named “Can’t Stand It.”

Spike Lee gives a little corner of doo-wop with “Don’t Shoot Me,” sung by the a cappella gospel group Take 6. While the funky beat and soulfulness of the song conjure up images of stoop-singing groups of a bygone era, the lyrics of the song transport us directly into the narrative of Lee’s film and contextualize the feeling of neighborhood angst we see played out on screen. “Don’t shoot me, I didn’t mean to step on your sneaker” references the iconic moment in the movie when Buggin’ Out has a run in with a Brooklyn gentrifier, giving the song a singular blend of old-school musicality with the very real problems we see going on in the film.

Photo Credit: Director and actor Spike Lee on the set of his film ‘Do the Right Thing,’ New York, 1989. Among the cast behind him is actor Danny Aiello (left). (Photo by Anthony Barboza/Getty Images)

0 comments on “Soundtracks that Rock: “Do the Right Thing””