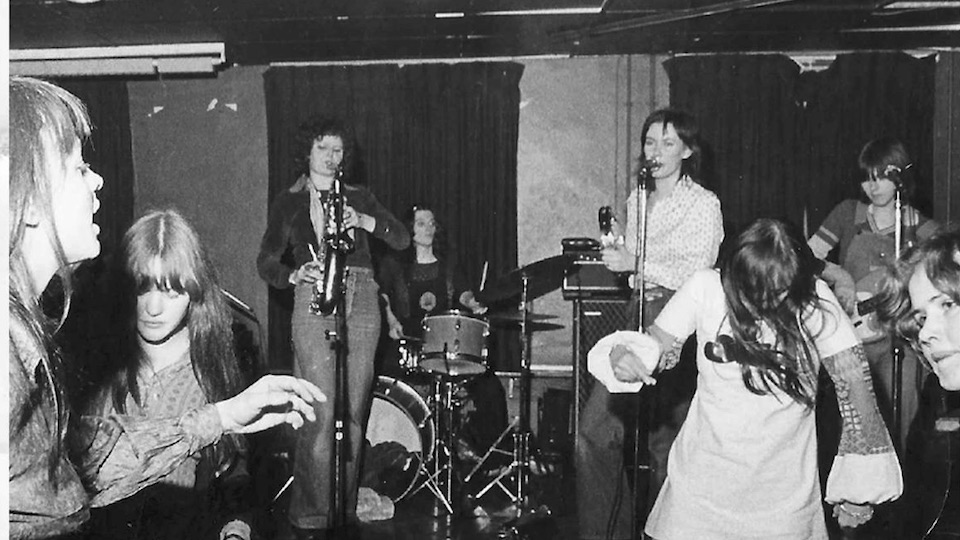 As back stories go, it’s a good one: pioneering 70s feminist rock band battles prejudice and hard times, playing sophisticated, political songs in pre-Thatcher-era UK. Nigh on 40 years later, they finally reunite to record an album. That album sits on a shelf for a decade, only to be released during one of the most turbulent years imaginable. Back in 1975-1976, The Stepney Sisters, living in a squat in London, played over 50 gigs as an all-female rock band. They became highly involved in the women’s liberation movement, performed live at the Women’s Free Art Alliance and the National Women’s Liberation Conference, ran workshops, and handed out pamphlets containing their progressively-minded lyrics.

Despite being together as a working unit for only 18 months, the bond was strong enough to see them reunite in 2010 to lay down a full set. After a tortuous journey, that record is, at last, seeing the light of day, via the UK’s independent Alcopop! Records.

Is The Stepney Sisters’ self-titled debut worth the wait? Opener “Never Get To Heaven” sets off with a surprisingly funky feel, pitched somewhere between early Motown and slick, 80s soul. It’s a well-crafted track, which rolls and bounces with jazzy guitar and uplifting lyrics, swinging horns, and plenty of fun. “Sisters” ups the funk ante further, with deep bass and vamping piano. Sounding almost like Annie Lennox / Eurythmics, albeit with a slightly grittier edge. “Find a sister, meet her, find a sister, greet her,” harmonize the band, before sax and guitar come together and swirl around for a few bars.

There’s a clear gospel vibe on this rolling number. So easily-digestible is the Sister’s music that it’s easy to miss the feminist message in their lyrics, although perhaps that is the point – that the two factors fit together organically.

“Hey Baby,” with fuzzy guitar riffs and thumping beat, eases down the road with a polished, bluesy feel. For a set recorded in 2010, this is an album firmly planted in its 70s roots. You can hear a little bit of many things reflected in this music – the aforementioned Motown, Sly Stone, Funkadelic, the more polished dance-floor sound of Earth, Wind & Fire. “Lonely Man,” in fact, is as lush and laid-back as they come.

If there’s a weakness here, it is that the band’s words don’t always match up to the sophistication of their playing: “our sexuality should not be a fear, but a way of showing friendship and moving near.” “Knock On The Door” rattles and rolls with admirable verve. The Stepney Sisters certainly know how to craft interesting compositions with enough variety and energy to keep you listening.

The slow, creeping introduction to “Family Song” soon gives way into an upbeat, quirky groove. There’s an interesting blend here of eccentric XTC-ish explorations mixed with straightforward, polished pop and diverting blues. “Love Letter” rushes by in a whizz of ticking drums and ear-candy adornments. “Dying Ain’t No Life” closes the show, with a by-now-familiar formula of smart arrangements and a smooth, cosmopolitan feel. Taken as a whole, The Stepney Sisters offers up a surprising package, a time-capsule of sorts which it is difficult to place. Within these eight tracks, you will hear echoes of everything from 40s retro kitsch to 70s pop ballads and 60s beat music.

Does it work? There’s enough craft and invention here to warrant repeated listens, and I suspect only time will tell if the somewhat disconcerting combination of contemporary production with an admittedly dated feel will prove a winner. Whichever side of the fence you come down on, The Stepney Sisters is a fascinating piece of musical history.

PR photo of The Stepney Sisters