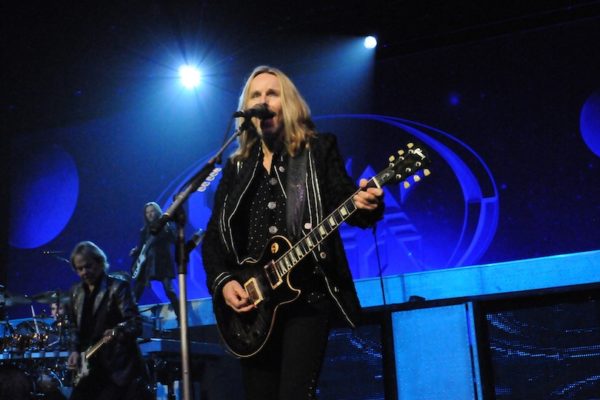 Since 2017, Styx has set up a rock n’ roll residency at The Venetian Theater in Las Vegas. That’s great news for fans, and after playing around 100 dates that same year, it’s most likely a nice break for these touring warriors of rock as well. Additionally, Styx’s latest album The Mission was released last June. Not only was it the band’s first studio [amazon template=right aligned image&asin=B06ZZ53ZRL]release in 14 years but the record was also a concept album chronicling a crew of space explorers as they travel to Mars and beyond. And yes, the fictitious crew does make a stop on Pluto’s moon, Styx, before it heads off to deep space.

More recently, Styx has been packaging tour dates with REO Speedwagon and Don Felder, the former guitarist of the Eagles. Naturally, during their Venetian gig, Styx’s Tommy Shaw jumped at the chance to include Felder in his “Renegades in the Fast Lane 2” shows. As he told one particularly enthusiastic crowd this past January, “Every once in a while, we get to do something really cool.” By that, he meant the band gets to play a few Eagles covers while Felder rips it up on lead guitar. Cool as that may be, it’s Styx’s song power, showmanship, and spot-on delivery that keeps them classic rock touring royalty.

Although he wasn’t part of the original lineup, Shaw’s joining of Styx in 1975 helped launch the band to massive chart success and a five-album run of platinum plus records starting with The Grand Illusion (1977) and ending with Kilroy Was Here (1983). The latter proved to be the creative breaking point between Shaw and the band’s other lead singer, Dennis DeYoung, but that’s now ancient history.

For nearly twenty years, Lawrence Gowan has both manned the keyboards and taken on the role of co-lead singer of Styx with a mixture of concert pianist and Broadway showman. Joining Shaw and Gowan are original members James Young (guitar) and Chuck Panozzo (bass), as well as Todd Sucherman (drums), and Ricky Phillips (guitar, bass) who have played over thirty-plus years under the iconic Styx logo. All that musicianship has inevitably moved the group towards the release something new — The Mission. And if you’re thinking “No one does concept albums today,” consider this: Styx pulls off this record exactly because it would fit so perfectly in the band’s late ‘70s and early ‘80s catalog. In fact, if you could sandwich The Mission somewhere in Styx’s platinum days, it would also be a million seller. It’s that good. This isn’t just our opinion either: Ultimate Classic Rock fans voted the release their favorite album of 2017, far ahead of Gregg Allman’s Southern Blood.

On the opening night at the Venetian, the audience got to hear selections from this new masterpiece. The setlist also included  a perfect blend of Styx’s beloved hits (“Blue Collar Man,” “Fooling Yourself,” “Renegades”), new cuts (“Gone Gone Gone,” “Radio Silence”), and Eagles covers (“Take It Easy,” “Hotel California,” “The Long Run”). There was even a masterful cover of Queen’s “Bohemian Rhapsody” by Gowan.

Still, make no mistake: This is Tommy Shaw’s band. He may be 64-years-old, but the yoga and green juice must be helping. His voice has lost nothing. He’s gone on the record as saying the band brings it organically every night. There are no backing tracks or vocals to hide any flaws. Occasionally, he hands the vocals over to Gowan for such tunes as “Lady” or “Come Sail Away,” then wanders up to an elevated stage behind Sucherman’s drum kit to play guitar. But that’s the exception, not the rule.

Styx has announced a new set of tour dates which include 2015 Rock & Roll Hall of Fame inductee, Joan Jett and Tesla. Shaw and the band are rolling from one tour to the next because that’s what they like to do. In short, Styx is still delivering onstage and in the studio. “Mission” accomplished.

PS. Reader picks for Best Concept Albums…and some concept albums you may have missed.

0 comments on “Styx in Vegas and on Mars”