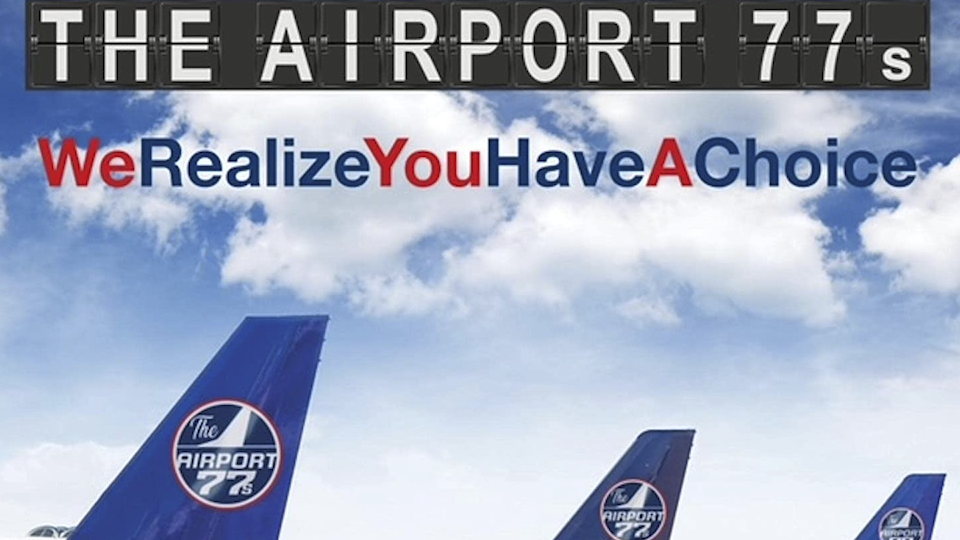 If you’ve got a yearning for some good old-fashioned power pop, look no further than We Realize You Have A Choice, the sophomore release from The Airport 77s. This Maryland-based trio excels at producing the type of rock and roll that will instantly endear them to fans of The Cars, Cheap Trick, and The Knack.

Just listen to propulsive tracks like “One Good Thing About Summer,” “The Illustrated Book of Cupid” and “Drinkin Alone.” You’ll be instantly transported back to the era of jangly guitars, in sync harmonies and sweet melodies. You’ll also be knocked out by the twists and turns of the band’s cleverly conceived lyrics.

The flight crew of The Airport 77s consists of guitarist Andy Sullivan, drummer John Kelly, and bassist Chuck Dolan. They’re all superb musicians whose deep love of power pop has inspired them to create songs steeped in the classic sounds of the genre, yet stand on their own as fabulous, original rock and roll music.

From the swirling Cars-inspired stylings of “Bad Together” to the Dwight Twilley-esque “Somebodies,” and the hard-rocking “The Way She Moves,” these songs will have you dancing around the room while trying to locate those skinny ties and other late 70s/early 80s clothing that are stored way in the back of your closet.

Much like fellow power pop heroes such as Fountains of Wayne and Matthew Sweet, the band’s music encompasses a number of musical styles and sounds, including guitar rock, synth-pop, a dash of country, and even a bit of hair metal. The band’s top-notch musicianship allows them to sound at home in every single genre they touch. We Realize You Have A Choice is filled with infectious tunes that will definitely get stuck in your head and have you spinning the disc over and over, including the crunchy “Since The Circus Left Town,” the new wave-infused “All Torn Up Over Tina,” and the boisterous “Losers Win.”

Some folks say there’s no good old-fashioned rock and roll music being produced out there these days. The Airport 77s are absolute proof that just isn’t true. We Realize You Have A Choice is a fun record, and it’s a gift to fans of rock, power pop, new wave and indie music everywhere. The first single from the disc, “One Good Thing About Summer” is available now, and the album will be released by JEM Records on September 30. You can find out more about the band at their website: http://www.airport77s.com/, and before The Airport 77s depart the runway, here’s a clip of the band rocking out to one of the true anthems of power pop.

3 comments on “Taking Off With The Airport 77s”