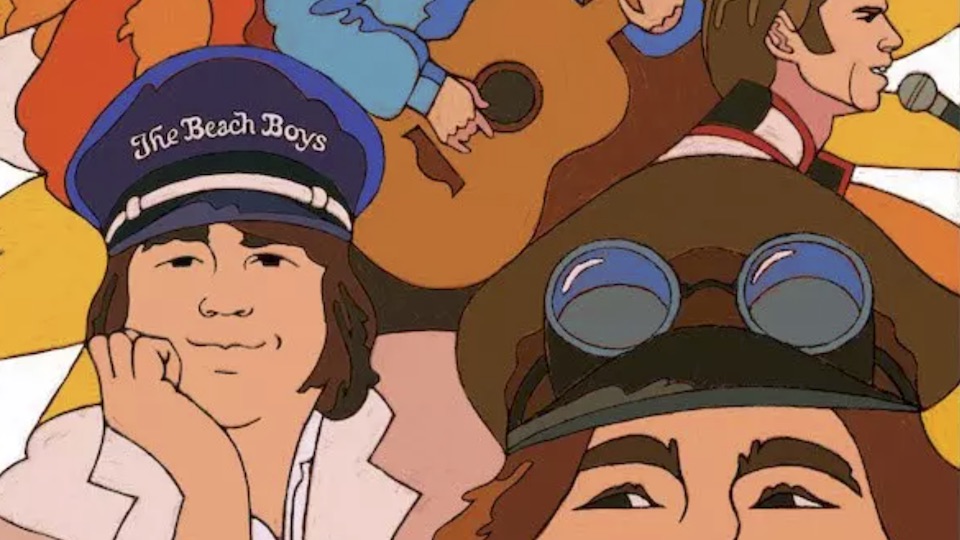 Feel Flows – The Sunflower and Surf’s Up Sessions 1969-1971 is a five-CD treasure trove of Beach Boys music containing 135 tracks, 108 of them previously unheard, including a cappella renditions from the days recording at their studio located in Brian Wilson’s home on Bellagio Road.

The set comes with a 48-page book featuring rare photos, recording artifacts, lyric sheets, an essay by Howie Edelson, tape box images, and a set of new and archival interviews. In addition to the box set, there will be a four-LP vinyl set in black as well as limited editions in translucent blue and gold colors.

Known for their classic mellow harmonies (thanks in large part to the group’s principal songwriter Brian Wilson), the set is more than a collection of infectious melodies. It’s a memory board of sorts, paying homage to an era of 60’s sand, sun, and surf from a California band who had as many hard times as they did good ones. The Beach Boys placed their musical stamp on American culture. Some surprising gems from Feel Flows include:

Mike Love’s folksy ode to the West Coast countryside has never been heard in its original form. Love wrote the song while retreating to California’s rugged canyons during a divorce.

Both songs are solo piano demos of Brian Wilson’s. In “Won’t You Tell Me,” Murry Wilson, the brothers’ dad, can be heard saying, “Best song you guys have sung for five years!”

Resident party animal Dennis Wilson wrote this wrenching harpsichord ballad during a time when (according to him) he was clean and healthy.

“Medley: All of My Love/Ecology”

Dennis Wilson, who had collaborated with Daryl Dragon of Captain and Tennille fame, stuns again in this 1971 chorale. Sadly, Dennis died tragically before realizing his dream of a solo career.

This live version is a tribute to Carl Wilson. As brother Brian said, “His spirit was probably the spirit of the Beach Boys. His voice healed me when I was going through a lot of bad things, his voice helped me out a lot.”

“Til I Die” is Brian’s elegy for his lost youth and appears on Feel Flows as a long version, instrumental piano demo with a stretched-out two-minute vibraphone intro and alternate lyrics.

A sweet lyrical fantasy about escaping to the farm for the summer with a stripped-down version of Alan Jardine and Brian Wilson’s raw vocals.

During a live performance, Mike Love tells the crowd that renowned music composer and conductor Leonard Bernstein said this was one of the best songs ever to come out of rock music. Moments later, Carl steps forward to sing and proves Bernstein right.

“Add Some Music to Your Day”

The song is a prime example of the team spirit forged during the 1969-1971 Bellagio Road-era as The Beach Boys regained their creative footing in a world that was culturally changing.