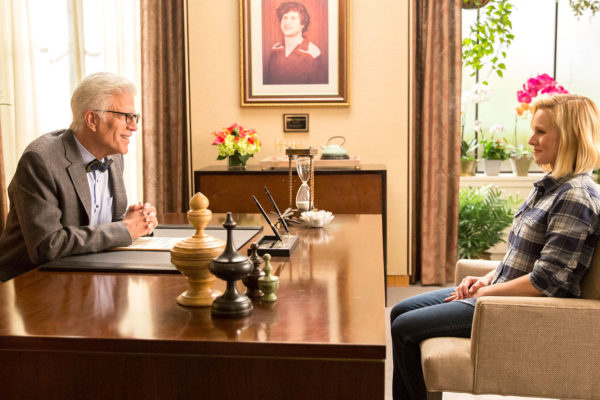 NBC, the former home of “Must See TV,” has certainly done its part to make network sitcoms less relevant. It allowed Brooklyn Nine-Nine, The Mindy Project and The Unbreakable Kimmy Schmidt, all developed in house, to find success on other networks and platforms. Instead of Seinfeld and 30 Rock, we’ve been subjected to shows like Best Time Ever With Neil Patrick Harris and whatever the hell The Mysteries of Laura is. Thankfully, if The Good Place is any indication, the Proud-as-a-Peacock network might again be in the business of making prime time shows that are, you know, actually funny. In fact, really funny.

Led by bankable big-stars Kristen Bell and Ted Danson, The Good Place tells the story of Eleanor Shellstrop, a dead-as-a-doornail telemarketer who’s accidentally found herself in Heaven, or “The Good Place,” despite living a thoroughly selfish life. Now she has to cover up the mistake, and learn to be a good person, or risk being expelled to Hell, or “The Bad Place,” for eternity. Not your typical sitcom fare, that’s for sure, having more in common with the cult classic Defending Your Life than with lead-in Superstore.
The first few episodes admittedly have some heavy lifting to do, building another plane of existence from scratch, while still finding time for character development. In lesser hands, this expositional overload could kill the comedy. Thankfully, showrunner Michael Schur (Parks and Recreation, Brooklyn Nine-Nine) is one of the best in business. He knows how to wring laughs out of sneering Eleanor and the sugary sweet existence she now finds herself living, while building this meticulously detailed world.

From the manicured mall-like décor — full of fro-yo shops and palatial palaces — we instantly feel like we understand what this “Good Place” is all about, even as we relish the ridiculousness of its architect, played with wide-eyed wonder by Danson. Surrounded by only the best and blandest, Bell comes off like a snake in Eden, and we know it’s only a matter of time before she unleashes Hell, metaphorically and literally. The fact that a 22-minute sitcom can so thoroughly draw us in with story and stakes, and not just good one-liners, is impressive. Where do you go after arriving in heaven though? Well, Schur jokes that he knows what’s ahead, having actually sought advice from Damon Lindelof, the co-creator of Lost.

The secret sauce here is that this show feels more like its cable kin than a network hit, and we mean that in the best possible way. Really, the only sitcom on the “Big Four” it compares to is Will Forte’s quirky Last Man on Earth. Much like that show, this one has a thoroughly misanthropic lead caught up in a massive story, told with a genre spin. If it turns out half as interesting and funny as the Fox hit, it has a chance to become a comedy classic. You know, it really seems like NBC can relax and follow the advice of the office wall that greets Eleanor when she first awakes in the Good Place. “Relax! Everything is fine.” For the first time in years, thanks to this unusual comedy, that just might be true.