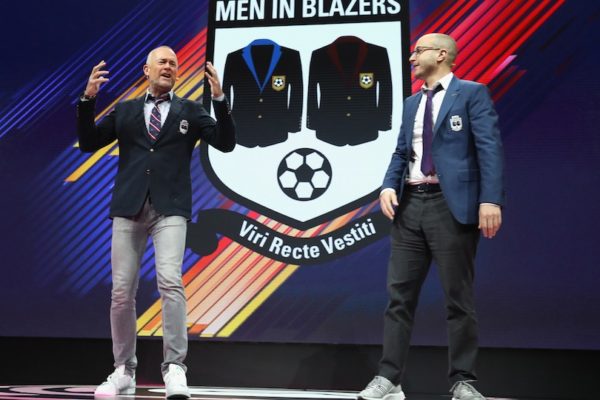 They tape their show in a space the size of a broom closet and use hand-drawn posters as graphics. They have strange obsessions with tweed, pies, gingers, balds, man buns, nipples, silly hashtags, and all sorts of cultural phenomena. But most of all, the Men in Blazers have a love for football (the sport we all call “soccah”), especially the English Premier League. And their goal is to spread that love to all Americans. The Men in Blazers are otherwise known as Michael Davies and Roger Bennett (Davo and Rog to their fans). Each Monday on NBC Sports Network, these two middle-aged (and bald) British transplants recap games from the EPL, England’s top tier of soccer. But Men in Blazers is not your typical highlights show. It is a hodgepodge of the great drama, great hilarity, and often great heartbreak that happens on and off the pitch in one of sport’s longest-running soap operas. The hosts spend the majority of their time talking about the players, managers, and fans rather than the mechanics of matches. But they do it in a seriously entertaining, funny, and relatable way (with some of the craziest references and analogies you’ll ever hear).

Davo and Rog also welcome all manner of guests into their SoHo studio (also known as the “Panic Room”) to talk football and more. They have actors, musicians, and sports stars — everyone from Laura Linney and Jason Isaacs to Mumford & Sons to Abby Wambach and Lewis Hamilton — plus others like David Simon and John Oliver.

If you’re not familiar with the Premier League, which features mammoth clubs such as Manchester United, Manchester City, Arsenal, and Chelsea, watching Men in Blazers is a great way to get educated. (In case you’re wondering, Davo supports Chelsea while Rog is a long-suffering Everton fan.) And now is a great time to get hooked on the beautiful game. It is growing here in the U.S. (no really, it is). MiB has a motto that says they are “driven by a belief that Soccer is America’s Sport of the Future. As it has been since 1972.” But the evidence of its rise is in the numbers. NBC just paid hundreds of millions of dollars to retain the rights to the EPL for the next six years. The Women’s World Cup Final last year drew a record U.S. audience for a soccer game. And Major League Soccer continues to expand, with several new teams joining over the next few years.

Davies and Bennett have so much belief in soccer’s appeal, they held the first-ever BlazerCon in Brooklyn in November 2015 (kind of like Comic-Con for soccer nerds). More than one thousand people, including yours truly, spent two days attending panels with some of the biggest names in the sport (read my write-up on the experience here).

I also had the chance to meet Davo and Rog, who were so gracious with their time with all of the fans. For those who don’t know, Michael Davies is a highly successful television producer.  As president of the production company Embassy Row, he is behind hits such as Watch What Happens Live and Wife Swap. Roger Bennett is a journalist, author, and filmmaker, who has also produced and hosted several documentaries for NBCSN. The duo grew in popularity during the 2014 World Cup while appearing on ESPN. They have hosted a popular podcast for years, something they continue to do in addition to the on-air show. But don’t think their conversations are restricted to soccer. These two have many varied interests (you’ll hear a lot about Game of Thrones, Downton Abbey, Molly Ringwald, Tracy Chapman, Guinness…I could go on and on) and share recommendations for books, music, TV, film, etc.

The Men in Blazers like to call what they do “crap” or “suboptimal,” though in reality, it’s anything but. Watch for yourself.

PS. For more great TV (non-sports related) and podcasts, check out our posts A Year of Great Television, A Guy Who Loves Cats? WTF?!?, Now THIS is Our Idea of a Musical, and Manliness Incarnate.

2 comments on “The Men in Blazers: Soccer With a Twist”