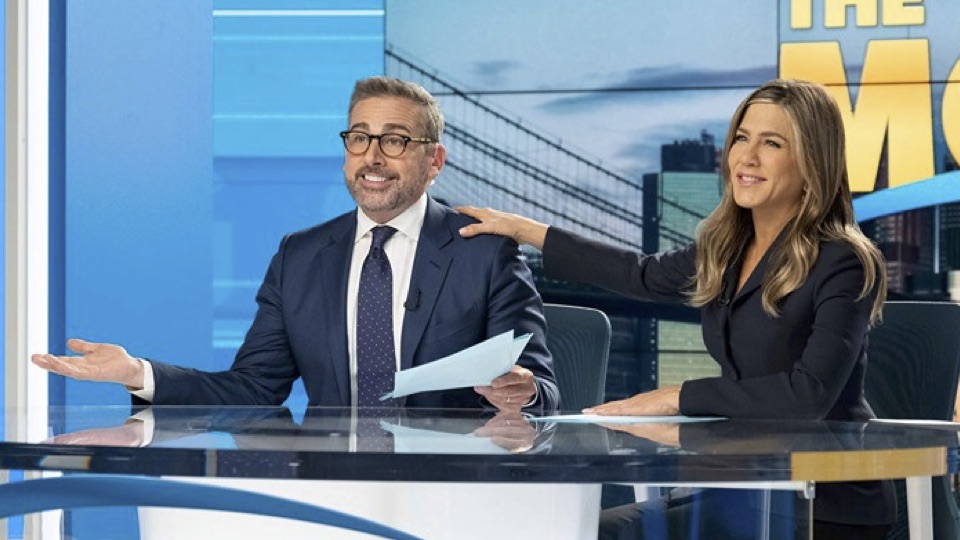 Fans of Jennifer Aniston, Reese Witherspoon, and Steve Carell can thank Apple TV+ for bringing these A-listers together along with a full cast of tremendous talent for a series that speaks to today’s #metoo climate and workplace dynamics.

The Morning Show gives a glimpse into the world of morning television – a far cry from what things appear to be when we flick our remotes to catch the day’s breaking news or some fun “fluff.”  There’s no shortage of drama, from bickering behind the camera to sexual tension…and getting in trouble because of it. Emotions run high, stress seems insurmountable, and the pressure continues to pile on.

Now several episodes in, we’ve seen the fall of a longtime anchor, Mitch Kessler (Carell), after allegations of sexual misconduct surface and shake up the newsroom. Alex Levy (Aniston) is left alone in the anchor chair to pick up the pieces and put things into perspective. Her relationship with Mitch is complex and a little too close for comfort.

Such a scenario is all too real as we’ve witnessed similar stories hit the headlines, forcing networks to get rid of some of the biggest names in the business to “do right” by the rest of the staff, alleged victims, and audiences who’d be up in arms had they not. Think Matt Lauer and Charlie Rose as prime examples.

With Kessler gone (but certainly not forgotten), a fresh-faced, no-nonsense replacement is revealed in the spunky Bradley Jackson (Witherspoon) who is suddenly thrust into the spotlight. She and Levy have a rough relationship, all while their personal lives are simultaneously unraveling.

While the show is a drama, there are laughs and lighter moments. The writing is smart and spot-on, the cast is well-coordinated, and the perspectives from the players are all nuanced and believable.

The next time you tune into Good Morning America or the Today show, you’ll wonder what sort of chaos is cooking off-camera that will never air. The Morning Show makes us realize that behind those perky personalities, there’s more than meets the eye.

Reports are that a second season is set to begin filming soon. Check out The Morning Show and binge away. Not only are the actors impeccable, but the plot is powerful. It’s a real wake-up call.

-Photo: Steve Carrell and Jennifer Aniston in “The Morning Show”