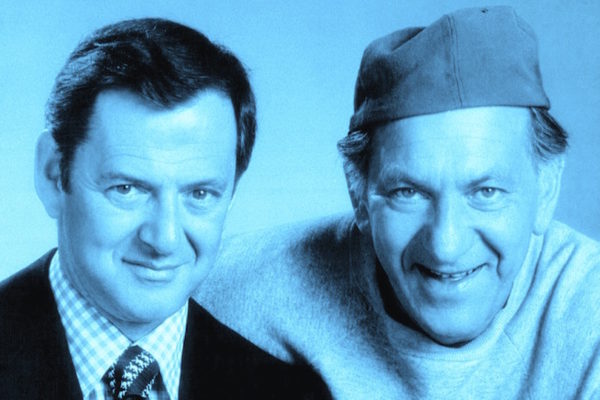 Since the beginning of time mankind has burdened itself with many deeply puzzling questions such as “Is there life after death?”, “What is the sound of one hand clapping?’ and “How much wood would a woodchuck chuck if a woodchuck could chuck wood?” Sadly, we may never know the answers, but thanks to two great bits of progress — the television and the advent of the rerun — a fourth even more significant question has emerged: “Can two divorced men share an apartment without driving each other crazy?” The answer is “of course not,” especially if the two divorced men are Oscar Madison (Jack Klugman) and Felix Unger (Tony Randall) of The Odd Couple. Below are ten episodes exemplifying the magnificence of this quintessential ‘70s sitcom.

10. Season 3, Episode 5: “I Gotta Be Me”
[amazon template=right aligned image&asin=B00US8DH5Y]Oscar and Felix are kicked out of group therapy so they try a role reversal wherein neat-freak Felix will become sloppy and vice versa. Fighting ensues until the two pals decide to dip the fork of friendship into the fondue Oscar has made. When Felix hurries to the bathroom shortly thereafter, Oscar samples the fondue and determines, it “needs ketchup.”

9. Season 2, Episode 22: “Oscar’s Promotion”
Good news! Oscar gets the once-in-a-lifetime opportunity to cover a huge wrestling exhibition between U.S. and China (Barney Miller‘s Jack Soo). Bad news! Shutterbug “Boozy” Allen is off on another bender so Oscar is forced to hire Felix as his photographer. When Felix complains that Oscar won’t look at his work, the latter replies, “I’ve seen your work — a picture of your dentist, a picture of Murray The Cop disguised as a woman, a picture of your dentist trying to pick up Murray, and a picture of your new dentist.”

8. Season 2, Episode 8: “Fat Farm
Felix is concerned about Oscar’s health: “I watched him eat eight hot dogs today and only saw him chew two.” So he convinces him to go to Berger’s Fat Farm which turns out to be some sort of dystopian madhouse where Felix enjoys the steady regimen of tortuous exercise and starvation while Oscar plans a prison-style break out to acquire cold cuts and beer from Manny’s Delicatessen. Felix then turns Oscar in and suddenly it’s like a scene out of One Flew Over the Cuckoo’s Nest. Hats off to Mel Ferber’s excellent script which helped land this one at number 58 on TV Guide’s 100 greatest TV episodes list. It’s that good!

7. Season 3, Episode 3: “The Princess”
Oscar nominee and Golden Globe winner Jean Simmons stars as Princess Lydia who Felix has been hired to photograph. Oscar however mistakes her for just another model so he invites her to a hockey game. The two fall in love. Oscar proposes. Their marriage is foiled by a prince from Iran. (“We get oil and he get’s me.”) Jack Klugman won an Emmy Award for this one. Don’t miss the opening close-up of Felix Unger’s studio a.k.a. F.U. PRODUCTIONS.

6. Season 4, Episode 3: “The Decathlon”
Oscar forgets to mail in Felix’s insurance policy which leads Felix to beg for reinstatement. After the physical, they inform him he has the body of a 17-year-old and agree to re-insure him but with the premium doubled. Alarmed by Felix’s prolonged panic, Oscar takes out his own policy at half the price. Is Oscar a better risk than Felix? Felix challenges Oscar to a decathlon to find out. Both train to exhaustion: Oscar can’t even open a can of beer and Felix tells Murray he was outrun in the park by an 80-year-woman in corrective sneakers.

4. Season 5, Episode 10: “Our Fathers”
This one is among Tony Randall’s two favorites, a flashback to Prohibition-era Chicago where Blinky Madison (a nearsighted speakeasy lookout) gets hired to kill Morris Unger (“the most beloved man in all of Chicago”). It’s a tour de force from the opening pantomime to a well-danced Charleston to a great surprise ending. (And yes the two actors play the on-screen dads).

3. Season 3, Episode 19: “My Strife in Court”
When Oscar can’t get a date to the hottest show on Broadway, Felix tries giving away the extra ticket and the boys are mistakenly arrested for scalping. During its five year run, The Odd Couple was no stranger to the courtroom but this one does it best (and provides us with one of the show’s most famous lines: “…when you ASSUME, you make an ASS of U and ME.”)

2. Season 2, Episode 4: “Sleepwalker”
In this one, Oscar’s current girlfriend doesn’t want to spend another evening listening to complaints about Felix so she suggests Oscar be nice which he does but not quite how Felix wants it. For instance, Oscar cooks two-minute eggs but Felix likes three-minute eggs. Oscar’s repressed anger leads him to sleepwalk and whack Felix in the head with a rolled up magazine.

1. Season 3, Episode 11: “Password”
We’re not the only ones who consider this the highpoint of the series. TV Guide named it the fifth greatest TV episode of all time. Game show host Allen Ludden spots Oscar in a restaurant then invites him to be on Password. Naturally, Felix invites himself to be Oscar’s partner. What happens next may be the most satisfying bits in sitcom history. They don’t win. We do.

5 comments on “From the TV Archives: The Odd Couple’s Finest Moments”