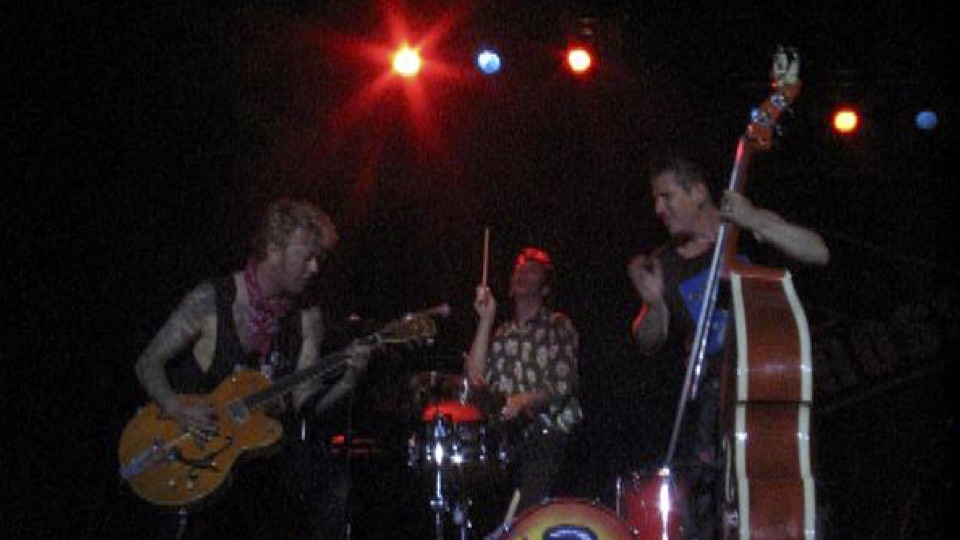 The Stray Cats are strutting their way through UK and US summer tour dates on the heels of their first release in 23 years, 40, which marks the anniversary of their birth as a band. Fear not, there are no ill-advised attempts to update their sound with auto-tune or pairings with flavor-of-the-month pop stars and rappers (the only trap beats are those that drummer Slim Jim Phantom lays down on his snare!). Retro even when they started in ’79, the Long Island trio—including guitarist/vocalist Brian Setzer and upright bass player Lee Rocker—stay true to their rockabilly roots. Here are a few highlights.

The band kickstarts the proceedings with the appropriately titled “Cat Fight (Over a Dog Like Me),” a donnybrook of a rocker similar in spirit to their 1981 hit “Rock This Town.” As the various Sun Records retrospectives have proven over the years, the rockabilly sound is somehow timeless. No matter the decade, it still sounds fresh and vital. Arguably, the Stray Cats are the most ardent and proficient keepers of that particular flame and this song does nothing to diminish that well-earned reputation.

While his fretwork is nimble as ever on this song’s tasty little lead break, a slightly gruffer-sounding Setzer offers the ultimate remedy for the common cold—that is if you’re a grizzled rock and roller. it stands to reason you wouldn’t sleep it off or walk it off. No, no, don’t be silly! When you’re a Stray Cat the best way to shake the flu is to “Rock It Off.”

The Stray Cats not only stay true to their roots, musically, lyrically their songs are often about outlaws on the lamb or trying to outrun a dark past. “Cry Danger” continues that tradition, telling the tale of a guy who seems destined to learn the hard way: You can’t go home again. The song features a Roy Orbison/ early-Beatles riff and just a cat’s whisker of fuzz on Setzer’s typically clean-sounding six-string.

Bassist Lee Rocker takes on lead vocals on this nifty little number that packs the punch of early Johnny Cash (the Man In Black is evoked in the line “sometimes things go south and you try and walk the line”) and the verve of Carl Perkins. When nothing’s going right, go left. Good advice, indeed.

Another one about the ruffians and rogues the Cats love to croon about: hard-scrabble types, just as quick to tussle with cops as they are to tangle with each other. In this one, Setzer and the boys move away from the patented slapback echo of Sun Records and veer into the reverb-soaked aesthetic surf guitar legend Dick Dale pioneered in the late 50s and early 60s.

Throughout 40, The Cats prove they’re not just a one-trick rockabilly pony. On “Desperado,” for instance, they continue to pay homage to surf rock, while adding a decidedly noirish, Spaghetti Western feel to the proceedings. Setzer’s semi-hollow body six-string is fit to the task, managing the Ventures-like whammy bar swoons and Hank Marvin-style guitar picking with characteristic authority and aplomb.

“I’ll Be Looking Out For You”

40 Producer Peter Collins helmed recordings by Bon Jovi, Air Supply, Alice Cooper and Queensrÿche (he’s also produced The Brian Setzer Orchestra. But Collins and the album’s engineers—Mike Fahey, Pete Lyman, and Sean Badum—wisely steer clear of studio trickery or fancy sonic adornments.) On songs like ”I’ll be Looking Out for You” (and most others on the LP) it sounds as if the production team mostly just turned on the equipment, set the levels and got out of the band’s way.

In the Stray Cats’ case. that’s always going to be the best approach.

[The Stray Cats tour continues to roll through its US leg with stops in Atlantic City, NJ on Aug. 3 and at The Rooftop at Pier 17 in NYC on Aug. 6.]

Photo of the Stray Cats: Wikimedia