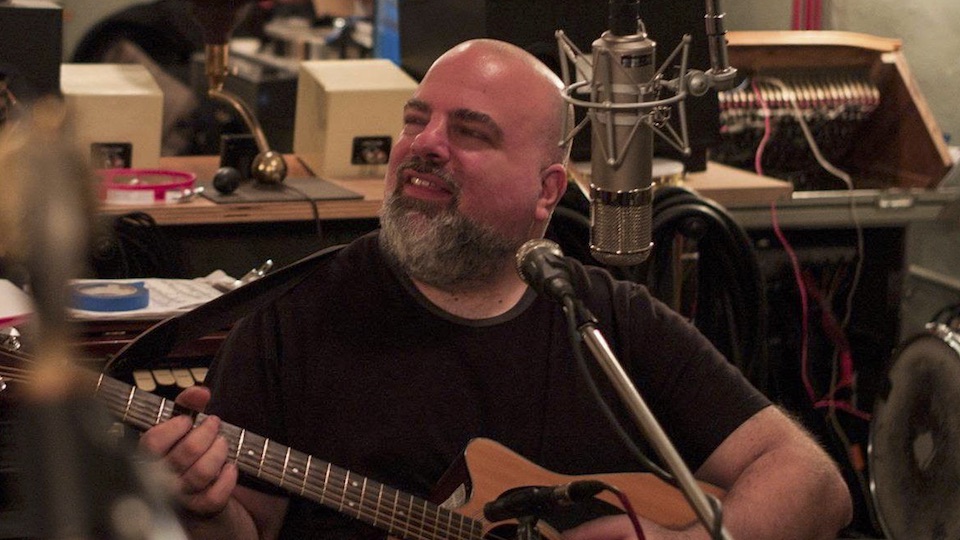 Jim Allen is a freelance journalist, whose work has appeared in Billboard, on NPR Music, RollingStone.com as well as CultureSonar. He’s also a singer-songwriter whose idiosyncratic observations and clever wordplay have enlivened records by his rock band Lazy Lions, his country combo The Ramblin’ Kind and a string of solo releases — including Where The Sunshine Bit You out this week on Hardcover Records. The LP was recorded live in the studio with no overdubs and has a loose, down-home feel to it. I recently chatted with Jim about the new album and his approach to recording and songwriting.

Q: The artists you’re compared to most often are Johnny Cash, Tom Waits, and Leonard Cohen. Do you think that’s an accurate read on your style?

A: I think it makes sense, all three of them are heroes to me, Leonard Cohen more than anybody. That said, historically it has also proven true that I tend to get compared to anybody with a low, growly voice. Years ago there was a reviewer who compared me to the guy from Crash Test Dummies! But when I was young it was Cohen that really put me on the path to being a singer/songwriter. To me his mastery at infusing songs with poetry is unparalleled. I can’t claim to have ever been as musically inventive as Waits, but his unique way of looking at the world was always huge for me too. And as a country fan, of course, Cash is up there on Mt. Rushmore for me.

Q: Who are some other influences?

How much time have you got? From early on, pretty obvious ones like Dylan, Elvis Costello, Hank Williams, Richard Thompson, and Townes Van Zandt have been at the core for me. But over the years, everybody from Mose Allison to Mark Eitzel has had an effect.

Q: What is a guy born and bred in New York City doing playing country and western music?

My mother was always a big fan, so I grew up with it, it’s part of my DNA. In my own writing, I usually like to keep the melody as streamlined as possible in order to put the focus on the lyrics, and I think a lot of that sensibility probably comes from the country influence. Plus the grass is always greener on the other side; I’m sure a lot of people grew up in Nashville loving hip-hop, just as I grew up in the Bronx loving country, among many other things.

Q: Do you have any particular favorites on the album?

Probably the first track, “All the Way Down the Line,” maybe just because it took so long to write. It’s got a lot of verses! I was going purposely prolix on that one, just because I liked the accumulated lyrical density. The album title comes from that song, from the line “Let the moonlight soothe where the sunshine bit you.”

“All the Way Down the Line”

Q: I love “Going Under” with surreal phrases like “This hole has a boat in it” …

Thanks! I like that one a lot myself. In the interest of full disclosure, that song actually started out as my attempt at writing my own version of “Walking on a Wire” by Richard Thompson, which is one of my favorite songs. So some of the lyrical direction was inspired by that. But that line in the bridge that you mentioned was my attempt at a joke. The idea is that some people might have a boat with a hole in it, but I’ve got a hole with a boat in it. A big existential chasm but one that contains a small possibility of escape. OK, dark humor I guess.

Q: You’ve said the decision to record live in the studio with no separation and lots of bleed was partly aesthetic and partly financial. Whatever the reasons, I think it sounds great but were there challenges to that approach?

Ha! Your question is only just now making me realize I could have called the album Let It Bleed if it weren’t taken! I’m glad you like the way it turned out. I’m happy with the naturalistic sound of it. It was surprisingly easy to record that way. The only time it became a challenge was during the mixing process because recording everybody together with no separation automatically limits your mixing options to a drastic extent. Fortunately, my co-producer, “Magic” Mike Jung, was in charge of both recording and mixing, and he was able to employ his expertise to make it all work.

Q: How did you meet the other musicians who played on the album?

I’m fortunate to have been friends with the guitarist, Matt Applebaum, and the drummer, Steve Goulding, for many years, and they actually both play with me in The Ramblin’ Kind. People know Steve best from playing in The Mekons, and Matt leads his own jazz trio, Dots on a Map. I first encountered the bassist, Joanna Sternberg, on the bill at Jalopy in Red Hook one night a couple of years ago. I knew from the beginning that I wanted standup bass for the album and Joanna is one of the best standup bassists I’ve heard in a long time. For what it’s worth, Joanna also happens to be a great singer/songwriter who has an excellent solo album coming out in July on Conor Oberst’s label Team Love.

Q: Do you plan to play live with the same lineup or perform these songs with some other lineup?

I’m doing a special album release show on June 2nd at The Treehouse at 2A, which is on 2nd St. and Ave. A in the East Village and I’m hoping to have at least a couple of the musicians from the album on that show, but I’ll also have a bunch of special guests that night too, so it’ll be a fun evening. Beyond that, it’s anybody’s guess. Time will undoubtedly tell.

Where The Sunshine Bit You is available starting on May 10 on Jim Allen’s Bandcamp page: www.jimallen.bandcamp.com