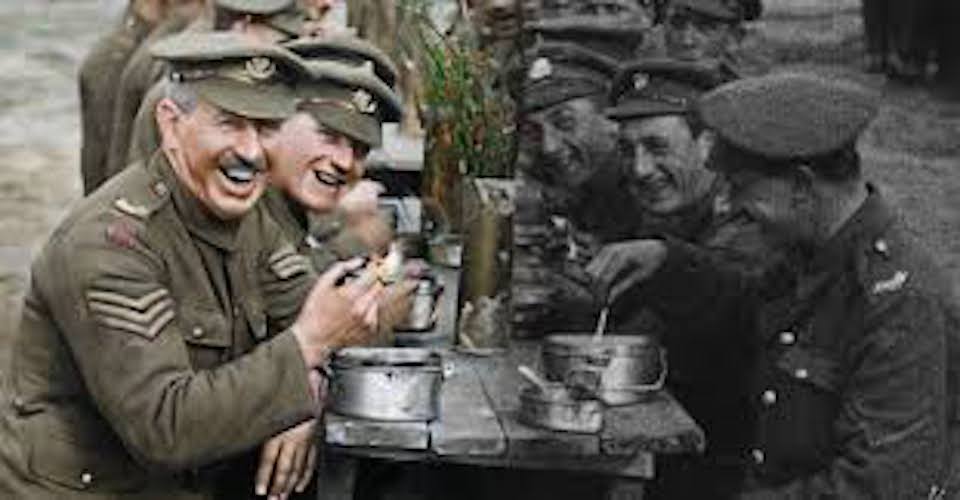 Director Peter Jackson is best-known for his epic Lord of the Rings movies. J.R.R. Tolkien began writing that sweeping tale after his own experiences during the horrifying events of WWI. So it seems fitting that Jackson’s current project offers a fresh look at the “real” Great War. They Shall Not Grow Old restores actual footage and audio of WWI, presenting it in a way that this generation has never before experienced.

Jackson was approached to commemorate the 100th anniversary of the war. Using footage and audio from Britain’s Imperial War Museum, he embarked on a four-year project carefully restoring damaged film, colorizing it and putting it back into real-time (meaning: none of the herky-jerky images resulting from the hand-cranked cameras of the day).

They Shall Not Grow Old is not just another historical war documentary. There are no maps or academic talking heads. In fact, the commentary comes directly from soldiers who were actually there, and they recall both the terror but also the camaraderie born from sharing this horrifying, miserable time. The powerful audio also includes the deafening sounds of artillery (some blasts were so loud, they could be heard 200 miles away in London; over 10 percent of French soldiers had permanent hearing issues afterward). Jackson immerses you in the relentless sonic chaos and terrifying new weaponry that was all around these young soldiers (both his and my grandfather were among them).

Related: “3 Documentaries Based On Found Footage”

As Americans, we’ve since gone through WWII, Korea, Viet Nam, Afghanistan, and so many other conflicts. But the Great War remains unique in how it tilted our worldview. At least 100 countries were involved (in varying degrees). Of the 67 million soldiers, there were 37.4 million casualties (and Jackson doesn’t shy away from showing the gruesome results of common ailments like Trench Foot and what we’d come to know as “PTSD”). Over 16 million people died.

To add even more perspective, the Battle of the Somme (1916) was the first major conflict of the war and is considered one of the bloodiest battles in all of human history. On the first day alone, over 57,000 British soldiers were killed — at the rate of one every 4 seconds. By the end of that particular battle, 1 million men had been slaughtered.

Jackson’s new documentary lets us see the faces and hear the voices of those who were in the trenches. The restoration adds haunting new depths to these images, making us experience one of the most horrifying events of the 20th century in a very 21st century way.

For the director who brought Tolkien’s epic battle between good and evil to the big screen, They Shall Not Grow Old is an apt real-world addition.

0 comments on ““They Shall Not Grow Old”: War As You’ve Never Seen It”