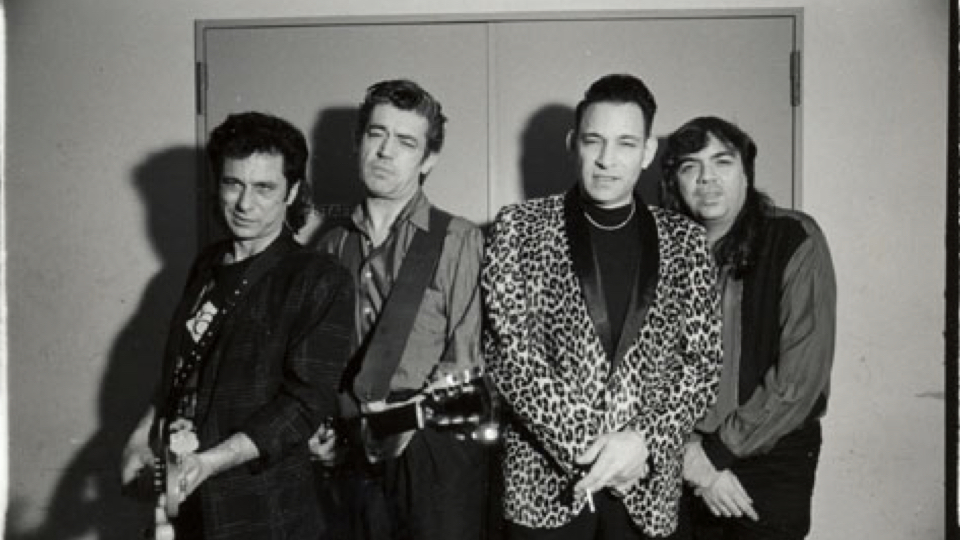 Although Robert Gordon, who recently passed, never became a major star — a victim of the usual right guy/wrong time alchemy — he was a powerhouse singer and performer, with unbelievably good taste in wingmen. (“Sidemen” doesn’t nearly do justice to the folks who played with him.)

Like many boys his age, Gordon was inspired by Elvis Presley. Unlike most of those boys, he parlayed that epiphany into an actual career. Among his many twists and turns, he found himself fronting a 70’s punk band, Tuff Darts, an early mainstay at CBGB. That, in turn, exposed him to producer Richard Gottehrer, who suggested he make a roots-rock record with the first of his monster collaborators, Link Wray.

As Gordon explained in an interview for “Guitar Player” magazine, “Link Wray was a wonderful friend. He was 20 years older than me. I first saw him when I was nine years old at an amusement park in Glen Echo, Maryland. My father took me and my brother there, and they used to have shows on the weekends. He was doing “Rumble,” and it blew me away.

When I got the deal with Private Stock [Records], Richard Gottehrer asked me who I’d like to work with. We knocked it around for a couple of weeks and then he suggested Link, and I said that would be awesome. He got Link to come to New York, and we hit it off.”

The two records they made together — “Robert Gordon with Link Wray” and “Fresh Fish Special” — were economical, pure, tuneful mini-masterpieces. It’s hard to disagree with Gordon’s own opinion that if they had been released in the MTV era, he would have been as big as subsequent rockabilly revivalists like The Stray Cats. If you were lucky enough to see him live, you’d agree, too.

Gordon was itching to try a more modern sound, so he and Wray amiably parted and Chris Spedding entered the picture, beginning 40 years of on-and-off collaboration. Where Wray was most at home tearing it up on live stages, Spedding cut his teeth in the more-controlled studio environment.

The results are equally superb. Indeed, Spedding was Gordon’s co-pilot on arguably his best record, the sublime “Rock Billie Boogie.”

And, as always, they were great live.

Which leads us to The Humbler…

If you don’t know him, spend some time YouTube-ing Danny Gatton. His chops were other-worldly. If Link Wray was a direct connection to the 50’s rockers, and Chris Spedding more of a modernist, Gatton sat somewhere in between — turbo-charging those first-generations licks. He also played on Gordon’s biggest hit, a cover of Marshall Crenshaw‘s dose of pop perfection, “Someday Someway.”

In the years that followed, Gordon never came as close to breaking through as this; but he made many more fine records and toured constantly.

While there were a lot of near-misses in Gordon’s career; he made some superb choices along the way, never more so than with the guys who shared many stages with him.

He summed it up well in the Guitar Player interview:

“The guitarists that I worked with never changed my approach to my music. I’ve always done my thing. I choose the songs, and I let the guitarists do their thing. I don’t step on their territory, but I like to hear what I like to hear, and it works out good. When you’re working with people like Chris Spedding and Danny Gatton, you don’t have to tell them too much. These guys have been there and done that, and they’re the best. I always let them do their thing before I open my mouth.”

And when he did open his mouth, wonderful things followed. We will miss him.

6 comments on “This Guy Was a Great Guitar Picker”