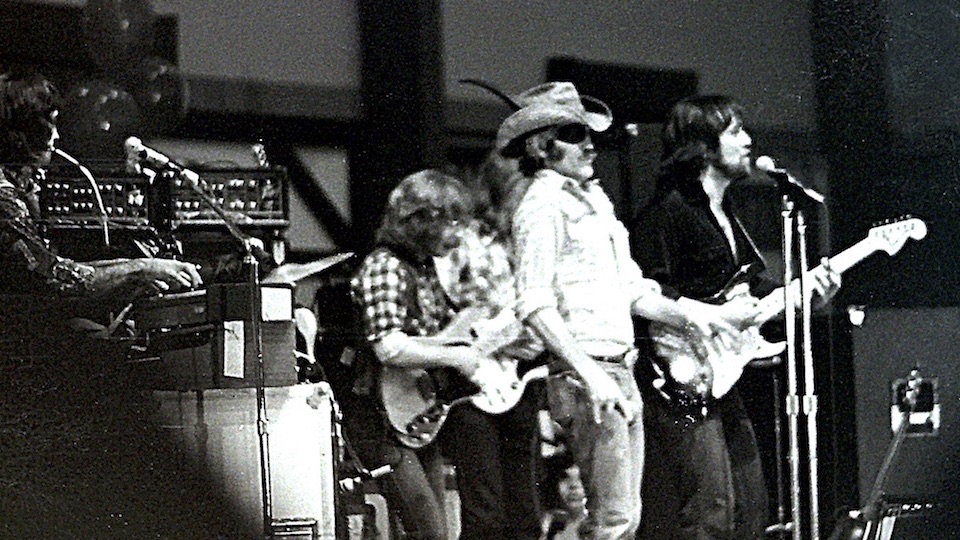 When Ray Sawyer, the eyepatch-sporting member of Dr. Hook & The Medicine Show passed away recently at the age of 81, fans were reminded of the band’s many stellar hits and smooth mix of country rock and AM radio soft rock gold. The Alabama-born Sawyer was a founding member of Dr. Hook (the shortened moniker the group eventually went by), and the band took their Captain Hook-inspired name as a nod to the eyepatch he wore after losing his right eye in a car accident.

A refreshing antidote to the seriousness of ‘70s album rock, Dr. Hook were a rough-and-tumble New Jersey bar band who broke big thanks to their musical chops and some sharp songwriting collaborators. The group scored their first hits, “Sylvia’s Mother” and “The Cover of ‘Rolling Stone” (the latter of which featured Sawyer’s distinctive growly vocals), in collaboration with children’s book author and songwriter Shel Silverstein who penned songs for several Dr. Hook albums. More hits followed until the band called it quits in 1985. Sawyer continued to tour with the group’s primary vocalist Dennis Locorriere (who owns the rights to the Dr. Hook name) until 2015 when he was sidelined for health reasons.

Thanks to their catchy hooks and spirited live performances, Dr. Hook’s music has aged far better than it has any right to. Grab a straw hat and a pair of maracas and remember Sawyer and the boys of Dr. Hook with the classic tunes below.

Dr. Hook & the Medicine Show scored a Top 10 hit with this Shel Silverstein-penned ditty that poked fun at what was once the goal of every self-respecting rock band — seeing their pretty faces on the cover of Rolling Stone Magazine. Ray Sawyer takes lead vocals here, crooning in a deep register about a “freaky ole lady name a Cocaine Katie” and “taking all kinds of pills that give us all kinds of thrills” in search of the real thrill of seeing your picture on the cover of the nation’s leading music mag. The band got their tongue-in-cheek wish in 1973 when a caricature of the members appeared on the cover of Rolling Stone. Filmmaker and Rolling Stone journalist Cameron Crowe later paid tribute to Dr. Hook by having the members of the fictional group Stillwater perform an acapella version of “The Cover of ‘Rolling Stone” in Almost Famous.

Shel Silverstein gave the band their first hit with this song based on a phone call Silverstein made to the mother of a woman he was in love with. (Yes, Sylvia and her mother are real.) Like many of Dr. Hook’s tunes, there’s an inherent likable dirtbag quality — you feel sorry for the lovelorn protagonist while also secretly hoping that “Mrs. Avery” hangs up and never again lets the gravel-voiced ruffian on the other end of the line near her precious Sylvia.

3. “Sharing the Night Together”

Following some lackluster albums, the band shortened its name to “Dr. Hook” and signed with Capitol Records in 1975. A cover of Sam Cooke’s “Only Sixteen” was a hit, as well as the backseat of a Ford Pinto make out classic “A Little Bit More.” (Take a look at Dr. Hook’s sweaty performance of the song on Don Kirshner’s Rock Concert and marvel at how far standards of rock band sexiness have come. Maroon 5 these hirsute crooners were not.) The 1978 album Pleasure & Pain saw the band diving headfirst into slow-dance ballads with their tender ode to one-night stands “Sharing the Night Together.”

2. “When You’re In Love With a Beautiful Woman”

Penned by the wonderfully-named country rocksmith Even Stevens, this ‘70s soft rock favorite hit #6 on the charts and was so good that Dr. Hook included it on both the Pleasure & Pain album and its disco-fied 1979 follow-up Sometimes You Win. Kicking off with an earworm-worthy keyboard riff, the lyrics detail the difficulties a man with a self-confessed “ego problem” has trusting the woman he loves. While the music is toe-tapping, perhaps the guy should stop “watching her eyes” and “looking for lies” and try discussing his concerns with the poor woman who has to put up with his constant jealousy.

This sultry jam hit number five on the Billboard charts and cemented Dr. Hook’s status as purveyors of killer late-night grooves. The song opens with the very Eyes Wide Shut-esque line “I was sittin’ all alone/Watching people get it on with each other.” But get your mind out of the gutter, because Dr. Hook is all about dancing and catching a gal’s sexy peepers on the dancefloor.