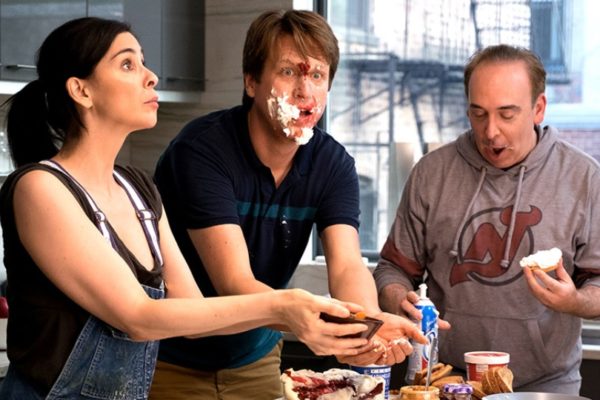 The news has been a major drag for the past few months (or years, depending on your point of view). If you’re like me, although you like “peak” TV, sometimes you need to engage in programming that helps you to take the edge off. As someone predisposed to watch a ton of shows — I work in the industry and also happen to be a television junkie — I’ve done my fair share of research and have put together the following lineup so you can laugh out loud and release a few endorphins. Think of streaming these shows as a form of self care, so it’s a win-win situation.

Laughs With Action: HBO’s Animals, Netflix’s Crazyhead and Santa Clarita Diet
Animals is a crudely animated series that takes a comical look at the lives of mammals, reptiles and even insects. Currently in its second season, this subversive show slyly covers topics like coming of age, fertility, loss, and religion to great comic effect. Human subplots raise the stakes as our species is constantly impacting our fellow residents of Earth. The voice talent is killer (Aziz Ansari, Danny McBride, Wanda Sykes, Jessica Chastain…) as are the musical numbers like “The Fox Song” by Killer Mike and Big Boi in Season 2.

Crazyhead is a delightful British confection about two young women (Cara Theobold, Susan Wokoma) who band together to fight demons and quip their way through broken friendships, bad dates and therapy sessions. Think of it as a modern day Buffy The Vampire Slayer, with enough zany plot twists to keep you on your toes. There are plenty of fight scenes too as these young ladies are capable of kicking serious butt!

Santa Clarita Diet is a super-bloody zombie sitcom about Sheila (Drew Barrymore) and Joel (Timothy Olyphant), a husband-and-wife real estate duo with a creepy catch. The female half of this power couple is undead — and requires live flesh to eat. If you can get past the vomit and gore, this show’s dialogue crackles not just with its two stars but also its supporting cast members. Whether their daughter Abby (Liv Hewson) gets infected or they get a cure for from one mysterious Czech grandmother is anyone’s guess.

Laughs With a Bit of Heart: HBO’s Crashing, Netflix’s Lovesick, Amazon Prime’s One Mississippi
In Crashing, real-life comedian Pete Holmes mines every painful detail of his struggle to make it in stand-up while his life implodes around him, starting with finding his wife (the brilliant Lauren Lapkus) in bed with another man. The show doesn’t shy away from Holmes’ sheltered Christian upbringing and many of the best moments happen when he tries to live “righteously.” The season finale, during which Pete gets cursed out by a stripper about his hypocrisy, is unforgettable. Produced by Judd Apatow, this show has plenty of street cred, thanks to guest appearances by Artie Lange, Sarah Silverman and T.J. Miller.

Lovesick (previously called Scrotal Recall) is the story of Dylan (Johnny Flynn), an unlucky-in-love young Brit diagnosed with chlamydia. Yes, you heard that right. When he decides to inform all of his previous sexual partners about his disease, complicated backstories come to the surface through a series of flashbacks. Contrary to what you might guess, this show also has a sweet unrequited love story at its center. Indeed, one of Lovesick’s finest — and funniest — moments comes when his friend Luke (Daniel Ings) uses Riverdance to win a dance battle for the affections of a girl he’s crushing on.

One Mississippi is a semi-autobiographical look at standup Tig Notaro’s life as she goes home to Mississippi to deal with the death of her mother after grappling with her own health issues. The comedy is dark (it’s created by Diablo Cody) and isn’t afraid to tackle health issues, dysfunctional family secrets, sexual abuse, career lows and clingy girlfriends. You might shed a tear in this show because there are some heavy moments, but there are plenty of funny moments to take the edge off like watching Tig react to the absurd medical procedure pitched to her by an eccentric doctor, which involved inserting someone else’s fecal matter into her intestine.

Laughs With Straight Talk: Netflix’s Chewing Gum and Amazon Prime’s Fleabag
The British import Chewing Gum features Michaela Coel, a talented physical comedienne on the rise. Often shocking and raunchy, her character Tracey is looking to lose her virginity in a world where religion, class and race all come into play. Take for instance the episode in which she dresses in an African tribal costume for a young, wealthy white man who claims he’s never dated a black woman before. Every episode, however, is peppered with Tracey’s asides to the camera during which she rants a reality in complete opposition to what we’ve seen on the camera.

Another one from the U.K., Fleabag concerns a young woman (Phoebe Waller-Bridge) making her way through modern London one cringe-worthy moment at a time. Those moments can be pretty bold but Waller-Bridge has the talent to cover both the snarky commentary and the heartbreaking truths as her character juggles guilt over the loss of her best friend and strained relationships with her dad, step-mother and older sister. Happy Days this is not.

0 comments on “When You Need to Laugh, These Series Deliver”