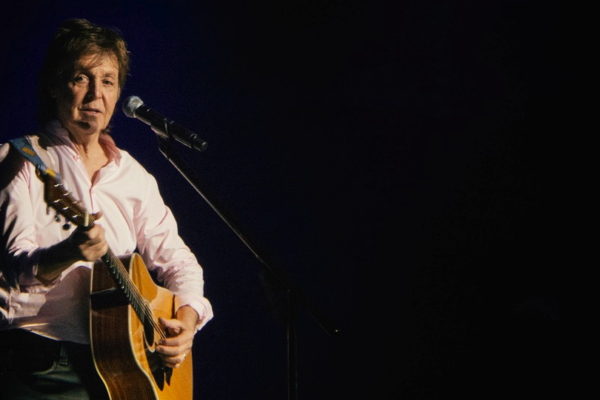 In 1987, Paul McCartney acted on a suggestion by his then manager and invited Elvis Costello to be his songwriting partner. Their work together would produce a number of finely crafted songs, including Elvis’ biggest single in the U.S. and McCartney’s last top 40 hit. Elvis Costello had burst upon the scene with 1977’s My Aim Is True — three-minute pop songs filled with all the rage and sexual frustration of punk set against the instantly hummable melodies of the Beatles and the Kinks. After a string of hits, Elvis’ chart success was waning. His most recent albums, King Of America and Blood and Chocolate, had failed to generate any hit singles.

Related: “It’s A Wonderful Life, Indeed-Paul McCartney Turns the Classic Into A Musical”

Paul McCartney had managed to survive the break up of the Beatles with a series of successful singles and albums, both as a solo artist and with his post-Beatles band Wings. Judging by record sales, he was easily the world’s most successful songwriter. In 1982, McCartney had released the critically acclaimed Tug Of War, but this had been followed by a string of critically panned and less successful albums, none of which had cracked the top 10 in the U.S.

Long before he became Elvis Costello, the young Declan MacManus had bought his first record, the Beatles’ Please Please Me. Nearly 25 years later, he was sitting next to Paul McCartney writing songs that would later appear on Costello’s Spike and Mighty Like a Rose, as well as McCartney’s Flowers in the Dirt and Off the Ground.

In Costello, McCartney found a songwriting partner like he hadn’t had since John Lennon. Like Lennon, Costello had the knack of writing biting lyrics, but always with a sense of humor. In his own lyrics, McCartney was often lacking Lennon’s voice — the one that would tell him “That’s shite [shit]!” and force him to do better. He would do some of his best lyric writing with Costello.

Costello had McCartney’s love of Broadway and jazz that had come from their musician fathers. (In fact, Costello’s father had performed “If I Had A Hammer” on the 1963 Royal Variety Show where Lennon had made his famous “rattle your jewelry” comment.) If Costello forced McCartney to focus more on his lyrics, McCartney influenced Costello’s melodies and arrangements. The two were natural collaborators.

Paul arrived at the sessions with a song that he had almost finished, “Back On My Feet,” a song that was ultimately released by McCartney as the B-side to “Once Upon A Long Ago.” It’s a better song than the A-side, a movie script disguised as a rocker. It describes a homeless man “going under” who sings “I don’t need love (though temptation is sweet)” against guitar power chords. He’s been tossed aside by a lover and spends his days “screaming at the sky.” McCartney/MacManus help the listener visualize the film:

By the bridge, the sunny McCartney comes to the front as the man decides to “… stand up again, kick up a fuss again.” But an unseen presence (Costello?) voices some doubt (“He’s a case where there’s clearly no hope”). As the movie ends…

“You Want Her Too” (a song that appeared on Flowers In The Dirt) is a duet sung by McCartney and Costello. It presents the same idea as “The Girl Is Mine,” the song McCartney wrote and sang with his last collaborator, Michael Jackson – two rivals competing for the same woman. Unlike the cringe-worthy lyrics of the latter song (“the doggone girl is mine”), “You Want Her Too” lyrics present a more complex and nuanced relationship between the three parties. “You Want Her Too” waltzes along as the singers express their ambivalence towards the woman in question as they sing to each other…

She makes me do things I don’t want to do,
I don’t know why I should be telling you.

Listening to the demo of the song, you can almost hear the fun that Costello and McCartney were having as they traded barbs and strummed their acoustic guitars. “She makes me go so wrong”, sings McCartney. “So, why don’t you lie back and enjoy it?” Costello shoots back. By the time the song lands on Flowers In The Dirt, the song’s arrangement has been fleshed out to conjure up the whirling of a carousel as if the two rivals are circling around each other ready to land a punch.

The two big singles to come out of the pair’s songwriting sessions were “Veronica” and “My Brave Face”. Costello contributed “Veronica” at their initial meeting. It was a song about his grandmother’s failing memory, too personal for Costello to accept all but a few lyrical suggestions from McCartney. Yet, it owes a strong debt to McCartney songs like “Eleanor Rigby” where an unseen observer describes a depressed character with just enough backstory to make her intriguing. Eleanor Rigby had picked up the rice in the church after weddings. In Veronica’s case, she sits in her easy chair “[picking] upon the bones of last week’s news” and dreaming of an old lover:

On the hit single, a centerpiece of Costello’s album Spike, the song is superbly arranged with glockenspiel, Chamberlin trumpet and strings, and a great bass part by McCartney, who was convinced by Costello to resurrect his famous Höfner violin bass.

Like the protagonist in “Back On My Feet”, the singer of “My Brave Face” has also lost his girl. But instead of drowning his sorrows in the bottle, he’s been “hitting the town”. He seems to be relishing his newfound freedom (“Now, I don’t have to tell anybody/When I’m going to get back”). He’s not accustomed to “the work of a housewife”, so he just breaks up his dirty dishes and throws them away.

And yet, things are not as great as they seem. The tone of the song changes after the second verse to reveal what’s really beneath his “brave face”:

Ever since you left
I have been trying to compose
A ‘baby please come home’ note meant for you.
As I clear away
Another untouched T.V. dinner
From the table I laid for two.

By the chorus, Paul has reached desperation, his voice hitting with full power as his brave face melts completely:

Like the other McCartney/MacManus songs, the catchy melody and arrangement offsets the sadness in the lyrics, whether it’s the “My Brave Face” singer slowly breaking down his veneer or Veronica’s memory drifting off to sea. You can find it in “Mistress and Maid” (from Off The Ground) as the unfulfilled wife wants to shout at her husband “Look at me/I’m afraid/See what it’s come to”. Or the singer of “So Like Candy” (from Mighty Like A Rose) looking at pictures of his lost love: “I remember the day/That picture was taken/We were so happy then.”

“Veronica” was released in February of 1989 and became the biggest single of Costello’s career. “My Brave Face” hit the airwaves in May of 1989. Its tight harmonies complete with major sixth chords harkened back to the Beatles, helping it to become McCartney’s last top 40 single. (He would hit the charts again in 2014 with a guest appearance on Kanye West’s “Only One.”)

McCartney and Costello wrote a total of twelve songs together, including “Pads, Paws, and Claws” (from Spike), “Playboy To A Man” (from Mighty Like A Rose), “The Lovers That Never Were” (from Off The Ground), “Don’t Be Careless Love” (from Flowers In The Dirt), and “That Day Is Done” (from Flowers In The Dirt). In fact, it’s the last song that gives the album it’s title – “She sprinkles flowers in the dirt/That’s when a thrill becomes a hurt.”

McCartney never again found a collaborator as good as Costello. Costello has continued to write with collaborators, including Burt Bacharach, The Roots, Allen Toussaint, and The Brodsky Quartet. But these collaborations never achieved the success of the songs he wrote with McCartney.

Will there ever be another McCartney/Costello collaboration? About 13 years ago, McCartney and Costello met up again. McCartney wrote out identical to-do lists for the two of them –

McCartney then tucked his list in a book on the shelf of his office without another word. Costello did the same when he got home, but he claims to have forgotten which book he put it in.