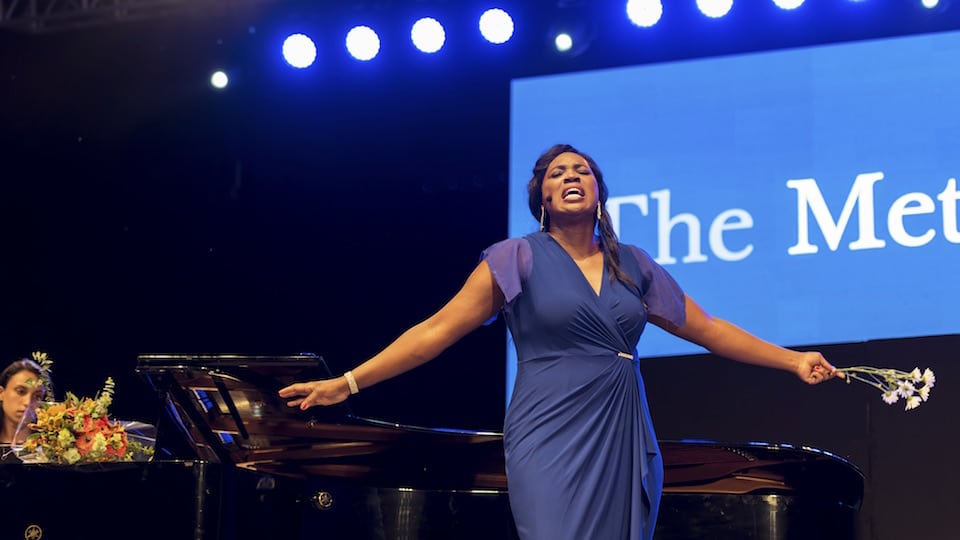 Though it has a reputation for being “entertainment for the wealthy,” live opera is a thrilling experience. The heightened storytelling, virtuosi performances, and spectacular sets and costumes continue to draw in audiences old and young while the art form itself periodically pervades pop culture in movies, advertisements, and even video games. From the stars who have left us to the ones currently with us, here is a list of eight rock stars of opera who may have your combing YouTube for more. The new school singers may even inspire you to buy season tickets so you can witness their greatness firsthand. Apologies to the contraltos and basses, you didn’t make the cut this time around.

Related Content: ”Who Are the Rock Stars of Classical Music?”

In 1955 Leontyne Price became the first African-American woman to sing a lead role (Tosca) on NBC; in 1961, her Metropolitan opera debut (Il Trovatore resulted in a standing ovation that has been reported as being 35 minutes long. With her vibrant, lustrous voice, Price’s repertoire covered Verdi, Puccini, and Mozart. Now 91, she still inspires people to talk about her dignity, grace, and contributions to the art form.

A rising star in the opera world, this talented soprano made her Metropolitan Opera debut last October in Puccini’s La Boheme to rave reviews. Opera icon Placido Domingo himself chose her to be part of his Young Artists Program at the Los Angeles Opera. Since then Blue has performed in over 44 countries, all the while gaining popularity for the beautiful timbre of her voice as well as her striking stage presence. Just check out this viral video of her showing off her chops and explaining opera while engaging with young children:

This English dramatic soprano was described as “plain” in her early career but her voice was anything but. Her interpretations of the classic Italian composers and their more contemporary English counterparts such as Benjamin Britten and Edward Elgar, transformed her into a concert hall and stage star. Baker’s personal life might not have been as colorful as other divas but her as her combination of vocal expression and stage presence is still the talk of the town.

Talk about accolades: Jamie Barton is the Winner of the 2017 Beverly Sills Award, the 2015 Richard Tucker Award, and both Main and Song Prizes at the 2013 BBC Cardiff Singer of the World Competition. Her voice has been described as having “an imperturbable steadiness of tone” and “sumptuous” and her versatile repertoire extends from Bellini to Wagner. Far from throwing attitude, she is, according to her Twitter bio, an “Opera singer with a shameless love for cat videos, sci-fi, drag queens, and all things bluegrass.“ What’s not to love?

Anyone with a rudimentary knowledge of opera knows the name Caruso, an opera star whose career was sometimes eclipsed by his offstage love affairs and run-ins with organized crime. With 863 appearances at the Met to his credit, Caruso was a global celebrity thanks to the popularity of his records as well. A darling of the media a century before the invention of social media, he might’ve attained Kanye-like levels of notoriety today if he had Twitter, Facebook, and Instagram. For now, we’ll simply have to share his digitally remastered recordings on these various platforms.

After debuting with The Barber of Seville at the Virginia Opera in 2002, Lawrence Brownlee has had several major engagements with the Met and been declared one of “the world’s leading bel canto tenors” by none other than the Associated Press. Additionally, he has a special place in his heart for spirituals and gospel which can be seen in this NPR Music Tiny Desk Concert video, and proves himself to be a performer of great passion and versatility.

A contemporary of Caruso, this Italian baritone from Pisa made over 130 records. His powerful voice combined with his imposing figure made him a sought-after guest artist with companies around the world; unlike many of his contemporaries, the “singing lion” (as he was dubbed by the press) preferred being a resident artist and opera companies gladly paid his high fees so he’d do so. Listen to today’s digitally restored recordings and you’ll see why.

This baritone fell in love in opera after listening to The Three Tenors while in middle school. Originally from Shenzen, China, he was invited by the Dean of The Manhattan School of Music to study on a full scholarship. Then, after winning various vocal competitions, he debuted as Fiorello in The Barber of Seville at the Metropolitan Opera in 2014. Hailed as one of “opera’s exciting new voices” by Opera News, he possesses a voice so sonorous that he often makes audiences forget that they are witnessing a young singer perform a much older role. Given his successes on the concert at Carnegie Hall, we can’t wait to see (and hear) what comes next.

0 comments on “Who Are the Rock Stars of Opera?”