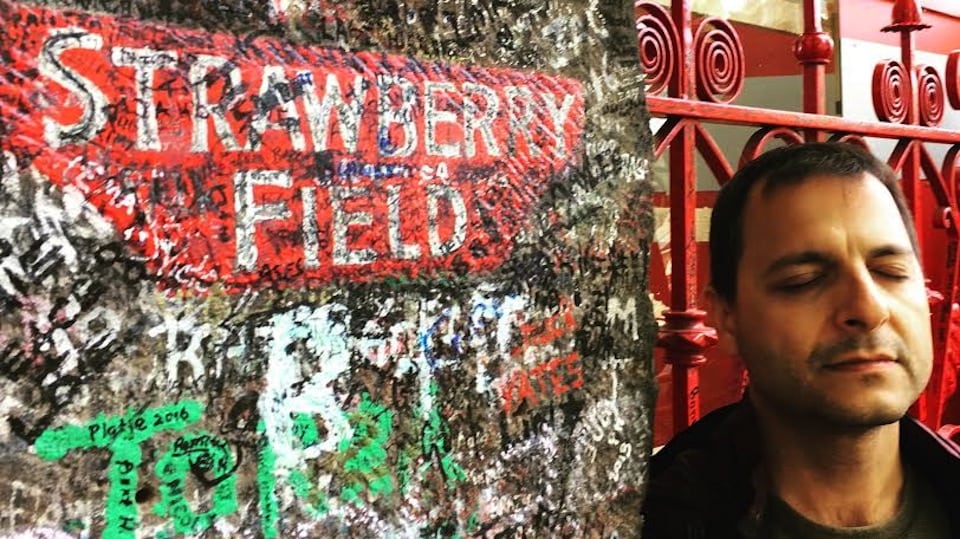 It’s every American Beatlemaniac’s dream: to go to England and visit The Beatles’ hometown of Liverpool. And so it was during our family’s summer vacation in the UK that my wife and I hopped a train from London up north to Liverpool’s Lime Street Station, to walk the streets and see the sites and soak up some Beatles mojo. But what I discovered was far more gratifying and unexpected. As amazing as it was to tour John and Paul’s childhood homes, visit the gate at Strawberry Fields and the barbershop in Penny Lane, and grab a drink at the Grapes Pub on Matthew Street opposite the Cavern, Beatles history is the tip of the iceberg in this charming, historic, dynamic city. There is a strength and grace that runs through Liverpool’s cobblestone streets and its vibrant, diverse population; it’s a direct, no-nonsense vibe that’s colored with a quick wit and a unique sense of style. The city does not, in fact, have Beatles mojo: it’s The Beatles that have Liverpool mojo!

Liverpool is rightly proud of its history but lives firmly in the present day, with an eye on a positive future. And this ideal is in fact embodied by an historic Beatles site, though not the one you’d expect. In 1958, Allan Williams (1930-2016) opened The Jacaranda Club in an abandoned watch repair shop on Slater Street, where he hosted a rich, diverse roster of Liverpool musicians ranging from an embryonic Beatles to the Royal Caribbean Steel Band. Williams ultimately became The Beatles’ first manager, and you can read up on that story elsewhere. But The Jacaranda still stands, and this summer the venue celebrated its 60th year as a flashpoint of Liverpudlian music and culture in the City Centre. Current Managing Director Graham Stanley has transformed The Jac into an innovative space, fully modern but with a warm vintage vibe, that serves just about every need for both musicians and listeners alike.

The basement stage still presents the finest local musicians and DJs (and boasts a portion of an original wall mural painted by art students John Lennon and Stuart Sutcliffe), and the ground floor is a cozy pub with a great drink selection. But Stanley has implemented a radical vision in the upstairs bar. Besides serving drinks, coffee, and cake, there’s a record shop that carries an excellent mix of classic rock, jazz, and current local indie bands. There’s also turntables installed in the booths for spinning selected open LPs from the racks (the night I stopped in, a gaggle of locals my age were non-ironically blasting ELO’s Out of the Blue at top volume over a few pints), and there’s also a restored, 1948 Voice-O-Graph recording booth (one of four in the world) that allows customers to record three minutes of sound directly to a clear vinyl disc!

Stanley believes — rightfully — that The Beatles were a part of Jacaranda history and not the other way around. The love and care that Stanley and his team have brought to maintaining and cultivating this venerable nightspot are immediately apparent to any visitor. With plans for a Jacaranda Records label and a second space recently having opened up the street (Jacaranda Records – Phase One), Graham Stanley and The Jacaranda signify the singular, forward-thinking artistic spirit of Liverpool at its best.

As for Liverpool music today, the northern port city hasn’t stopped birthing excellent bands and artists. Following a bit of research (including recommendations from Stanley himself), I’ve spent the days since my return to the states going down a rabbit hole of tremendous modern Scouser sounds! Here are some of my new personal “beyond fab” favorites: refreshing, devoid of cheap sentiment or unnecessary filler, tough on the outside but warm on the inside – like Liverpool itself.

Taking their name from a Liverpool slang response to good news (“I just found a £20 note in my trouser pocket.” “Is right!”), this tight ska-punk quartet fronted by Liverpool DJ Ché Wilson delivers ballsy, clever jams bursting over with attitude and dry humor. I picked up their “Drinking Game/Summer ’05” 45 rpm single upstairs at The Jac, but constantly streamed both tunes from their Bandcamp page until I got home.

Holly Lapsley Fletcher (aka Låpsley) released her home-recorded Monday EP on Soundcloud in 2014. Since then her rich, soulful voice topping off deep danceable grooves and dreamy soundscapes quickly caught the attention of BBC Radio 1 and listeners nationwide. Especially compelling with headphones.

This up-and-coming four-piece crafts dreamy guitar pop confection with just the right amount of edge. There’s only a handful of songs available online so far, but they effectively whet the appetite for more!

Serving up what they call “Tarantino-esque wild western vibes,” this sextet features a hard and tough rock rhythm section topped off with a solo trumpet and poetic lyrics. Powerful listening, and from what I’ve seen online they kick tremendous ass onstage.

Many thanks to Graham Stanley at The Jacaranda for his invaluable assistance with this piece, and for operating such a cool place!