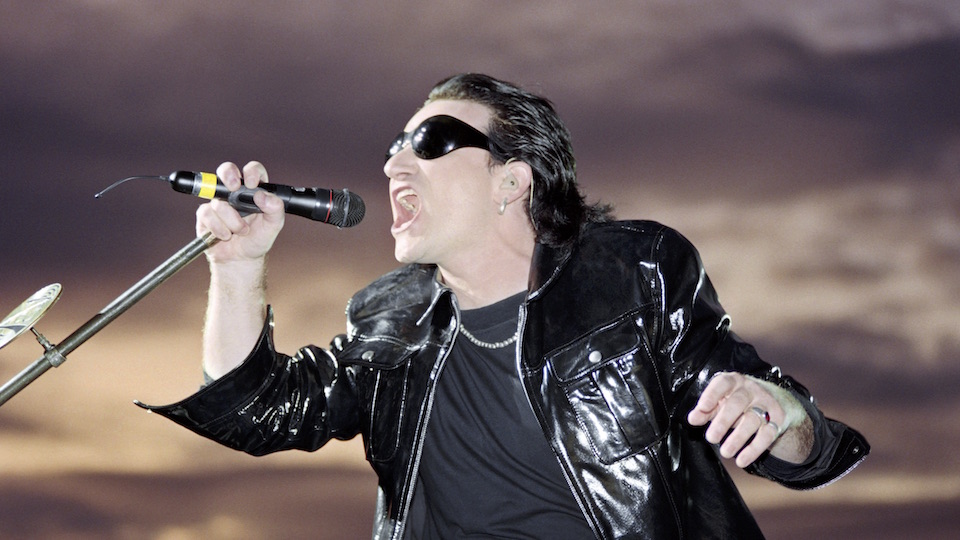 As a response to Brexit in 2018, Bono invited his fellow musicians to embrace Europe. U2 didn’t have to, though, since they’d already done so in 1991. They’d splashed post-Soviet colors on the cover of a new album on which they’d jammed to the electronic music from French clubs, and recorded many tracks in a reunited Berlin.  All the while, they were abandoning the Americana signatures with which they’d so effortlessly adopted in the late ‘80s with the proclamation that they were “cutting down the Joshua Tree.” Come the ‘90s, Bono and U2 were looking for something new, and in the beats of Berlin, they found it.

Achtung Baby is a very dark album. The band’s guitarist The Edge’s marriage was ending. Bono’s relationship with his father was as fractured as ever, and the band was admittedly overwhelmed by success (drummer Larry Mullen Jr. stated, “We were the biggest, but not the best.”) Meanwhile, bassist Adam Clayton was masking depression with alcohol, which would eventually disrupt the associated Zoo TV Tour (1992-93). Turmoil is heard in the songs: “Ultraviolet (Light My Way)” speaks of relationships spoiled by spiritual interference, “Until the End of the World” contemplates Christ’s suicide, “So Cruel” paints a male lover badly treated by his other, and “Acrobat” — written in the school of John Lennon’s Plastic Ono Band— grieves that “nothing makes sense, nothing seems to fit.”

The deliberately anti-romantic “One” proves more caustic still, its harrowing Anton Corbijn video brimming with imagery of AIDS-ridden despair while its lyrics allude to imaginary lepers and residual blame shifting. For all that, “One” remains one of the finest songs U2 has written, a soul standard that’s drawn praise from Axl Rose and Mary J. Blige, and fueled the creation of the album, which had a torturous beginning.

Later tracks are definitely more fun. “Mysterious Ways” has a joyous chorus reassuring listeners and the band that “it’s alright.” This song, featuring Adam Clayton’s most inspired dance groove, took the group into more danceable territories while the buzzing guitar-rich “The Fly” had an international scope as it reached Number One in Ireland, Italy and Spain. Toss in the album-opener “Zoo Station” which is still inviting audiences to head-bang as late as 2018, and the band’s more serious image was replaced with a spectacle of neon and multimedia. Bono cropped his hair and donned his now-signature dark shades while adorned in a leather jacket. This desire for change ultimately saved the band. “If we hadn’t done something we were excited about,” Clayton reflected later, “that made us apprehensive and challenged everything we stood for, then there would really have been no reason to carry on.”

Apprehension and challenge are at the very root of “Who’s Gonna Ride Your Wild Horses,” the final single released off of Achtung Baby, a blues-based song which producer Steve Lillywhite admitted had an easier sell in America, where the album’s industrial and electronic influences proved more of a challenge. But throughout this game-changing album, the electronica and industrial effects work like a charm as The Edge asserted a greater understanding and mastery of studio trickery and effects. Bono’s lyrics had shifted from politically extroverted to seismically introspective while the rhythms of Clayton and Mullen were more prevalent than before. At this moment when British musicianship and songwriting appears to be searching for a new muse, a look back at this highpoint from one Irish band is a good place to start, given its savvy methods of celebrating a European aesthetic.

Photo Credit: Bono performs at Vincennes racetrack on June 26, 1993 during the U2 concert, part of the U2 ‘Zoo TV Tour’. / AFP / BERTRAND GUAY (Photo credit should read BERTRAND GUAY/AFP/Getty Images)

1 comment on “U2’s Achtung Baby: Ahead of Its Time, Now Timely”