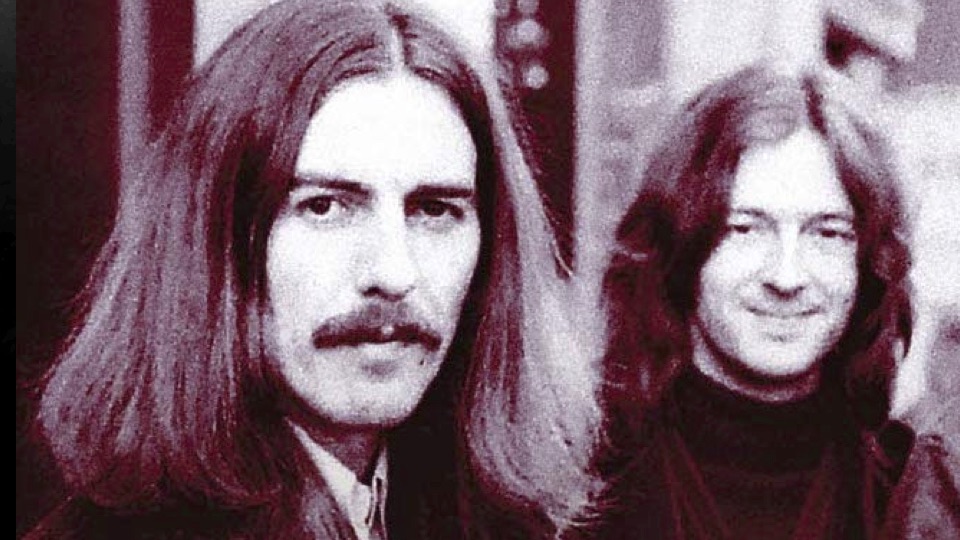 From their glistening harmonies to their rapier-sharp wit, The Beatles prided themselves on committing themselves to tape as a united front. That all changed in 1968 when Paul McCartney started recording tracks on his own, Yoko Ono started contributing lyrics to her boyfriend’s work, and George Harrison invited Eric Clapton to perform the blistering solo on “While My Guitar Gently Weeps.” As it happens, Harrison was talented enough to play the solo himself, but true to form, the Cream musician recorded one of the band’s most indelible guitar licks with tremendous power.

And so this proved the backdrop for All Things Must Pass Away, Kenneth Womack & Jason Kruppa’s treatise of the friendship between Harrison and Clapton. And it was friendship the men shared, whether enjoying Robbie Robertson’s latest composition or eating sweets together in a London garden (the latter an inspiration for Harrison’s “Savoy Truffle”). Harrison could always count on Clapton’s support, whether it was performing some of the more intricate guitar tracks on his 1970 masterpiece All Things Must Pass, or acquiescing guitar duties to Clapton at the 1971 Concert for Bangladesh.

He could never match Harrison as a songwriter, but Clapton had a purity and passion that could translate into a towering guitar piece. His “passion” turned to love, and he based his pounding “Layla” on the presence Pattie Boyd (Harrison’s wife) held – and would continue to hold – on his life.

Thereafter, Clapton made it his mission to seduce Boyd, beguiling her with letters and verses, before marrying her in 1979. In his typical dry Liverpool style, Harrison said he’d rather see her with “him than some dope”; the pair maintained a friendship that continued until the Beatle’s death in 2001. Fittingly, Clapton sang “While My Guitar Gently Weeps” at the Concert for George, turning the clock back to the song that had first bound them together.

Incredibly well-researched and written with great interest in these two conflicted artists, the book demonstrates a pair of unlikely characters sailing through one of the most colorful decades of the last hundred years. Replete with quotes, the book shows the two at their most vulnerable, but the most surprising thing isn’t how much they influenced each other’s lives, but the manner in which they slipped into each other’s work. From their time working with Bonnie & Delaney, both musicians emerged with greater recognition of their talents as musicians. Harrison left the 1969 tour with a desire to improve himself as a slide musician, while Clapton had the blueprints of a band that would become Derek & The Dominos. “Delaney,” said Clapton, “had brought something out in me that I didn’t know I had.”

It’s well known that The Dominos worked with Harrison on his debut album, but what’s more surprising is how much they completed in a comparatively short period of time. The authors surmise that the band, despite their reputation as the “in-house band,” contributed little more than a week of work to an album rich with guitar effect.

Clapton, however, stood guard, performing on many of the compositions, from the mournful “I’d Have You Anytime” to the magnificent “My Sweet Lord.” His guitar, locking into Harrison’s voice, helped him as he journeyed from the rock-heavy antics of Cream/Blind Faith, into the more soulful territory his 70s work would take him. “It’s a question of mutual respect,” Clapton aptly said. “I have a great deal of respect for [Harrison] because there have probably been a thousand times when he wanted to quit the Beatles and do something on his own…Paradoxically, he respects me for having the courage to walk out on groups because I don’t like what I am doing. He has often said to me that he does not see me in any band for very long, and I think he has a strange regard for my facing up to impossible situations and just cutting out. But he never has.”

3 comments on ““All Things Must Pass Away”: Harrison & Clapton”