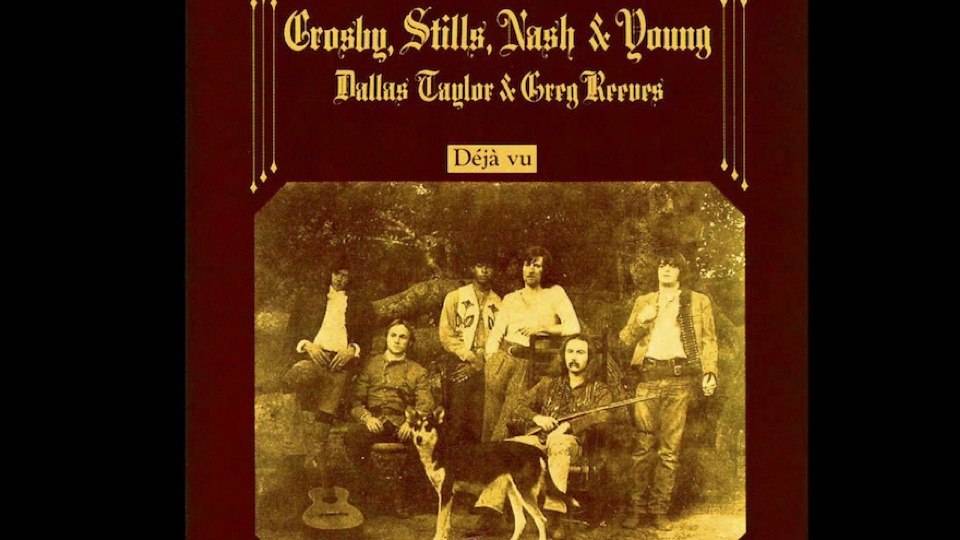 Guitarist Graham Nash knew Stephen Stills and David Crosby socially as two of the pedestrians who walked the Los Angeles streets during the sixties. An Englishman by birth, Nash’s voice slipped beautifully among them. Nash knew then that he had to quit The Hollies, what with the other two free of musical engagements and this fresh sound ringing in his ears. So, he upped and left to record an album with Crosby and Stills.

Their first work made no attempt to wash their listeners with any imposing moniker. Instead, Crosby, Stills & Nash (1969) showcased a rustic chamber-piece that still stands as one of the 60s’ more impressive works.

Even as that decade ended, Crosby, Stills & Nash were more reverent of the era, their tasty “Woodstock” cover mindful of the musical tent-pole they’d performed with Jimi Hendrix, Janis Joplin, and The Who.

Yet there was more to their palette than nostalgia. Their second album might have been called Déjà Vu, yet every note presented was modern invention and intricacy. Neil Young was now credited as a fourth frontman, his distinctive work making him an obvious candidate to fill out the album’s material. Not since The White Album had a work featured such coherent individuality.

The work is excellent. There’s Crosby’s blistering “Almost Cut My Hair,” Nash’s jaunty “Our House” before the elegiac “Everybody I Love You” closes out the record. A rare Stills and Young co-write, the album reunited the Buffalo Springfield bandmates. Buffalo Springfield was inducted into the Rock and Roll of Fame in 1997. Young was previously inducted as a solo artist in 1995, though tellingly his name did not join Crosby, Stills & Nash during their ceremony.

His was the career that ran most separately to the group. Regularly absent from the songs that weren’t of his writing, Young’s most astonishing contributions to the group were his lyrics. The dream-like “Country Girl” and rueful “Helpless” stand as two of the record’s more exceptional moments. His bandmates joined him on the simmering chorus of “Helpless,” a choral line that Rick Danko and Robbie Robertson later reimagined during Young’s performance at The Last Waltz.

That the quartet could achieve such fame despite their disparate nations (America, Britain, and Canada) showed their effortless talent. Simply listen to the vocal weaving over “Carry On,” Stills’ opener.

A somber acoustic piece, it may have influenced Led Zeppelin’s “Friends” (Robert Plant was photographed at their Wembley Stadium concert in 1974). Drummer Dallas Taylor proved the album’s bedrock, while The Grateful Dead’s Jerry Garcia guested on “Teach Your Children.” Crosby, Stills & Nash sang “Teach Your Children” at Live Aid, the somber piece mellowing its audience after a thunderous torrent of rock riffs and keyboard pieces.

The configuration worked both with and without Young. Yet there was a power to the four-piece, as they produced something intangible that could only grow. As the 70s passed into the 80s, Crosby, Stills & Nash found their fortunes restored when they reunited with Young for the platinum-selling American Dream (1988). By then they´d literally achieved “déjà vu.” Which said everything about the quality of their second release!