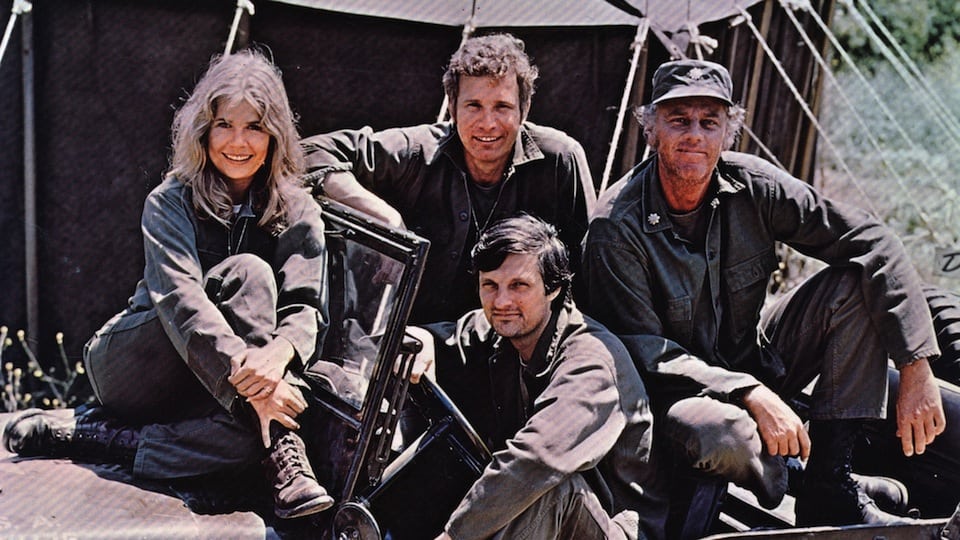 Few properties have made the jump from “success on the big screen” to “success on the small screen” as memorably as M*A*S*H. The iconic show ran from 1972 to 1983, for 11 seasons and 256 episodes;  the series finale set the record for most watched TV program ever (until the 2010 Super Bowl). Needless to say, M*A*S*H is packed with classic episodes — some of which fell on the side of the harsh realism of war and others which reveled in utter absurdity. Superfans would claim that selecting the Ten Best Episodes was a goal bordering on insanity. Yet, here we go!

Hawkeye (Alan Alda), B.J. (Mike Farrell) and Radar (Gary Burghoff) help a nurse sneak off for a rendezvous with her visiting husband. When head nurse Margaret “Hot Lips” Houlihan (Loretta Swit) finds out, she feels betrayed and becomes even stricter than usual. Eventually, she breaks down and shares some hard truths thereby showing a tender side to her character. (Which may be why Swit claimed this episode was one of her favorites.)

Alda was an actor with a range — he could be comic; he could be poignant — and this early episode lets him show both sides. When Hawkeye goes without sleep for days because of constant disruptions, he eventually starts to lose his mind. He argues with a helicopter pilot about always bringing in wounded soldiers then sends an angry telegram to President Truman asking “Who’s responsible?” for the war. When Major Frank Burns (Larry Linville) suggests that the cause of the conflict is North Koreans who’ve never seen latrines, Hawkeye decides to take pictures of the outhouses and get those pics to the enemy. Silly and dark, “Dr. Pierce and Mr. Hyde” really embodies how disturbing war can be.

When Hot Lips becomes stressed out about a visit from a high-ranking nurse, she starts making mistakes in the operating room so Hawkeye dismisses her. But when Frank comes to her defense, Hawkeye punches him in the eye. Burns subsequently forces Hawkeye to be placed under arrest and the rest of the episode involves Hawkeye’s allies sneaking him treats and conjuring up fake assault charges against Frank who eventually drops his case. A funny plot twist related to the visiting official only adds to the entertainment.

By Season 8, the series had really hit its stride. This episode takes place in real time as a soldier with a shredded aorta is kept alive while the staff searches for a replacement. A countdown clock keeps the viewer aware that the surgeons have only 24 minutes until this soldier will die. The episode — which takes place entirely in the operating room — ends poignantly and punches up the drama throughout by dropping the laugh track. If you’re wondering about 24’s precedents, here you go. Brilliant!

In some ways, you can track the ongoing battle between Frank and Hawkeye / Trapper John McIntyre (Wayne Rogers) back to “5 O’Clock Charlie.” When a North Korean pilot in a vintage warplane keeps dropping bombs by hand, his attacks become a weird source of humor for the camp, with people betting on when he’ll return and what damage he’ll do. While Burns wants to shoot down the plane, Hawkeye opposes the plan — at its core, this one is asking us whether violence can only escalate violence. Still a timely question.

Fittingly concluding with the armistice, this finale finds each of the characters both elated about going home and emotional about leaving their comrades. In the process, we find out just a little more about everyone. Definitely, a tearjerker. Side note: Urban legend has it that after the show concluded in NYC, water reserves were seriously depleted as everyone ran to the restroom after holding it in for the program.

Another Burns versus Hawkeye episode, this one sees Burns accusing his nemesis of mutiny while Colonel Potter (Harry Morgan) is away. When Hawkeye revolts against the newly instituted rules, Burns grows more and more manic, and eventually cracks under pressure. Once Hawkeye is cleared, the presiding court officer issues this classic line to Frank: “If you hadn’t been drafted as a doctor, I think you’d have been assigned as a pastry chef.”

When Potter returns from Tokyo, he’s uncharacteristically surly. And while the crew attempts to find out the source of his discontent, Hawkeye himself is busy overseeing refugee children suffering from a mysterious rash. Ultimately, Potter confesses his mood is because the last of his WWI buddies has died. Through the camp’s efforts, however, he realizes the wonderful new friends he has made at the M*A*S*H unit. This is Harry Morgan at his best. (He won an Emmy in 1980.)

The first major character to leave M*A*S*H was Lieutenant Colonel Henry Blake (Maclean Stevenson) when he’s given his discharge papers. The first half of the episode is all long goodbyes and reminiscing. The second half finds doctors called into surgery where they’re both sad about their departing friend but relieved someone is going home. The dramatic ending was a surprise even to the actors and the camera captures their genuine reactions. It’s a stunner.

The plot is fairly straightforward: After supplies are donated to a nearby orphanage, Hawkeye and Trapper bluff that a nonexistent Captain Tuttle approved their charitable action. Subsequently, the fictitious character is used by various members of the 4077th to excuse all sorts of behavior. When Hawkeye declares Tuttle “Officer of the Day,” Burns becomes enraged. But before he can track him, the nonexistent officer meets an unfortunate demise, complete with a somber eulogy.

0 comments on “From the TV Archives: “M*A*S*H”’s Finest Moments”