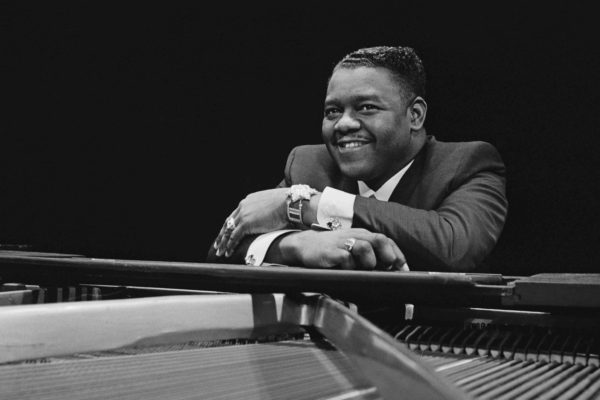 Elvis Costello once said that, for him, the term “Rock Star” conjured up images of “a guy, thin as a blade, with his shirt open.” No one would argue that his stereotypical view has validity, yet there are many exceptions. These calorically challenged artists have made a significant mark in the history of rock. In all cases, what heavyweights lack in the typecast image, they’ve made up for it in sheer talent and tenacity.

Discovered playing at a backyard barbeque by New Orleans band leader Billy Diamond, the 14-year-old Boogie Woogie piano player, Antonine Dominique Jr. would write his very first hit and paint a self-portrait in “The Fat Man.” With the lyrics like:

“They call, they call me the fat man/´Cause I weigh 200 pounds

This single would be considered by historians as the first Rock & Roll single to sell one million records and launch a career that would sell over 65 million in Domino’s lifetime. The other big tunes would soon come, (“Ain’t That a Shame”, “Blueberry Hill”), but before all that, it would be Diamond who would name him “Fats”, just so no one could miss the point (and to recognize his big appetite).

With a roster of musical works that can outrun many of her contemporaries, Mama Cass (born Ellen Naomi Cohen) became the media star of The Mamas & The Papas. That is, her big voice, big personality and big physical presence naturally took the spotlight. She was the talk of the band, and her fans giggled at her big body jiggle as she danced. By her early 30s, Cass was hosting her own TV variety specials and was part of the Hollywood scene. But eventually, her lifestyle developed into unhealthy habits.

She died at 32 in Mayfair, London. Her cause of death became the fodder for an urban legend that has nearly eclipsed the productive side of Cass Elliot’s legacy. Shortly after her death, it was reported in the press that she had choked on a ham sandwich while in her sleep. That story (or its speculation) grew tremendously and stayed that way for years in the minds of fans and media. Although an official autopsy found her cause of death to be of heart failure, and no food was found in her windpipe (nor drugs), the ham sandwich story stuck. So, why the legend?

As time has helped unravel this story, it has been deemed that a stray quote from the London’s Metropolitan Police that stated they found a half-eaten ham sandwich in her room was then attached to the cause of death by the press (or some say by her manager, to protect against Cass’s posthumous reputation as a drug user). Fake news perhaps, but the most interesting fact about Cass Elliott’s passing is where she died. It was in the borrowed Mayfair flat of the musician (and John Lennon pal) Harry Nilsson; the very same flat where Who drummer Keith Moon would also die in his sleep, a mere 4 years later (also at age 32).

Not everyone in BTO was overweight. But in the early days, the three Bachman brothers all had the same heft, causing them to joke that their type of bodies was built to “keep the groupies away.” For a band that took the mick out of themselves when referencing the Yes album Fragile by naming their 1974 world blockbuster album Not Fragile, (“You Ain’t Seen Nothing Yet,” “Roll On Down the Highway”), anyone could believe that BTO was irreverent about themselves and their size. There was never anything dainty about Bachman-Turner Overdrive.

But leader Randy Bachman had to eventually face serious health problems due to his weight. Ballooning to 360 lbs, he suffered from constant back and knee pain that made touring almost impossible. When his private doctor graded him “morbidly obese,” the jokes stopped. Having heard from his friend Brian Wilson (Beach Boys) who had experienced success when going under bariatric surgery, Bachman took the risk of having the procedure done around 2006. He eventually lost 155 pounds reaching his boxing weight of 225lbs.

It’s been said that Randy Bachman (who is still with us) has had two connections with his childhood hero Elvis Presley. The first was that he and Elvis battled weight at the same time in their lives. The second was that Elvis famously took on the public motto of “Takin’ Care Of Business in a flash” based on Randy’s 1973 gigantic hit, “Takin’ Care of Business” (it has been reported that “TCB” was, at one point, the most licensed song in the huge Sony Music’s publishing catalog). Elvis would call his musicians the “TCB Band” and in his final years of touring his private airplane sported a painted TBC lightning bolt logo.

For a man who called his second solo album The Great Fatsby, Leslie West was never shy of his physical presence. Someone this big HAD to be exceptional. He soon understood this and put himself in the position to embrace it to his advantage.

When approaching Producer Felix Pappalardi to play bass (and to eventually join Mountain) for his first recording project, Leslie shared in a 1987 interview “I conned Felix into playing bass, and that’s how we did my album. How’d I con him? I said, ‘There’s never been a fat and a skinny guy onstage; we can’t miss.’ I was terrified, but he bought it hook, line and sinker!” Soon they would record “Mississippi Queen” together producing their best well-known hit.

Born Leslie Abel Weinstein, he often poured his oversized body into a skin-tight costume for the stage. This didn’t always play well, his size distracted the fans from his immense guitar talent and it became a point of mockery for others. Recalling Mountain’s Woodstock performance memories, he shared, “I remember getting in the helicopter – we had to rent our own helicopter to get up there, with the traffic and all. The helicopter pilot was a wise guy. He said he wouldn’t take all of us at once ‘cause I was too heavy!”

In an all too familiar story, his weight and drug use began to take their toll on Leslie in the late 1970s. Soon he was diagnosed with diabetes, and he struggled with fluctuating body weight, eventually facing a bout (and recovery) from bladder cancer. By 2011, due to complications from life-long smoking and his diabetes, his left leg had to be amputated. Subsequently, West carried on making stage appearances in a wheelchair until he succumbed to cardiac arrest in December 2020.

Marvin Lee Aday’s size preceded his very big talent and voice. Although never fully substantiated, it has been reported that the man who would become Meatloaf intentionally gained 60 pounds to fail his physical for the Vietnam War draft. This is in doubt as he has stated in subsequent interviews that he put the weight on (240lbs) many years before at age 18 in order to play football for his Texas high school. He also added that his nickname started when he inadvertently stepped on a football coach’s foot, and the coach yelled, “Get off my foot, you hunk of meatloaf!”

There are many elements of Meatloaf’s history that people would find difficult to get their head around, given his body type. The artist behind the blockbuster 1976 album Bat Out Of Hell was a cast member at the Broadway Theater’s production of Hair in the early 70s (yes, with on-stage nudity!). He was rebuffed by the highly committed vegetarian K.D. Lang, who would not agree to be introduced to him because his name included MEAT. What K.D. and many others didn’t know was that he never considered himself an out-of-control- overweight person. The man called “Meat” was a vegetarian for 11 years, dropping from 265 lbs to his “standard weight” of 195 lbs. He went back to eating meat after that period because he felt “I didn’t need [vegetarianism] anymore.”

In his later years, he took on the unlikely role of giving weight loss tips to the public- “I will tell you how to lose weight. Look at the fat and sugar content. Don’t worry about the calories.” Meatloaf left us on January 20, 2022, with no official cause of death posted. He was reportedly ill with COVID shortly before his announced passing.

3 comments on “Hooray for the Heavyweights of Rock”