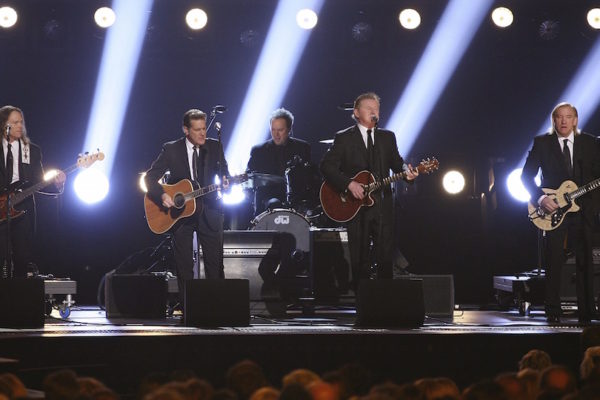 You know it right when you hear the drum intro.

The Eagles’ long-awaited follow-up to their monstrous Hotel California was the end of the group. The decade-long party was coming to a screeching halt from all of the non-stop excess that engulfed the band and you could hear it seeping through the speakers. After waiting three years, audiences were disappointed by the impossible expectations the band had to live up to, and so was the group itself. But in retrospect, The Long Run proves to be one of, if not the most significant album in the Eagles’ catalog.

The story of The Long Run starts backstage at the Orange Bowl in Miami in the mid-70s. Founding Eagles member Bernie Leadon finds himself at ends with singer Glenn Frey on the future of the group. In a momentary lapse of judgment, Leadon pours his beer out on Frey’s head telling him to “chill out, man.” Knowingly or not Leadon had just successfully punched his ticket out of the band, paving the way for established wildman Joe Walsh to enter the Eagles fold as their newest guitarist.

Walsh’s incorporation broadened the group’s musical prowess not only due to his musical ability but his grandiose sense of humor and adventure. His guitar technique helped transform Hotel California into a decade-defining record with guitar-driven hits in “Life in the Fast Lane” as well as the album’s title track. The record launched the Eagles into the highest echelons of the 1976 music scene. It was a new era, the one Frey and Henley had envisioned for years. But The Eagles’ newfound success brought more than just fame and fortune: it brought harrowing pressure to deliver and amplified tensions between each member.

Coming off the massive success of Hotel California, The Eagles were determined not to rest on their laurels. They wanted to ensure their new album would be of the highest quality. In 1978, after spending an exhausting amount of time on the road, the band rolled into the studio to record their highly expected follow-up. There was only one problem – no one had written any songs.

Over the next 18 months, The Eagles would travel to five recording studios in search of perfection. The record didn’t hold a lot of room for five personalities looking to exhibit their own songwriting talents, so each member worked on their best offerings supervised by Don Henley and Glenn Frey. The only thing each song was fueled by (more than excessive drug use) was the creative competition to outdo one another. It resulted in the sound of five solo artists on one album. Although this seemingly unhealthy situation helped forward the decline of the group, it provided more variety than any Eagles album before it and is exactly what makes The Eagles’ Long Run album one of the greatest in their catalog.

The Long Run (Don Henley) – The album’s title track was finely tuned over and over again by Henley. The ode to the end of the Eagles might be the group’s most infectious track of all time that will have you singing, “Did you do it for love? Did you do it for money? Did you do it for spite? Did you think you had to, honey?!” at the top of your lungs every time.

I Can’t Tell You Why (Timothy B. Schmidt) – Newly-acquired bassist Timothy B. Schmidt was given an opportunity to prove himself — and did not disappoint. The simplistic soul track came to be one of the smoothest songs to ever be released under The Eagles’ name. Halfway through recording the song, Henley looked at Schmidt and simply said, “There’s your hit.”

In The City (Joe Walsh) – Often considered one of Walsh’s best compositions of his career, “In The City” was the moment Walsh showed what the Eagles were capable of in a rock n’ roll degree. The Eagles took Walsh’s contribution to The Warriors soundtrack and remixed it around their signature sound to showcase the display of harmonies, build, and overall rock aura.

Those Shoes (Don Felder) –Guitarist Don Felder wanted more stake in the band. To capitalize on his Long Run opportunity, Felder took advantage of his relationship with Walsh to create a song with harmonious talk-boxes behind Henley’s rugged vocals, making it one of the heaviest tracks on the album.

But of all the songs on The Long Run, it’s the album’s ender that perfectly encapsulates the core reality The Eagles found themselves in. “The Sad Café” comes in after the string of coked-out rockers that dominated the album’s second side. The song, penned by Walsh, was an ode to the Troubadour club that helped give life to the beginning of the Eagles. Ironically, the song would close out the band’s classic era. It wasn’t The Eagles’ greatest offering, but it was the one perfect for the moment.

The Long Run quickly became platinum-certified and won a Grammy for Best Rock Performance by a group (“Heartache Tonight”) but the damage was done. Despite big sales, critics and fans alike were disappointed. The group would go on to implode within a year of the album’s release.

All the years of drug abuse, egos, and superstardom came crashing down on July 31st, 1980. Frey overheard Felder make a snide comment to Senator Alan Cranston for whom the band was about to play a benefit gig. Frey found himself in a fit of black-out anger, and microphones picked up the animosity in-between songs:

DF: Yeah you are too, the way you handle people. Except for the people you pay, nobody gives a shit about it.

GF: Fuck you, I’ve been paying you for seven years you fuck head… I’m gonna fuckin kill you, I can’t wait

When the concert ended, Felder ran off stage, smashed his guitar, and rode off in his limousine. At that moment, it was clear the Eagles’ own long run was over.

Each member went on to enjoy successful solo careers (to varying degrees) over the next decade. Inevitably there were a handful of reunion tours and albums released in the past thirty years, but the group could never pick up on the magic they struck in the 1970s.

Many look poorly upon The Long Run, given the impossible standards it had to live up to. In hindsight though, the album was a case study of five artists seeking perfection only to indirectly display their internal flaws to an audience eagerly putting the group under the microscope. It’s unfortunate that we never got to see the Joe Walsh/Eagles era blossom beyond two albums, but we shouldn’t overlook what was released. Throughout its imperfections, the Eagles were able to release an album that found a phenomenal group in their prime, at the end of their rope, and still able to compile a masterpiece. To me, it will always be the definitive Eagles album.

Photo of The Eagles (Getty Images)

9 comments on “In Defense of The Eagles’ “The Long Run””