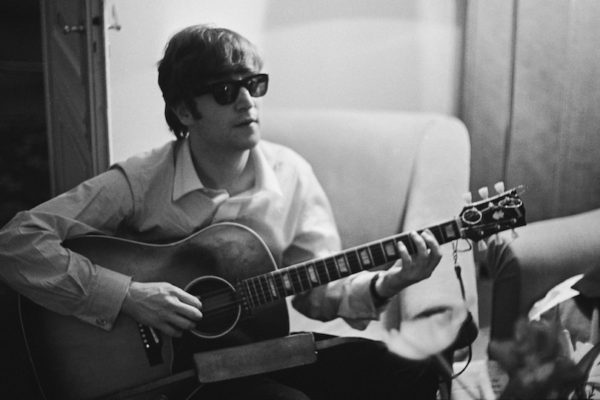 With the “Revolver” set getting so much love, it seems a good time to revisit a post from a few years back — and appreciate a less-celebrated aspect of The Beatles’ collective genius: John Lennon’s guitar playing.

As with any masterpiece, Beatles’ music opens a new door with each visit. No matter how many times you hear the songs, there’s always something fresh to appreciate. In a recent round of bingeing on their catalog, it was John Lennon’s guitar playing that re-introduced itself. Paraphrasing Mr. Lennon himself, if George was The Beatles’ forgotten singer, John was their forgotten guitar player. And while at this point virtually nothing the band did can be considered overlooked, Lennon had a point.  For example:

He was a monster rhythm guitarist. He totally drove the band, particularly in the early days.

Listen to his wildly inventive contributions on early gems like “All My Loving” and “I’m Happy Just to Dance with You.” If you yourself play guitar, just try copying what he did. Not so easy. More to the point, he came up with this stuff – crafting innovative parts that not only served the songs but propelled them.

Later, he added raw power and avant-garde touches to tracks like Revolution and the 3-guitar volley on Abbey Road’s “The End.” His sweet fills on tunes like “Get Back” gave them their personality. His delicate fingerpicking on “Julia” showcased his fine touch on acoustic guitar. It’s obviously no secret that all four guys were sharp, road-tested, ceaselessly clever musicians. It’s worth an extra “cheers” to John Lennon for his understated, yet exceptionally versatile talents on guitar.