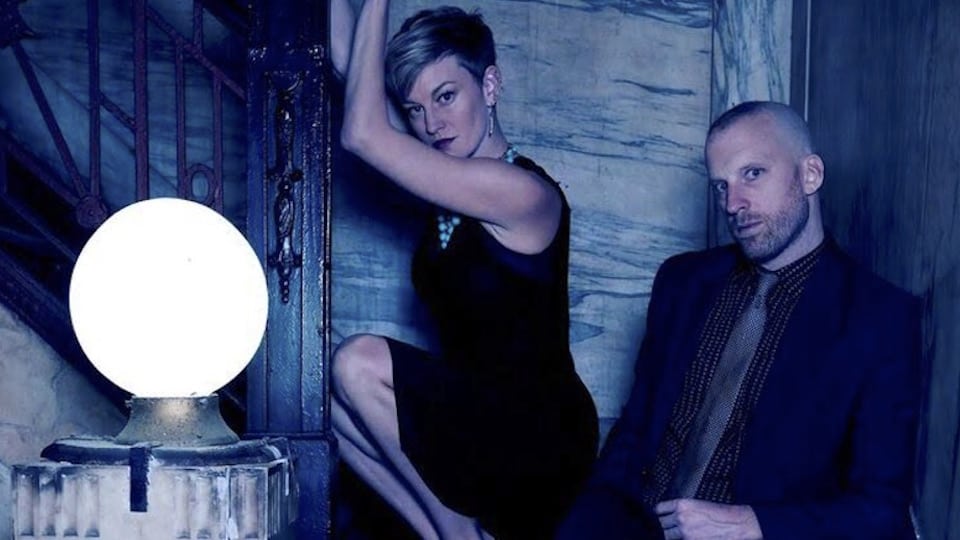 “It started with a suitcase discarded on a sidewalk…” Specifically, a cloth-covered suitcase on a NYC sidewalk containing the diary of a young woman named Francis. The decades-old journal entries—expressing one woman’s desires and fears—inspired London Plane’s principal songwriter David Mosey to write the songs on their debut, New York Howl. I sat down with David and lead singer Cici James to talk about Francis and other influences that haunt their spaciously epic songs. Along the way, I encountered two thoughtful artists, who aren’t too busy being serious to laugh and occasionally throw back a tequila. Why not?

CultureSonar: How did London Plane come together?

David Mosey: Well, we met backstage at a Lou Reed Loser’s Lounge tribute show (Feb. 2014). We were both singing in it. I was working on material for London Plane, but had just come to the realization that I shouldn’t be singing the songs, so…

Cici James: You wanted a girl.

DM: I thought, “How am I ever going to find a girl to do this stuff?” Then I saw Cici and asked her if she wanted to do it and without even knowing what I was talking about she said “Yeah.” I was writing with Ronnie Spector in mind and the voice in the diary that New York Howl is based on. So, it just didn’t make sense for me to sing words like (from “Hearts”) “I’ll draw hearts around our names.”

CS: Let’s talk about the album. I haven’t memorized all the lyrics yet, but…

CJ: Neither have I.

CS: It doesn’t seem like a concept album that’s just about the diary. Is it safe to say those were merely a springboard to voice something you felt when you moved to New York City?

DM: Yeah, for sure. I identified with it immediately. It’s a very loose interpretation of [Francis’] diary, but the main themes are all there: a banishment of fear and isolation. All the songs have a resolution in and of themselves. So, it’s definitely not a concept album. It’s kind of a similar story told ten times.

CS: Is it important for you to have a through line now on all your albums?

DM: On the new album, which hopefully will come out next year, there’s a song about Padre Pio, an Italian priest who had the Stigmata. It’s my favorite song of the set. So far, [the new album] is becoming a collection of songs about people who live on the periphery of science and culture. But that’s definitely not on purpose.

Q: And these characters, these songs, never feel false for you to inhabit?

Cici: There’s not yet been a song where I feel like, “Hmm, this doesn’t feel like me.”

CS: You mentioned Bowie and Ronnie Spector. Siouxsie and the Banshees, and Echo & the Bunnymen are also influences. Who are some others that might surprise people?

CJ: A reviewer once said I reminded him of Liza Minnelli. I’m not sure that’s part of our sound, but I was happy about it (laughs). I think I have a Debbie Harry stage presence, but I don’t think our voices sound alike. If anything, our music more often sounds like Bauhaus.

DM: This week I’ve been listening to [19th Century Austrian composer] Bruckner and I like the sadness of Antony and the Johnsons.

CS: As the primary songwriter, David, do you come with fully-formed ideas, or do you bounce them off other band members.

DM: For New York Howl I wrote all the songs with an acoustic guitar. For the next album, we’ve been doing what we call “Tequila 20.” We start the rehearsal with 20 minutes of drinking tequila and I play about 10 seconds of a song I like and the bass player and drummer come up with something. I’ll start humming lyrics, Cici will start singing and Kristofer (lead guitarist) will start playing and it will become a completely different song — one that’s haunted by that initial 20-second piece.

CS: Cici, you have a style that seems fairly well defined. Is that intentionally for this band or has that always been your look?

CJ: I wish I was more studied and thoughtful about it, but I generally just wear what I feel like wearing that day on stage.

At this point we laugh, noticing that Cici’s retro mod miniskirt and handbag match the yellow chair she’s sitting in.

DM: She’s sartorially lucky. She shows up and her f*cking purse and dress match the chair? It’s ridiculous!

0 comments on “A Page From the Diary of London Plane”