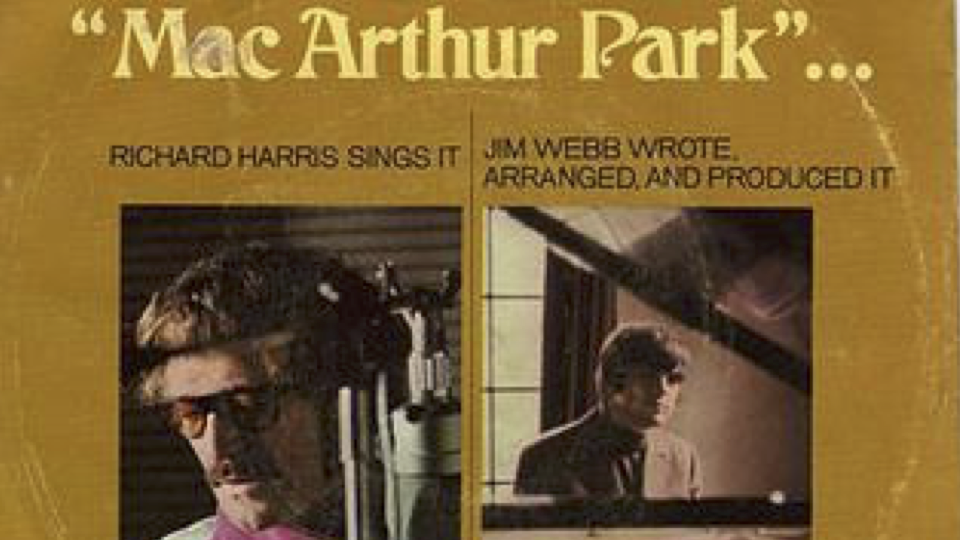 If Susan Horton is driving around and hears a DJ announce: “Now, we’re gonna play a block of songs written by Jimmy Webb,” she might shed a tear because the songs are literally the soundtrack of her life.  Webb noted that he wrote “By the Time I Get to Phoenix” about his break-up with Susan, his high school sweetheart.  “The Worst that Could Happen” was about her getting married to a fella not named Webb, and a tune that some think is the worst thing that could happen to music: “MacArthur Park.”

It has its share of detractors including humorist Dave Barry who called it the “worst song in modern history.”  But it has admirers including David Letterman who devoted an entire Late Show to this cinematic song, complete with a 23-piece orchestra and Webb playing the harpsichord.

There are something like 187 artists who have covered it, including MC5’s guitarist Wayne Kramer, Frank Sinatra, the Four Tops, four versions by Waylon Jennings, Weird Al’s parody “Jurassic Park” and Donna Summer’s disco-ized take which took the song to #1 in 1978.

But long before a cake with green icing was baked, the song’s initial ingredients were suggested to Jimmy by producer Bones Howe, who prodded Webb to write a hit that had a smorgasbord of styles: classical, shifting tempos, and an orchestra meshing with the usual four-piece rock ensemble of guitar, bass, drums, and keyboards.

Jimmy was up to the task and even considered making the song play for 22 minutes.  Bones presented the tune to The Association only for them to turn it down.  At an anti-war fundraiser in LA, Webb met a future drinking buddy in the actor Richard Harris.  Webb recalled Harris slurring:

“‘Let’s make a record, Jimmy Webb.’ He only called me ‘Jimmy Webb,’ never just Jimmy.  A few weeks later, I received a telegram: ‘Dear Jimmy Webb.  Come to London.  Make this record.  Love, Richard.’  I got a flight and stayed with Richard in Belgravia, London. Over the course of two days, we tore through 30 or 40 of my songs.  I was playing the piano and singing as we drank pitchers of Pimm’s Cup.  He was standing there in his kaftan, waving his arms and expressing excitement at some songs, not so crazy about others.  The best went into his debut album, A Tramp Shining.  ‘MacArthur Park’ was at the bottom of my pile.  By the time I played it, we had moved on to straight brandy, but Richard slapped the piano and said, ‘Oh Jimmy Webb. I love that!  I’ll make a hit out of that, I will.’”

And a hit it was, soaring to #2 in America in 1968 despite clocking in at 7:21; a gift for DJs who needed a bathroom and/or smoke break and an aural gift to the Beatles.  Their producer, George Martin, told Webb that the song’s length caught the group’s attention and was the reason behind “Hey Jude” hitting the seven-minute mark at 7:11.

But it’s the package of melody and words that causes fingers to snap and thoughts of “What a song!!”  In “MacArthur Park’s” case, its words have caused thoughts of “What is this song??”  This could be due to Harris’ over-the-top singing and some lyrics that induce eyerolls.

Somehow, it all successfully blends as well as one of Harris’ favorite drinks: black velvets (champagne and Guinness).  Webb has cited that the pieces of the song are drawn from his time with Horton in LA’s MacArthur Park.

“There’s nothing in it that’s fabricated. The old men playing checkers by the trees, the cake that was left out in the rain, all of the things that are talked about in the song are things I actually saw.”

But Webb has also acknowledged that he recalled reading the poet W.H. Auden’s comment on his well-lined face as his friends celebrated his 60th birthday: “My face looks like a wedding cake left out in the rain.”

Auden most likely laughed it off but Susan Horton wasn’t chuckling in 2013, when during an interview with the LA Times, her eyes filled with tears upon hearing Harris warble, “After all the loves of my life, you’ll still be the one” and remembering that she and Jimmy slowly came to the realization that neither was “the one.”

As Jimmy recalls: “When I came into some significant money, I hired a Lear jet, flew up there [to her home in Lake Tahoe], and said: ‘I’m not going back without you.’ We lived together for three years. Then it turned into a soap opera.”

But Susan, who went on to marry Linda Ronstadt’s cousin, Bobby, will always have this pop-operatic song to remind her of her relatively short time with Jimmy.  She admitted during the interview while sitting next to her husband: “I mean no disrespect to anyone but I have to say, I have loved Jimmy for 50 years and I always will.”

After her husband heard her say this, one wonders if he told her that their wedding day was the very worst that could happen…to him.

4 comments on ““MacArthur Park”: The Greatest or The Worst Song Ever?”