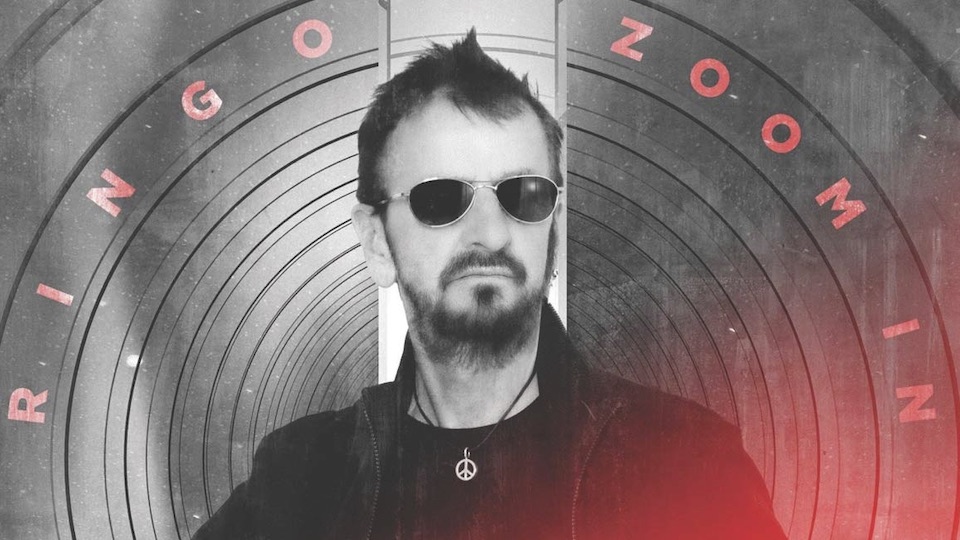 With Zoom In, Ringo Starr is fulfilling his promise to scale back on his album output, and to put greater focus on the single, the song, and the E.P. The drummer is the first to admit that his songcraft has been spotty at best, and to release an album so soon after the era-defining McCartney III would be throwing himself on the train tracks that his beloved “Thomas” would soon run over. And why should he write an album, when he sounds so vital over a splendid five-song set?

Zoom In is a tidy get-together of musicians, everyone eager to prop the Beatle knighted far too late in his sixty-something year career. As early as 1973, Starr made a habit of inviting friends around to play on his projects. The resulting album, Ringo, remains his most beloved and proved to be the closest thing to a Beatle reunion during John Lennon’s lifetime. By the time The Beatles congregated for The Anthology Project, Lennon had been dead for fifteen years, and only through Jeff Lynne’s sonic ingenuity could the guitarist join his outfit for one final hurrah.

Fast forward to 2021, and George Harrison is also gone, but rather than dwell on the negative, McCartney joins his old comrade for a good ol’ singalong on the jaunty “Here’s To The Nights.” Joining in a choir that includes such luminaries as Sheryl Crow, Joe Walsh, and Dave Grohl, McCartney pips in to support Starr on a festive chorus that is likely to make New Year playlists across the world in years to come. It doesn’t take a lie detector test to recognize that the song is aimed at some of their fallen comrades, but true to form, McCartney and Starr opt for the positive by inviting their artistic peers (and successors) to party with them.

Cautious to abide by Covid regulations, Starr invited only a select few to work with him in the studio; the rest, including McCartney, were recorded over Zoom. What’s more remarkable isn’t the manner by which he captured the feeling, but the buoyancy he caught from songwriters all over the globe. “Zoom In Zoom Out,”  the closest thing here to a seventies rocker, is given new life by Robbie Krieger’s crisp guitar performance.

“Not Enough Love In the World” shoots off with infectious energy, from the power of Joseph Williams’ jaunty arrangements, and hats off to the drummer himself on “Waiting For The Tide To Turn.” Starr presents a detailed display of percussive beauty that pivots listeners away from his more traditional rock-steady style to reggae-infused drum-licks typically favored by Stewart Copeland. Toto’s Steve Lukather steadies the beat with his choppy trademark guitar patterns, while Benmont Tench (best known for his work with Tom Petty) handles many of the more ornate flourishes from the confines of his piano.

The EP’s most successful track is “Teach Me To Tango”, a guitar-heavy number with Zelma Davis on backing vocals, typifies the work with a confectionary-covered chorus, and the production– crisp as it is– showcases every instrument with near-perfect pristine polish. To tell you the truth the track wouldn’t sound out of place on a Wings album, and the lines that brought McCartney and Starr on their first recording session in 1962 have been drawing nearer and nearer in more recent decades.

There will come a day when none of The Beatles will sing for us, and each of us will have to remember them for their creativity, candor, and cheerfulness in their stead. With Zoom In, Starr has delivered that, and more.

1 comment on “Ringo “Zooms” In On His Latest EP”