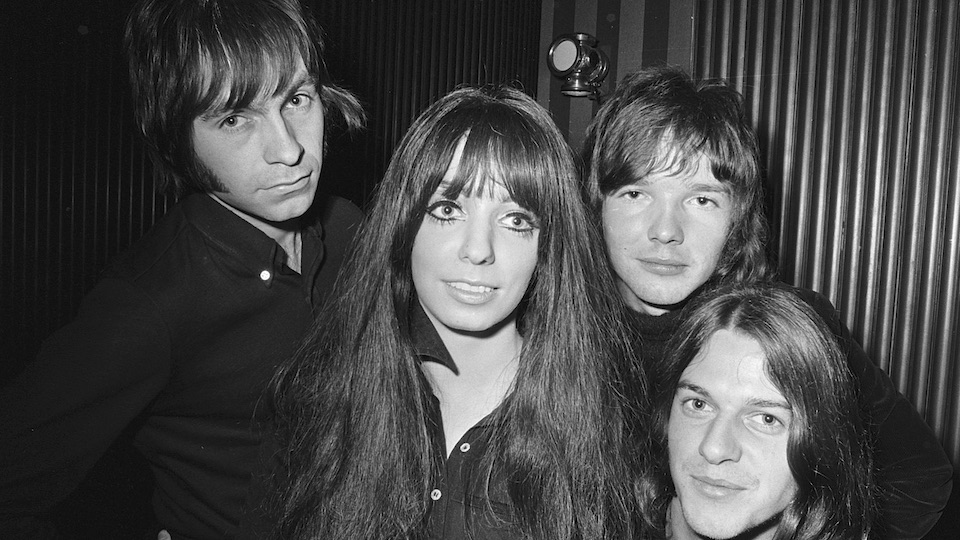 The cliché image of Holland is that of a pristine place filled with giant beds of tulips. But Holland was once a hotbed of dirty “parkeergarage rock en roll” (garage rock and roll) with a batch of bands sounding as if they were in the studio as the Stones recorded their first album, taking notes on what made a song sound raw and raucous.

Some Dutch groups learned well from these masters of rock.  Bassist Peter Vink of Q-65 said of their singer Willem Bieler: “He absolutely loves Mick Jagger.  His voice and his personality, everything about Mick is the end.  He sees a photo in which Jagger carries his bag in front of him in a funny way and then Willem carries such a bag in front of him, too.”

Q-65 even took their name from the Stones’ versions of “Susie Q” and “Route 66.”  Why they didn’t use 66 instead of 65 in their name could be attributed to their state of (stoned) mind reflected in their song, “Summer Thoughts in a Field of Weed.”

Q-65 had buckets of talent but not a drop of luck.  Their drummer, Jay Baar, was imprisoned on drug charges and Bieler was drafted into the army.  It didn’t help their commercial cause that violence was a part of their concerts.  As their guitarist, Joop Roelofs recalled: “There was always lots of violence in the public wherever we performed and it gave us a bad name and less work.  Nobody had the guts to book us.”

But like other “Nederbeat” bands of their era, their songs were confined mainly to their homeland.  This meant that the Outsiders’ super-catchy “Sun’s Going Down,” which virtually screamed “SMASH HIT!!!” may have been a reason why Kurt Cobain unsuccessfully tried to meet singer Wally Tax in Amsterdam.

The Selfkick band also wound up being a big-fish-in-a-small pond group which is a shame because if eardrums had taste buds, then their fantastic, frenetic “Gosh, I’m your Woman Not your Wife” would act as a can of Red Bull mixed with a cup of espresso.

Mike Stax, who wrote the liner notes for the eight CD set, Dutch Beat Nuggets, explained why Dutch bands couldn’t aurally break out of their homeland:

“The main disadvantage is that the market was already saturated with successful bands from the UK and the USA.  It would have been extremely difficult for a band from Holland to compete in that forum.”

This sound barrier was arguably broken by one Jerry Ross—and two jukeboxes.  Ross, who was working in distribution for Heritage Records in 1970, said: “My wife and I went with my sales manager, Hal Charm, to spend a couple of weeks in Europe to set up distribution.  We went to Amsterdam and our distributors took us out to lunch at this fancy chrome and leather U.S.-style diner.  The jukebox is playing a lot of R&B stuff.  Then this record comes on, with a charismatic guitar riff interlude.  I call the manager of the diner over and ask him, ‘What is this?  It’s a great record!’  He said they were a local group from Amsterdam called Shocking Blue and the name of the song is ‘Venus.’  So we met with and signed the artists and secured the rights for their music for North America.  And the next day, the same thing happened in Hamburg.  I heard another song I liked playing on the jukebox.  It turns out to be the Tee Set and ‘Ma Belle Amie,’ so we fly back to Amsterdam and sign them as well!  We get back to the States and start a new label, Colossus Records, named after our miniature poodle.  The first record we release is ‘Venus,’ which is an instant smash (#1 in America for three weeks in 1970), followed by ‘Ma Belle Amie’ (which reached #5 in America in 1970).  Then I heard and discovered ‘Little Green Bag’ (used in Tarantino’s Reservoir Dogs) by the George Baker Selection.”

Unfortunately, these bands’ international success was short-lived; although Cobain, who seemed to have a hankering for Dutch-made music, recorded Shocking Blue’s “Love Buzz.”

After Focus’ bizarrely wonderful “Hocus Pocus” had left the charts in 1973, another Dutch band entered in 1974—and more than once: Golden Earring, or as they used to be called, “Golden Earrings.”  They not only dropped a letter in their name but they skillfully dropped Brenda Lee’s name in their majestic smash “Radar Love.”

After scoring a hit in 1982 with “Twilight Zone,” two years later, the “Earring-ettes” served up “When the Lady Smiles” and its mind-blowing video that was not to MTV’s liking.  The network banned the video in 1984 and would ban it today.  The banishment actually did the band a favor as the video features a series of career suicide scenes.  These include singer Barry Hay ripping half of the clothes off of a nun on a subway train, then paying for his many misdeeds by getting a blood spurting lobotomy on a hospital’s gurney as scantily clad nurses dance around him. Hay’s surgeon then tosses a piece of the singer’s brain to a dog who chews it up–as critics would have done to the band.

For years, Dutch names weren’t much of a presence on America’s charts until two sons of a Netherlands native named Jan and an Indonesian mother named Eugenia grew to adulthood: Alex and Eddie Van Halen.

5 comments on “Rockin’ The Tulips: Revisiting The Dutch Invasion”