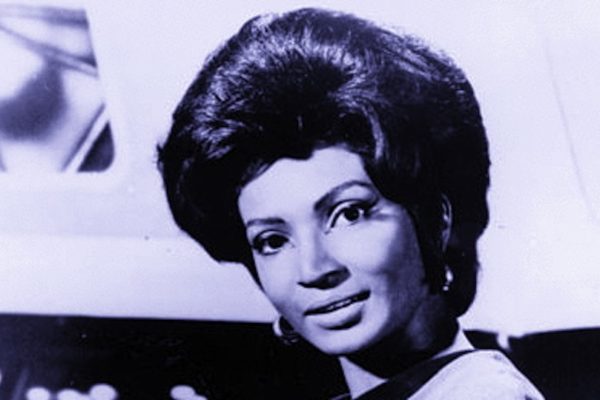 Editor’s Note: This post, originally published on 10/10/16, is one of our “Greatest Hits.” Bringing it back now seems a good way to honor the formidable Nichelle Nichols.

While Hollywood continues to grapple with gender equity, no genre seems more primed to help steer the conversation in the right direction than sci-fi where women are regularly flourishing of late.  For obvious reason, science fiction has consistently been a forward-thinking format, starting with groundbreaker Nichelle Nichols who first hailed all frequencies as Lt. Uhura on Star Trek in the ‘60s. If the current crop of women-centric projects set in outer space and/or some parallel universe (that may or may not be ours years from now) is any indication, perhaps the future may just be female after all. Beam us up for these female-led films…

Pulp Heroines
Two bleak, dystopian sci-fi films offer a vision of women going from powerless to powerful. The stylish 2005 flick, V for Vendetta sees leading lady Evey (Natalie Portman) go from fearful, mild-mannered journalist in a not-so-distant totalitarian Britain to fearless rebel leading the revolution.  Similarly, The Hunger Games trilogy features teenager Katniss Everdeen (Jennifer Lawrence) literally battling for her life in a dystopian ceremony before becoming the ultimate freedom fighter. Classic class-conscious sci-fi often gives women the freedom both to highlight how crucial they are to achieving a more utopian society and to subvert stereotypical ideas about femininity in an entertaining and thought-provoking way.

Art Warriors
And speaking of subverting femininity, three great examples of empowered women eschewing traditional gender roles in sci-fi spring to mind almost immediately: Ellen Ripley (Sigourney Weaver) of the Alien franchise, Sarah Connor (Linda Hamilton) in Terminator 2: Judgment Day, and Furiosa (Charlize Theron) of Mad Max Fury Road.   All three start off their journeys hunted by brutal creatures (alien and/or male) before undergoing drastic changes to become militaristic warriors. These are women of action who retain emotional depth thereby challenging Hollywood’s and the public’s preconceived notions that women must be either feminine or not.  Ripley, Sarah, and Furiosa all have deep maternal instincts: Ripley for orphan Newt (Carrie Henn), Sarah for son John (Edward Furlong), and Furiosa for escaping sex slaves.  While all rely heavily on intelligence and derring-do to save the day, their ability to feel intense emotions then channel that intensity into tactical actions sets them apart from their male counterparts.

Sisters of Science
And what about independent female scientists who are more brains than brawn?  While we wait to see Amy Adams’ linguist Dr. Louise Banks communicate with extraterrestrials in the buzzy film Arrival, three other fine female scientists already deserve your eyes and ears.  In the 1997 film Contact, Dr. Ellie Arroway (Jodie Foster) ponders questions of faith, science, and otherworldly life while defending her work/beliefs to skeptical male politicians and scientists.  Similarly, Interstellar’s Murphy “Murph” Cooper (Jessica Chastain) and Dr. Amelia Brand (Anne Hathaway) devote their lives to finding solutions to ensure humanity’s survival amidst almost insurmountable odds.  As for marooned Dr. Ryan Stone (Sandra Bullock) in the visually stunning Gravity, she must rely on her training, smarts, and sheer willpower to make her way back to Earth as she works through one crisis after another.  These are women whose defining traits are their wits and determination; they’re all self- reliant to an extreme because while they show an ability work alongside men as equals, they ultimately have to go it alone.

Princess Leia’s Progeny
Of course, 2015’s highest grossing film (and the third highest grossing of all time), Star Wars: the Force Awakens, features another young woman going it alone for most of her life: spunky orphan Rey (Daisy Ridley).  Here again, we see stereotypical gender roles flipped as Rey is tough and resourceful while male counterpart, Finn (John Boyega), is often the one in need of rescuing or assistance.  While we don’t yet know who her parents are, Rey certainly owes a great debt to the original Star Wars trilogy’s Leia (Carrie Fisher), who started her career as a Senator, became a leader of the Rebellion, and never let men—including beloved Han Solo (Harrison Ford)—walk all over her.  Leia, like Rey, doesn’t mind getting her hands dirty and is more than capable of fending for herself.

Enterprising Lady
Which brings us back to Nichols’ groundbreaking Lt. Uhura, who also injected a much-needed jolt of female energy into an otherwise male-heavy franchise.  Uhura was capable, smart, and had a prominent job within the Enterprise where her race and gender were mere footnotes in Gene Roddenberry’s optimistic vision of the future.  “If she can see it, she can be it,” is the motto for the Geena Davis Institute for Gender in Media, a research-based organization founded by Academy Award-winning actor-turned-activist, Geena Davis.  “In the time it takes to make a movie or create a television show, we can change what the future looks like,” wrote Davis in a guest column for The Hollywood Reporter, “How do we encourage girls to pursue science, technology, and engineering careers? By casting droves of women in STEM jobs today in movies and on TV.”  Thanks to Uhura and all the strong, smart women who’ve followed her on screens large and small, hopefully, little girls will see a “final frontier” worth exploring.