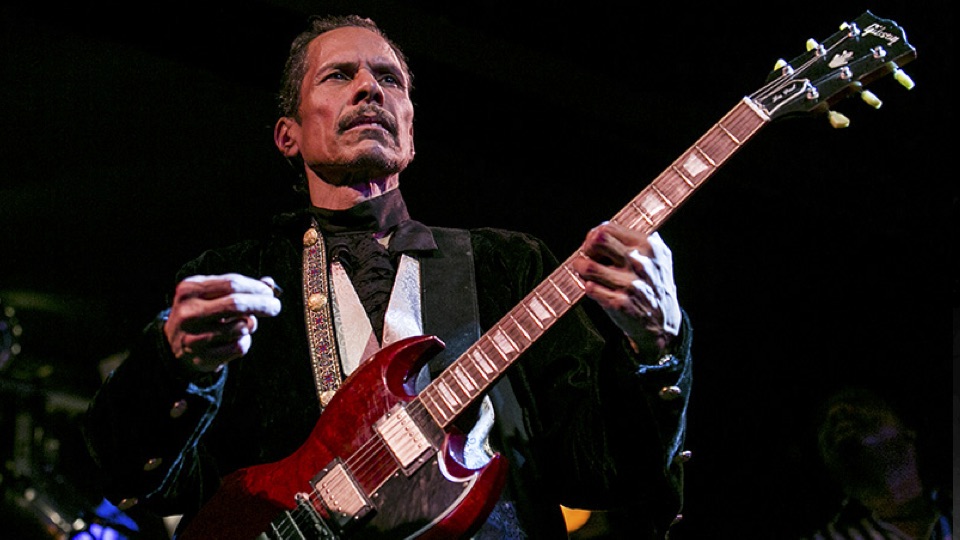 High-powered rock groups are like well-oiled machines.  Sadly, some machines and groups fall apart when a key component drops out; others simply replace one part for another.

Such was the case when guitarist Mick Taylor left the Stones on December 12, 1974. His departure was an early Christmas present for producer/engineer Glyn Johns who called him “a raving egomaniac junkie.”

After Mick’s departure, a guitar “Star Search” was on, with Jagger and Richards even wanting to hire Jeff Beck (who turned them down).  Jeff mused, “Some people might find it hard to believe that you’d walk away from the Stones gig, but Keith and I wouldn’t have gone through an album without punching each other out anyway.”

Then there was Shuggie Otis. His name doesn’t ring many bells these days, but the then 20-year-old guitarist landed a Stones audition.  Shuggie recalls, “So I got a call from Amsterdam and it was Billy Preston.  He was a mutual friend of me and the Stones.  He said, ‘Hey, man, I’m sitting here with the Stones right now and they want you to join the group.’  I didn’t think twice.  I didn’t say no, like, ‘Are you kidding me?’ But I was into a whole bunch of stuff.  I told him I had my own group and I was doing my own thing. I didn’t want to be with the Rolling Stones.”

Yes, to the chagrin of the Stones and other bands (Spirit, Buddy Miles, and Blood, Sweat and Tears) and a man (David Bowie) who wished to hire the guitar-slinger, Shuggie just said no; believing:

Before he was Shuggie (a name his mother gave him which was short for “Sugar”), he was Johnny Alexander Veliotes, Jr., son of Ioannis Alexandres Veliotes.  Mr. Veliotes, Sr. was much better known as Johnny Otis, singer of the still infectious “Willie and the Hand Jive,” a 1958 ditty that peaked at number nine on the charts.

Growing up, Shuggie literally learned at the feet of some great guitarists which included Jimmy Nolen.  Nolen’s “chicken scratch” plucking got him a five-year gig in James Brown’s band and was a vital part of the sound that made “Papas Got a Brand New Bag” and “I Got You (I Feel Good)” so remarkable and danceable.

As a 12-year-old, Shuggie must’ve found it hard to relate to his junior high classmates.  He spent his days at a studio playing behind his favorite musicians which included Louis Jordan, T-Bone Walker, and Big Joe Turner.  Three years later, the 15-year-old prodigy was accompanying Al Kooper on Al’s Kooper Session album and playing bass on Frank Zappa’s Hot Rats LP.  The wunderkind was like a one-man Hanson band and could play just as many instruments (guitar, bass, organ, piano, and drums) as the three youngsters combined.  And like the Hanson’s, Shuggie wound up writing one smash hit (“Strawberry Letter 23”) in his teens, but none as an adult.

Like “American Pie” is to Don McLean, “Strawberry” is one sublime song that after over 44 years and counting, keeps on giving revenue to the writer, causing Shuggie to joke that it has “kept me alive all these years.”

Its ear-candy melody was lifted, among many others, by Beyoncé on her “Be With You” song, while its much more famous rendition by the Brothers Johnson landed on the soundtracks of Quentin Tarantino’s Jackie Brown and Pulp Fiction films.

But while the tune seems likely to have a never-ending aural life, Shuggie’s career died a slow death; which left him without a record contract at the age of 21 and left him possibly later questioning himself: “Why didn’t I join the Stones?  And why didn’t I let Quincy Jones produce an album for me?”

“He wanted to have control of the music and I did not like that at all.  He was also going to pull out all the stops and try and make me a star and that was scary too as it wouldn’t be on my own terms with my own music, it would be with Quincy Jones calling the shots.”

To his credit, Shuggie always controlled his music but became out of control; admitting of his long-time battles with drugs and alcohol.“Oh, I tried everything when I was a kid.  And I was drinking for 30 years straight.  I used to have it for breakfast.  When I wasn’t working, I’d just stay home and drink.”

But Shuggie physically and mentally pulled himself together and remains his own man.  When asked in 2020 if he had joined the Stones, would he “even had made it to now,” Shuggie asked back, “There’s the thing.  When you think about what would have happened to the body—or your mind—where would you be?”