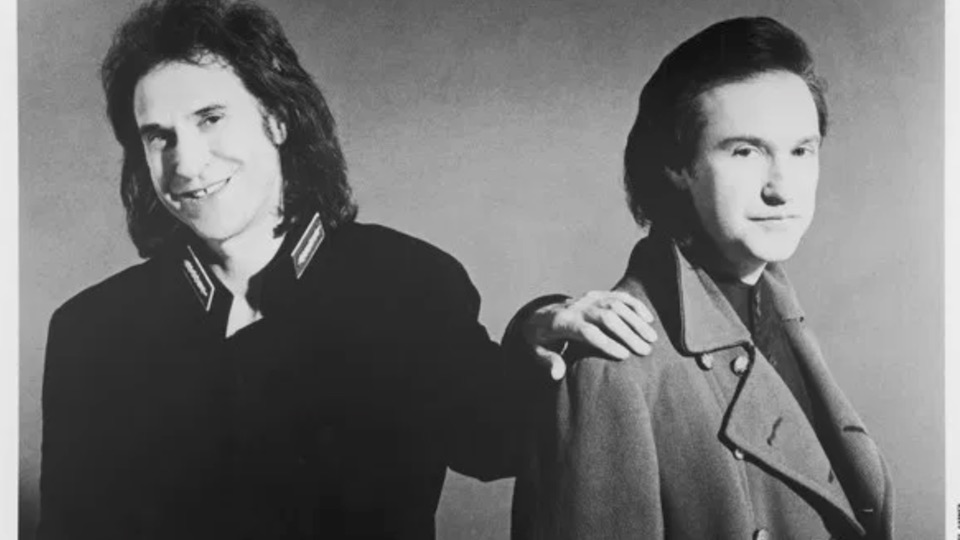 I’ve been thinking of all the loving married couples that have created Rock & Roll music together. Alas, there was not enough to make for interesting reading. I came up with some notable exceptions- The McCartneys, John & Yoko, Richard & Linda Thompson, Patti and Fred Smith, Pat Benatar with hubby Neil Giraldo and the McVies of Fleetwood fame. But then the list gets thin (who else, Sonny & Cher?). I guess loving marriage and great R&R do not always mix. The music is grounded in the singles game.

That compelled me to flip the channel to “brotherly love” and that notion provided a richer history. Brothers collaborating and making great music seems like a more natural process. In some cases, brotherly love is the foundation of building exciting and creative R&R…. and sometimes they end up hating each other. Here are the top fourteen brother combos of Rock:

While US ears of the late 70s hardly heard of them, Split Enz vocalist Neil and guitarist Tim Finn served as the founding members of the moderately successful New Zealand band that disbanded circa 1984. The brothers went on to release a couple of duet albums as The Finns. Soon after, Tim immigrated to England, leaving Neil (vocals, guitar, and keys) to form a new band, Crowded House. Upon gaining some success, he eventually reached-back to brother Tim to join the band, especially after their worldwide single achievement “Don’t Dream it’s Over” reached #2 in the US in April of 1987.

Blue Oyster Cult enjoyed the musical skills of Watertown, New York’s Albert (drums), and Joe (bass) Bouchard that led to the band being known in their heyday (1973-1983) as “the thinking man’s heavy metal band.” Both Albert and Joe sang and contributed to the songwriting duties that were shared by all 5 founding BOC members. Albert was a force to be reckoned with as a leader in the band’s musical direction, and at times, he served as the group’s enigma. He left the band twice.

In another hard-rock rhythm combo, the twin brothers Panozzo brought the needed firm foundation for the complex and spacious writings of Dennis DeYoung to Styx (witness: the marching rhythms of 1977’s “Fooling Yourself”). Chuck on bass was active in the band up to 1999 when he was sidelined due to health problems related to his battle with HIV/AIDS. While John (on drums) experienced a long struggle with alcohol dependency, finally succumbing to cirrhosis of the liver in July of 1996. He was just 47 years old.

The elder Chris took the dominance of attention for the band, being the lead singer and spokesman for the group. Although his mouth sometimes got them in trouble, Chris surely can sing and has an authentic depth to his soul delivery. Rich was generally in the background writing great stuff for the band (i.e.- “She Talks to Angels”). They did not always get along (nor did the greater band). Lots of solo projects emerged under three distinct eras of break-ups/reunions throughout their 30+ years of history. But to our surprise in 2019, the Robinsons went on the Howard Stern Show to tell the world all business was patched-up, and the band would be touring again in 2020…. well, maybe after COVID.

Born in Scotland, then growing up in the Newcastle area, elder brother Mark graduated with a degree in English from the University of Leeds and worked three years as a college lecturer while playing music with several bands in the evenings. Eventually, he reached out to brother Dave and formed the nucleus of Dire Straits. After two moderate selling albums, David felt the stress of the growing demands of the music business and left the band. Their next album, Making Movies, released in 1980, would see the band skyrocket to fame and fortune. David went on to record over 15 low-key solo albums but is reported to be happy with his lot in life.

Some would argue that the close-knit brothers Gibb were not rockers, but their early work stands right up there with 60s contemporaries like the Moody Blues and Hollies. It was only when they were smart enough to see the tsunami of disco that was coming in the mid-70s that they took their songs like “Staying Alive” with its rock riff, and fixed a heavy down beat to it. The song sold millions. Nevertheless, they were hugely talented young men in matching white suits, who could pull off air-tight, three-part harmony. By the late ’70s they were the biggest band in the world…and then (undeservingly) received the brunt of the “Disco Sucks” protest.

Growing up in Daytona Beach, Florida, it was Gregg who first picked up the guitar, but soon the elder Duane surpassed him with his playing abilities. Nevertheless, Duane’s desire to have his brother by his side was witnessed in his constant encouragement to Gregg to “Sing (your) guts out.” Back in July of 1971, a disappointed Duane took the moderate sales of the band’s first two studio albums and offered a live set to the public. At the Filmore East, became their commercial breakthrough. Duane would die shortly after that summer at age 24 (on October 29, 1971) in a motorcycle crash in Macon, Georgia. Following an impressive career, Gregg would leave us in May of 2017 at the age of 69 due to complications from liver cancer.

CCR was not “Born on the Bayou.” Tom and his younger brother John were from Berkeley, California. This is where both started separate bands in high school, with Tom eventually joining John’s band, The Golliwogs, in 1961. Tom soon found himself relegated to rhythm guitar and back-up singing for John, as his songwriting and strong vocals took over the sound and leadership of the band (Tom: “I could sing, but John had a sound!”). After changing their name to Creedence Clearwater Revival, John’s writing abilities had them rolling with “Proud Mary” (# 2 in March 1969) and a string of other hits. Soon, John made the others know that as the writer for the band, his opinion counted over theirs. The resentments began to grow as Tom could not see John as anything more than his little brother and left the band in 1971. CCR would never hit the top 10 again. Tom Fogerty died in September of 1990.

There would be no Beatles sound or Simon & Garfunkel harmonies if there had not been Don (born in Brownie, Kentucky, 1935) and Phil (two years later in Chicago). The pair ended up intriguing Chet Atkins who introduced them to RCA Victor studios in Nashville. What followed was a string of hits in the late ’50s and early ’60s until they enlisted in the US Marine Corps Reserves in 1961. Often doing shows while on active duty, they appeared on stage in their military uniforms, seemingly linking them to the “establishment” of the ’60s. Their popularity soon dropped like a bomb over Hanoi. It was not until 1973 when the show-biz tough times and a spell of drug addiction officially separated them. The remaining years had the brothers inconsistently reuniting/separating for the rest of Phil’s life, which ended in January 2014, from lung disease.

Selling over 75 million albums worldwide, Oasis created the Brit-pop market of the 1990s that still reverberates today in the UK. Singer Noel and older brother Liam (the band’s songwriter) rode to the top with their debut album (1994) Definitely Maybe, and the only factor that stopped their trajectory was the constant fighting between them. Like the time when Liam hit Noel on the head with a tambourine while on stage. Like the time Noel hit Liam with a cricket bat. Like the time Liam claimed to have a “sore throat” before a show, forcing Noel to do the singing that night. Noel was understandably infuriated when he found Liam had enough lungs to heckle him during that very performance from the balcony! They parted ways circa 2009, openly stating that they do not have “any real relationship” anymore. But the world waits in anticipation: recent reports say Liam has invited Noel to his 2021 wedding.

The musical Young family immigrated to Australia out of Scotland in 1963, after one of the worst winters on record. Malcolm, (1955 – 2017) was happy to be the musical driving force contributing from the rear, giving his younger brother Angus the AC/DC spotlight. Angus reflected in 2020, “It was his creation, his idea, his whole thing. When I was younger and he said, ‘Me and you are going to play together’, I said, you’re kidding? Malcolm said, ‘No, you’ve got the goods!” He was right. Their sound was to be working-class guitars plugged directly into their working-class amps. No electronic gizmos or keyboards for them. Although Angus would have his place on several lists of hard rock’s best lead guitarist, it’s argued that Malcolm may have been the best hard-rhythm player of all time.

Their father wanted the brothers to be classical concert pianists. Alex wanted to be a guitar player and Eddie delivered newspapers to save-up for a drum kit. No one got what they wanted…except the listening public. Van Halen hit the world with their self-titled debut album in 1978. Hard rock was taking body blows between the popularity of disco along with something called “New Wave.” Doubling-down on every cliché that rock had to offer, Van Halen were loud, physical, hairy, overly sex-crazed, substance oriented, and brash (David Lee Roth: “The reason the critics don’t like us is that they all look like Elvis Costello!”). Of course, the star was Eddie, who reinvented rock guitar forever. All his success was fully supported by big brother Alex, one of the most underrated drummers of all time.

2) Ray and Dave Davies – The Kinks

Journalists have called them rock’s Cain and Abel. Juvenile and exacerbating, the shouting matches and fisticuffs between the pair just became part of the band’s legendary culture. Ray justified their conflicts as a positive element absorbed in their music. “Italy has had 3,000 years of wars, and also all the creativity – like Michelangelo!” he explained, “and Switzerland had 3,000 years of peace, never gets committed, and what has it produced? The Cuckoo Clock!” The history of their rivalry is not lost on the brothers. In a tongue-in-cheek duet recorded for their last album together (1993’s Phobia) called “Hatred,” they sing: “Hatred is the only thing that keeps us together, the only thing that lasts forever.” In 2020, Ray stated in the press that he would like to work with Dave again soon. May heaven help them!

The Beach Boys were a story of three brothers, a cousin, and their closest friend from the neighborhood inventing an entire music genre that would become “surf’ rock and roll. Their experimentation shook the world. On the other side, their early identity with the beach was a made-up love (we would call it “branding” today). Brian Wilson stated in his 2016 biography, “You wouldn’t think this, but I almost never went to the beach as a kid, even though it was a few miles away” (from their home in Hawthorne, California). But what was not fake was the love between the three brothers. Brian credits Carl for saving his life from his drift into substance abuse and phycological issues. Unfortunately, they could not save Dennis. At 39, he lived a vagabond life, drowning in 1983 at Marina Del Rey after drinking all day and diving off a boat. Carl passed in 1998 from lung cancer.

Honorable Mention: Pete and Simon Townshend, The Jacksons, and a special shout-out to sisters Ann and Nancy Wilson of Heart. Sorry, the Doobies were not actual brothers and I had no yearning to tackle The Osmonds, Hanson, or the Jonas Brothers.

6 comments on “Some Brotherly “Love””