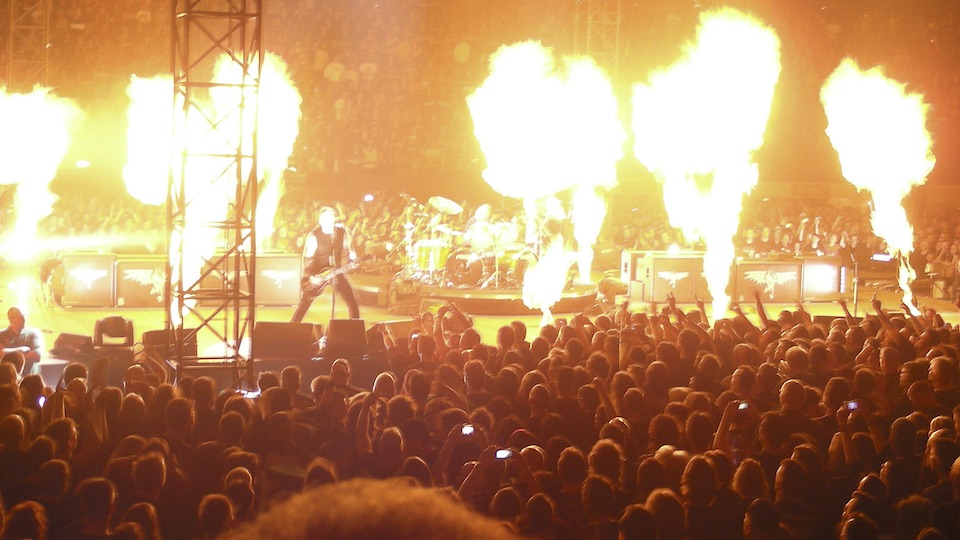 Whenever something is described as “The Devil’s” anything, you know there’s an interesting history behind this designation — and maybe some sketchy “facts.”  Everyone knows what the Devil’s Triangle is, just off the coast of Florida. Have you ever heard of “The Devil’s Highway,” also known as US Route 666 (technically the 6th spur off of US Route 66)? It has since been renumbered, so we’re all much safer now.  Or how about the tasty treat called a “Devil Dog”?  Surprisingly tasty, but not great calorically.  And then there’s the musical term the Devil’s Triad (or Interval or Tritone). It’s one of those things where the myth is much more interesting than the reality, but both are nonetheless intriguing and musically useful.

First some background.  A Tritone refers to three notes played together on any musical instrument.  Pick any starting note (let’s select ‘C’) using a piano keyboard.  Next, using just the white keys, count up two keys and two additional keys to create a triad (or trio) of notes played together, in this case, C-E-G.   The first, third, and fifth notes put together in this way sound very pleasing and resolute, forming a nice C-major chord.  It’s also called an independent tone because it resolves to something pleasant, and there’s no expectation that it will be followed by another chord. For example, consider the last chord played in The Beatles’ “A Day in the Life”, which is an E-major chord. Now, if we change some of these notes we can instead make the chord dissonant, or one that leaves you hanging and makes you feel as if the progression has not concluded.

Going back to our C-major chord example, drop the G a half step to the black key on a keyboard that corresponds to a G-flat (Gb), and what you’ll hear is something very dissonant – something that doesn’t sit well with your senses and that suggests another chord is required for proper resolution.  The chord can then be referred to as a “flattened 5th” in that you’ve taken the 5th note of the chord (the G) and brought it down one half a step to a Gb (also called an augmented fourth, in that Gb is the same tone as an F#, which is four notes from the root C note).  Still, following?  In short, it’s an odd-sounding tone.

The mythos around this dissonant flattened fifth sound suggests that in medieval times when a lot of popular music was often only heard while in church, some religious leaders preferred to avoid such dissonant sounds in their popular music, which might cause churchgoers to quietly stand up and file out with their ears covered.  Thus, the story goes that church leaders banned this sound and attached its famous devilish moniker.  While the banning is not literally true, it’s certainly possible that songs that contained such otherworldly tones were likely considered provocative and not used much both in the music and as part of the various chants that occurred around the same time.  Most literally, in 1323 Pope John XXII railed against some of the modern music that kids were being drawn to back then (and that was infiltrating religious music) which contained two or more complex melodies.  Historically, most chants were of the Gregorian style, which usually included just one melody.  That’s the closest any ban would be put in place.

The name attached to this discordant tritone was the Latin phrase Diabolus in Musica, which most likely referred to both the dissonant sound and how difficult it was to harmonize to it.  You see, during this same time creators of various religious chants also experimented with singing both a melody and then overlaying a harmony.  Going back to our C-major chord example, if the “lead” Gregorian is singing a C-note as part of a C-chord, the harmony would usually be another person singing an F (a perfect fourth) or a G (a perfect fifth).  Relatively straightforward and it sounds great.  But with a flattened-fifth note (Gb) in the chord, how do you harmonize with that?  It’s not easy and often sounds very odd.  Thus, while Diabolis in Musica literally translates to the devil in the music, it also can be translated to diabolical music, meaning something very difficult to perform.  The notes are tricky and sound discomforting.  For a great example, check out the classic Camille Saint-Saëns’ Danse macabre.

The good news is that these flatted-fifth tritones survived to modern times and appear in a variety of both classic and contemporary music.  Black Sabbath used it for their eponymous song “Black Sabbath”, starting with the repeated three-note intro.

Many metal bands are drawn to the uncomfortable feeling that this flattened tritone creates, not to mention the convenient reference to the devil.  Hence, you’ll find this tritone in “Enter Sandman” (Metallica), “The Beautiful People” (Marilyn Manson), and “Bitter Peace” (Slayer), who even named their 1998 album Diabolus in Musica.  Diabolical!

Some non-metal arrangements that leverage a flatted-fifth progression include The Strokes’ “Juicebox,” Rush’s “YYZ,” Jimi Hendrix’s “Purple Haze,” and even “Maria” from West Side Story.

On television, the opening theme song notes on The Simpson’s, just after you hear the singers say “…the Simpson’s….” is a flatted fifth progression.  And Primus’ theme song for South Park uses the same technique.

So the next time you hear a song that has some discordant, even discomforting series of notes, odds are that they’re leveraging something that musicians have purposely used for many centuries – the flatted fifth, aka The Devil’s Tritone.  And while no one ever banned this technique, I’m sure it’s made a lot of people feel uncomfortable, challenged singers in terms of harmonies, and even led to headbanging.

1 comment on “The Real Story Behind “The Devil’s Tritone””