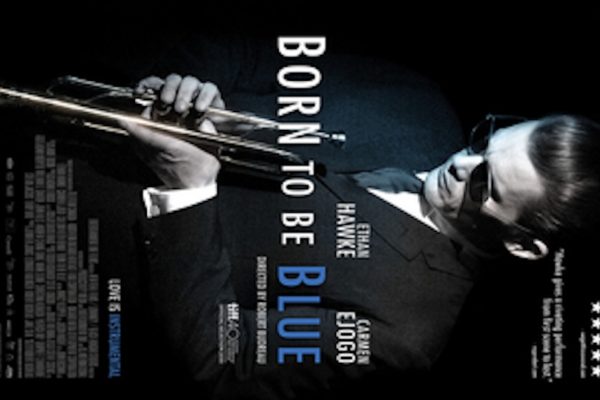 Trumpeter and jazz great, Chet Baker, has been called the “James Dean of Jazz,” presumably because of his good looks and bad boy image. Perhaps a more apt moniker would be the “Junkie of Jazz,” as he spent more years of his life high on heroin than not. [amazon template=left aligned image&asin=B00M0R86GQ]This dark insight is among many to be gleaned from a new biopic, Born to Be Blue, by Canadian director Robert Budreau. This highly fictionalized narrative, previewed to a select audience at the Jacob Burns Film Center in Pleasantville, NY, takes enormous liberties with fact, but is nonetheless anchored in real events. Instead of chronicling Baker’s rise from Oklahoma farm boy to LA jazz king, the film focuses on Baker’s struggle with heroin addiction and his subsequent musical comeback after a brutal beating in 1968 that left him with a broken jaw, missing teeth and a ruined embouchure.

Ethan Hawke (Boyhood, Before Sunset) stars in the title role and manages to engender empathy for this damaged character through his nuanced performance, perhaps the best of his career. The underlying current of the film is the friction between East Coast jazz, epitomized by Miles Davis’ modal innovation and note bending, and Baker’s more romantic and melancholy “cool jazz” style. A singer of torch songs and icon of West Coast Swing, Baker was viewed as a jazz arriviste by the gods of Birdland and spent much of his life trying to assert his relevance in the East Coast jazz scene. Kedar Brown portrays a stern and scowling Miles Davis, whose favor Baker relentlessly seeks. Carmen Ejogo (Selma) is wonderfully cast as his fictionally contrived, composite girlfriend, who serves as both muse to his music and foil to his drug use.

Budreau has an obvious affection for the jazz legend, as this is his second film on the subject. In 2009, he directed a short film, called The Deaths of Chet Baker, in which he explored the various scenarios that might have brought about Baker’s 1988 death from a fall out of an Amsterdam hotel window while high on heroin and cocaine.

In Born to Be Blue, Budreau creates an intimate and personal story wrapped in a visually striking period aesthetic. The film is mood-inducing, especially in the second half when more of Baker’s music is performed. Beautifully arranged by David Braid, the trumpet solos were masterfully played by Kevin Turcotte, who succeeds in persuading the audience – jazz aficionado and novice alike – to go home and immediately put on a Chet Baker album.

Photo Credit: Born to Be Blue poster (Fair Use)

Editor’s Note:  The wonderful Baker documentary, Let’s Get Lost , is a perfect appetizer before you see “Born to Be Blue.”

0 comments on “The Tortured Life of a Legendary Jazz Artist”