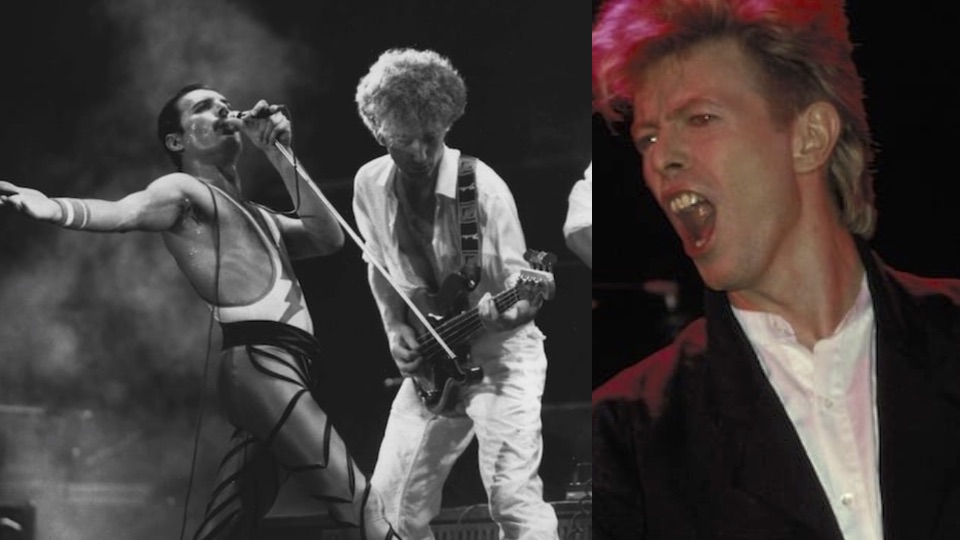 From the slick “Another One Bites The Dust” to the singalong glory of “We Will Rock You,” there’s no shortage of anthems in the Queen catalog. But what would count as their most sophisticated lyric? Considering the density of the work, “Under Pressure” likely ticks that box, not least because it shows genuine concern from the band to those less fortunate. It landed on Hot Space — the band’s underappreciated avenue into funk- -yet it’s unlikely that the band would have written something so potent if not for the presence of David Bowie.

To Brian May’s credit, he was happy to tip his hat at the songwriter, midway between Thin White Duke and eighties pinup. “It was hard because you had four very precocious boys and David, who was precocious enough for all of us,” May revealed in 2008. “David took over the song lyrically. Looking back, it’s a great song but it should have been mixed differently. Freddie and David had a fierce battle over that. It’s a significant song because of David and its lyrical content.”

Like many wonderful things in life, this collaboration stemmed from a happy encounter. In July 1981, Bowie was in Mountain Studios, Switzerland, just as Queen was working on their album. Bowie agreed to sing backing vocals for “Cool Cat” (ultimately erased from the final product), before agreeing to jam with the band. As it happens, they were working on Roger Taylor’s “Feel Like,” a punchy rocker that didn’t satisfy anyone. Yet it held some notable elements, not least May’s chiming guitar lick, that was recycled for the new track.

In the BBC documentary Queen: The Days of Our Lives, Taylor says that John Deacon composed the bass intro, before forgetting it over dinner. Luckily, the drummer remembered the hook, and Deacon opened the song with a lick that would arguably become his signature flourish.

From there, the two singers take over, and Freddie Mercury embarks on one of his more impressive falsetto performances. Countering the drama, Bowie creates a growling counterpoint, and the two voices bounce off one other to the clattering sound of cymbals and piano shuffles. The track has all the components necessary for rock immortality, but what gives the song greater depth are the words that emanate from the singers.

Nowhere is it more apparent than the bridge, which shifts gears, and slows the pace to more gospel-like territories:

“Turned away from it all like a blind man

Sat on a fence but it don’t work

Together, they realize that it’s love that keeps them going, and the song closes out on a more hopeful note. The song was a monster hit and effortlessly entered into the Billboard top thirty. Queen was quick to take ownership of the record, and it quickly emerged as a powerful stage favorite. Taylor took on the role of harmony vocalist, but Mercury dominated in the stage version.

Fittingly, Bowie reunited with the surviving Queen members at the 1992 tribute concert, but he acquiesced the falsettos to Annie Lennox. From that point on, Bowie would regularly perform the track, with bassist Gail Anne Dorsey tackling Mercury’s section.

It remains, by any measure of the word, a classic duet, and one that proved that rock could be intellectual as well as infectious.

2 comments on “When Bowie and Queen Were Under Pressure”