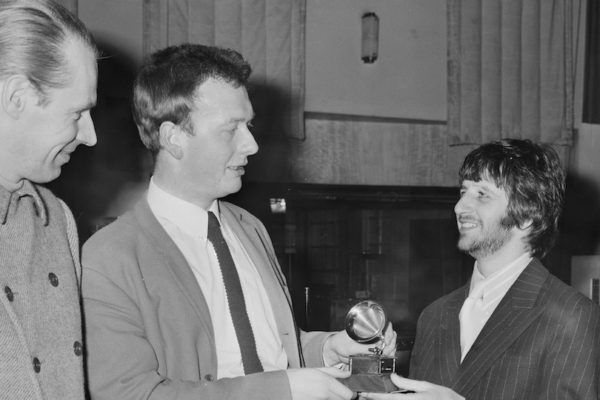 It was a slow song, in the style of a plaintive Roy Orbison ballad. The band started to record it; but the producer wasn’t feeling it. He advised the band to pick up the tempo, and to add a hooky instrumental bit at the beginning. Fortunately, the band listened to the grownup in the room. John Lennon grabbed his harmonica. Ringo kicked up the tempo. “Please Please Me,” The Beatles’ first #1 single (in the UK) was born – and a bond between the band and George Martin was forged. What would have happened if the lads insisted on doing it their way?

Not long before, when Martin was interviewing and critiquing the band – which had been rejected by pretty much every other record label – he asked, at the end of the meeting, if they had anything else to say. George Harrison (the quiet one?) chimed in: “Well, for a start, I don’t like your tie.” What if Martin were put off rather than won over by their “tremendous charisma”?

(He went on to say, “When you are with them, you are all the better for being with them and when they leave you feel a loss. I fell in love with them. It’s as simple as that.”)

By 1965, The Beatles’ were the biggest band in the world. EMI, Martin’s employer, was minting money; but it offered him only a small bonus. He then did something unprecedented, establishing his own production company to work not as a hired hand but an independent entrepreneur. The Beatles insisted he continue to produce their records, so EMI really had no choice. Martin effectively re-defined the producer’s role, and business model, there and then.

What if he didn’t roll those dice? He was, after all, a proper English gentleman – aware of his “place.” The 13 albums and 22 singles Martin produced with The Beatles add up to a little less than 10 hours of music. Where would we be without those 10 brief hours?

We all read a lot of hugely-justified praise for Sir George on the occasion of his passing. But we’d like to focus on these few individual moments when different choices would have likely changed our musical universe.

We’d also like to pause and admire his character. From a fan’s distance, at least, he remained ever dignified and elegant. Although acutely aware of his profound contribution to the band’s success, he always gave credit first to the Beatles’ songwriting, musicianship and talent. But there is absolutely no denying he was an artist in his own right.

“When I joined EMI, the criterion by which recordings were judged was their faithfulness to the original. If you made a recording that was so good that you couldn’t tell the difference between the recording and the actual performance, that was the acme. And I questioned that. I thought, OK, we’re all taking photographs of an existing event. But we don’t have to make a photograph; we can paint.”

What a wonderful choice he made.

3 comments on “10 Hours that Changed EVERYTHING”