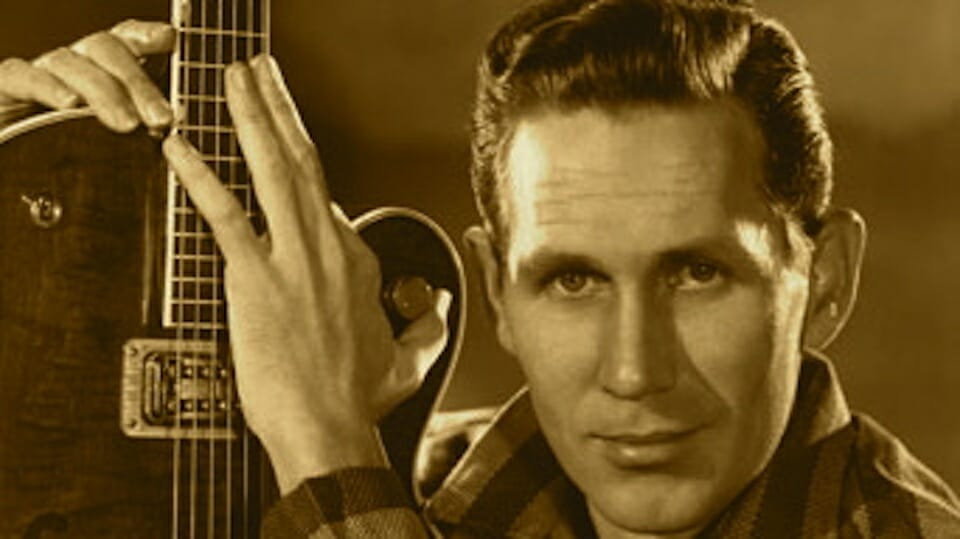 When I read Ken Hymes’ post on pop music of the 1950s, I kept nodding my head and exclaiming “YES!” Though we’ve never met, Ken and I have been working along parallel lines. I recently completed my own analysis of hit songs from the 1950s, only through a slightly different lens: while Ken looked at the top 200 songs from that decade, I considered only the 62 songs that hit #1 on the Billboard charts during the 1950s rock era (starting with “Rock Around the Clock” in July 1955 and ending with Frankie Avalon’s “Why” — the final #1 hit of the 1950s). My analysis was also “guitar-centric”: I wanted to look at the guitar’s role in these #1 hits.

Here are a few of the gems, surprises and trivia treasures I discovered in my research…

1. Scotty Moore’s schizophrenic solo on Elvis Presley’s “Too Much” (1957). Of the 11 Elvis songs to hit #1 during the 50s, this one contains the craziest guitar work. The song is based on a 12-bar blues progression, and the solo starts out well enough with some aggressive energy and a slightly dirty tone (distortion not yet being a thing). But at the solo’s midpoint, you needn’t be a musician to hear that Moore goes off on a wildly dissonant side trip for a few bars before seamlessly gliding back into key for the solo’s end. Oh, to be in the control room when they discussed whether to do another take…

2. Chet Atkins’ shimmering opening chord on the Everly Brothers’ “All I Have to Do Is Dream” (1958). This song was the first #1 hit to use a unique, stand-alone opening chord that instantly identifies the song. Pretty cool, considering later songs that would use the same device: “The Kids Are Alright” by The Who; “A Hard Day’s Night” by the Beatles; “Desire” by U2, and others.

3. The relative scarcity of 1-6-4-5 #1 hits. 1-6-4-5 is a chord progression that fairly screams “1950s!” (and, to be accurate, “Early 60s!”) Think of songs like “Earth Angel,” “Blue Moon,” “Runaround Sue” and “Come Go With Me”; while they may be in different keys, they share the same type of chord progression, which is 1-6-4-5. I was expecting to find many such songs atop the charts in the 50s, yet there were only three: “All I Have to Do is Dream” by the Everly Brothers; “Diana” by Paul Anka; and “Poor Little Fool” by Ricky Nelson. By contrast, there were eight blues-based songs, and a whopping 11 using the good old 1-4-5 chord structure (or a variant thereof).

4. The Fleetwoods. This high school vocal trio (one boy, two girls) from Olympia, Washington charted two #1 hits in 1959: “Come Softly to Me” and “Mr. Blue.” Their vocals are so smooth and mellow as to be almost trance-inducing–don’t listen while driving!–but what really surprises is the guitar work in these songs. It’s smooth and subtle, adding a nice dimension to the already impressive production. The guitar, at least on “Come Softly,” was done by a woman named — are you sitting down? — Bonnie Guitar!

5. Wild Jimmy Spruill! Fantastic nickname, but who is he? Only the answer to a supremely wicked trivia question: Name the session guitar player who played (and soloed) on two consecutive 1959 #1 hits by different artists. The hits? “The Happy Organ” (1959) by Dave “Baby” Cortez and “Kansas City” (1959) by Wilbert Harrison. Now quick, go win yourself a drink or two!

6. “To Know Him Is to Love Him” (1958) by The Teddy Bears. None other than Phil Spector wrote, produced, sang back-up and played guitar on this song, which is significant also because it’s the earliest song (to my knowledge — there must be something earlier) to use the now-ubiquitous “axis of awesome,” aka the 1-5-6-4 chord progression. Sorry, “With or Without You”; sorry, “Let It Be”; sorry, a thousand other songs… The Teddy Bears beat you to it!