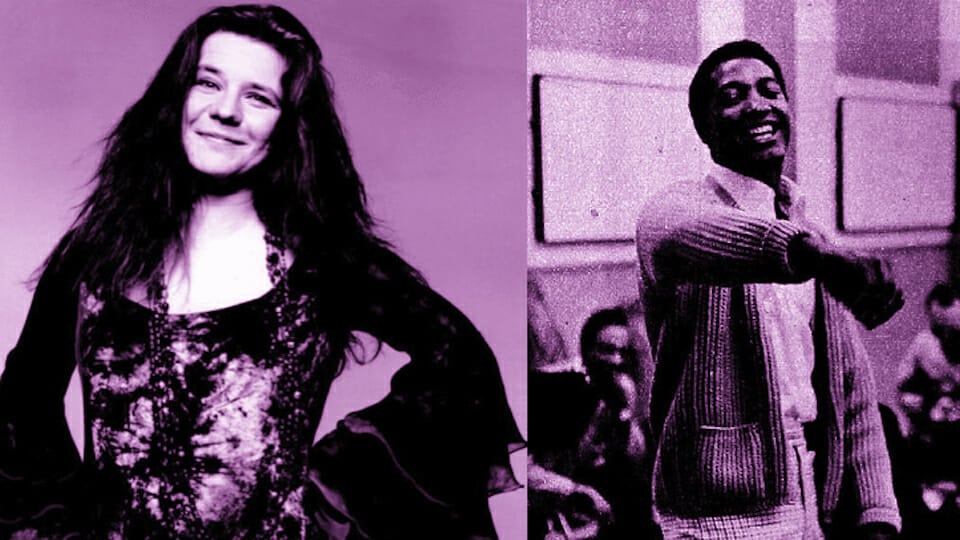 The 1960s spawned a pantheon of rock gods still worshipped to this day. Pop culture superstars whose mythic songs wormed their way into our collective consciousness, and whose colorful lives also happen to make for good copy. Alas, the likes of Janis, Jimi, and Brian Jones left us too soon. While their legacies are assured, their presence today is conjured up mainly via Spotify and Pandora, vinyl and CD. But we can pay tribute by reading their life stories thereby immersing ourselves in the complex histories of the people who made the music we love. Here are nine 60s rock biographies worth your time.

Musician-author Jonathan Gould’s welcome addition to the rock bio canon is encyclopedic yet compassionate, conscientiously detailing the racism of Redding’s time and his efforts to transcend it. Tragically killed in an airplane crash at 26, this soulful gentleman left us some beautiful melodies: “Try a Little Tenderness,” “Respect,” and “Sittin’ on the Dock of the Bay” to name a few. This book burnishes his legacy with a well-deserved luster.

Pop biographer Paul Trynka gives the brilliant, tragic, insufficiently remembered Brian Jones his due in this poignant bio that posits Jones was what made the Rolling Stones who they are. His mysterious drowning in 1969 not only exacerbated wounded egos but was a massive influence on the Stones’ subsequent vibe. The author acknowledges Jones’ human failings but gives him proper applause as well.

Sam Cooke’s legendary status was assured by his posthumously released “A Change Is Gonna Come.” Sadly, he’s just as well known for being shot to death at 33 in a seedy hotel under absurdly ugly circumstances. Peter Guralnick compellingly lays out Cooke’s challenging upbringing and the bigotry that riddled his career. Despite such obstacles, the man still became a crossover sensation with his grip on gospel, soul, and pop. Guralnick delves unflinchingly into the charismatic singer’s many frailties and foibles while honoring his character and his contributions. A superb account of a woeful life.

Cass Elliot, the hippie earth mother in The Mamas and the Papas, had a glorious voice and a sassy spirit, a quick wit and an endearing vulnerability. But Eddi Fiegel unearths her story’s darker side: the fat-phobic mockery she endured, the dangerous addictions, the romantic betrayals. When Cass died alone in a London hotel while on the cusp of a comeback, the press incorrectly reported that she’d choked on a ham sandwich. Feigel sets the record straight in her fond tribute to a lady who loved as deeply as she sang.

English writers Julie Mundy and Darrel Higham take on the estimable task of immortalizing Cochran in this life-affirming account of a young man with rockabilly in his soul. While he met a wildly premature end at 21 in car accident, the stellar singer of “Summertime Blues” deserves to be more than a footnote in rock history. Credit Mundy and Higham for providing a poignant look at a star whose life was refreshingly scandal-free.

Harry Shapiro’s empathetic account of one legendary guitarist’s amazing life focuses on Jim Hendrix’s impact on both the era and other icons of the time. (If you’re looking for gossip, go elsewhere.) Here are the stories behind his enigmatic lyrics and never-seen Hendrix scribbles, which give a window into his creative process. Electric Gypsy is a gentler exploration of the mystical musician and was released to honor the 25th anniversary of his passing.

See Related Content: “How Jimi Hendrix May Have Influenced ‘A Day In the Life'”

New York Times journalist Ellis Nassour admirably sketches out the life of a preeminent country artist who lived to the fullest, died tragically at 30, and left the world such enduring hits as “Crazy” and “I Fall to Pieces.” Rich with detail, Nassour’s book features interviews with Dottie West, Brenda Lee, and Jean Shepard as it fleshes out a more intimate picture of this enigmatic vocalist who endured more than her share of abuse (financial and otherwise). The updated edition circa 1989 has a great photo section and reams of personal letters.

This book’s cultish popularity reignited a mass obsession with Jim Morrison almost a decade after his death in Paris at 27. Co-authors Danny Sugerman and Jerry Hopkins obviously worship their brooding protagonist and their gushy approach makes for a wild introduction to The Lizard King. Fun to read, No One Here Gets Out Alive remains a must for Morrison fans.

Janis Joplin’s powerful essence, heartfelt singing, and utter rawness are beautifully honored here. Released shortly after her tragic heroin overdose in 1971, Buried Alive was written with warmth and gusto by someone who knew her quite well: her publicist and dear friend. Try to find an older edition if you can… subsequent reprints are missing the wonderful verbatim letters Janis wrote and which express her inner voice so enticingly.