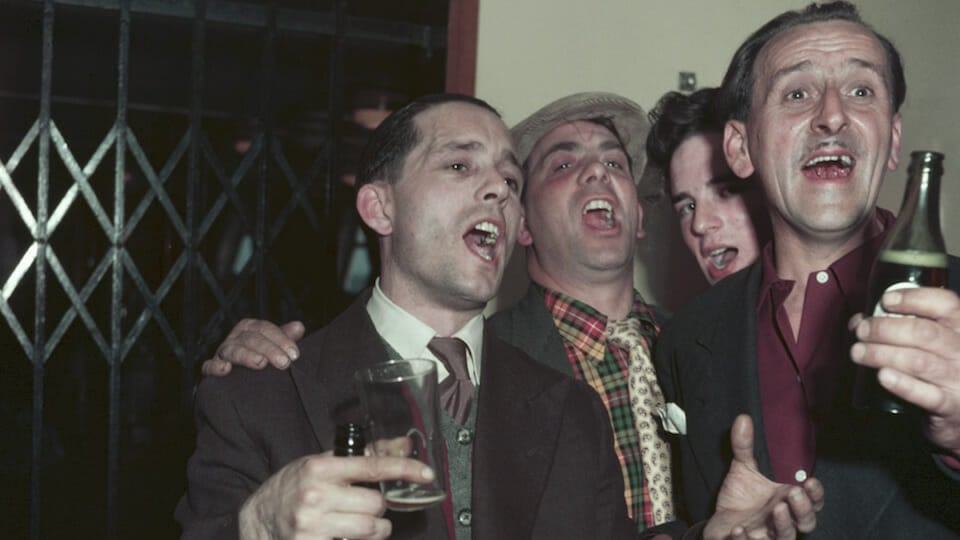 To accompany the video for “Shy People Need Alcohol” by my band The Ex Teens, the nice people at CultureSonar suggested I survey some notable pop songs about drinking. So let’s line ‘em up. Rather than review the most familiar songs about liquor — I leave it to braver souls among you to shake up a fresh commentary-cocktail about “Margaritaville” or “Escape (The Pina Colada Song)” — I thought I’d navigate a woozy path between some big hits and some lesser-known but nonetheless intoxicating cuts. So here, in no particular order, is one possible playlist of potent, potable pop. And while you’re here, be sure to check out our video.

The wild, loopy energy of intoxication has rarely been so viscerally conveyed as it is on this (mostly) instrumental gem, with its modified mambo beat and bleating horns. It’s loose and lewd and ridiculous, like every drunk in the world. And it’s featured in an unforgettable sequence in Pee-wee’s Big Adventure.

“So sweet and heady…” The titular concoction is a bit of a love potion, as well as a remedy for heartbreak. So’s this song. (And if Nina’s version leaves your thirst for “Lilac Wine” unslaked, I refer you to covers by Jeff Buckley, Eartha Kitt, and Miley Cyrus.)

Merle Haggard’s “Tonight the Bottle Let Me Down”

This honky-tonk classic is the best tune of all time about drinking to forget—and failing. “But tonight your memory found me much too sober / Couldn’t drink enough to keep you off my mind.”

What happened to all those soused cowboys after they left the bar? A lot of them stumbled home in a sloppy, amorous mood, and Loretta is not having that mess. Ironically, the chorus is so damn catchy you just want to pour another round.

There are only, I dunno, 10 gajillion country songs about alcohol. But this hilarious singalong anthem is the only one I know that’s sung from alcohol’s point of view. Let’s just say that the hooch has an understandably jaundiced view of humanity.

She took a beer and left for good. That’s the unremarkable plotline for this killer tune, yet another illustration of why country lyrics put most other pop songwriting to shame when it comes to beer: “If she had to leave did she have to leave me one beer short of a 12-pack?”

Stapleton’s exquisite reimagining of a tune originally recorded by George Jones is a sublime drunk-on-love song. This time the booze is largely a metaphor.

Snoop assures us he’s “laid back,” but this monumental, Dr. Dre-powered “G-Funk” track charts a fearless path between exhilaration and menace with its stalking groove and ribbons of synth melody. Then the chorus kicks in, and the world is a motherf**kin’ party.

The excesses of the ‘70s have rarely been cataloged with such blazing riffage. To be clear, we’re also “drinkin’ cocaine.” Oh, and, ol’ Pat yells “insanity!” before peeling off a fiery solo.

The Aussie rock titans pour out an unrepentant anthem for a night out you’ll never remember. How far does it go? “I’m trying to walk a straight line / On sour mash and cheap wine.”

“Schnapps, Chianti, porter and ouzo, Pernod, vodka, Sambuca, I love you so…” The establishment in question sounds a lot like purgatory, but this hurtling rocker features some wonderfully barbed Costello lyrics and a truly odd menu of beverages.

No list of drinking songs would be complete without a great hangover song, and this headsick ramble makes art of the aftermath. “There’s a taste in my mouth like the thoughts in my mind” — one of many perfect Chris Difford lines. Glenn Tilbrook’s guitar solo, meanwhile, unspools the agony.

And now it’s my pleasure to present the lyric video for The Ex Teens’ “Shy People Need Alcohol,” with graphics by the great Van Arno. The song appears on our EP Get on an Ice Floe, which you can find on all fine digital-service providers. Bottoms up!

0 comments on “13 Great Songs About Drinking”