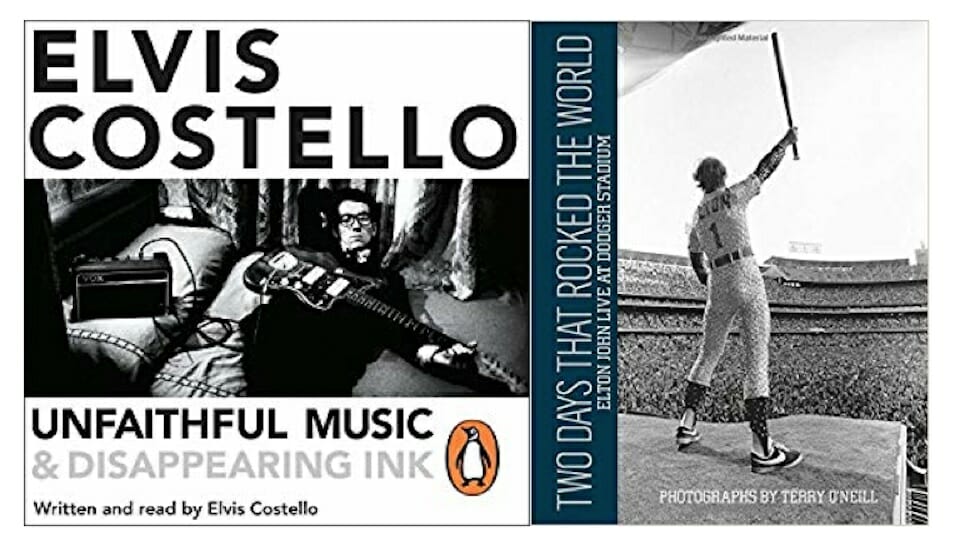 Two great books for music lovers are just out. They both have an “E” related to the title. That’s where the similarities end. First up, Elvis Costello with Unfaithful Music & Disappearing Ink (Blue Rider Press). It’s 670 (yes, really) pages of Elvis, a.k.a. Declan McManus, ruminating on his back catalog, his tender years, his epic screw-ups, his favorite songs by others… It’s pretty rich stuff. Considering that he’s worked with everyone from Paul McCartney and George Jones, to Tony Bennett and Tom Waits, dude has a whole lot of great stories to tell. Yes, 670 pages seem a bit extreme. But Elvis has 61 years worth of great stuff to share. So I plan to lay in a few cans of Red Bull and plow through.

Next up, Two Days That Rocked the World: Elton John Live at Dodger Stadium (Antique Collectors Club Dist). Legendary photographer Terry O’Neill has put this epic photo book together, recounting one of THE great moments in rock. The photos were taken right after Captain Fantastic and the Brown Dirt Cowboy came out (from there, it all went south as far as I’m concerned). O’Neill captures Elton on his private plane, backstage during the 2-day concert run and more. From what I’ve seen, it captures a time in music when a sequined baseball uniform and an actual lion on stage was de rigeur. And it captures Elton at his absolute piano man peak.

O’Neill notes that revisiting these photos after more personal info came to light (e.g. the photo of Elton waking up came after he had tried to commit suicide the night before. Whoa…) provides a certain context about the real person behind the crazy ‘70s rock façade.

So, I’m teeing up the “E” books. Can hardly wait for “F.” Hope it’s not Frankie Goes to Hollywood.

0 comments on “A Different Kind of “E” Book”