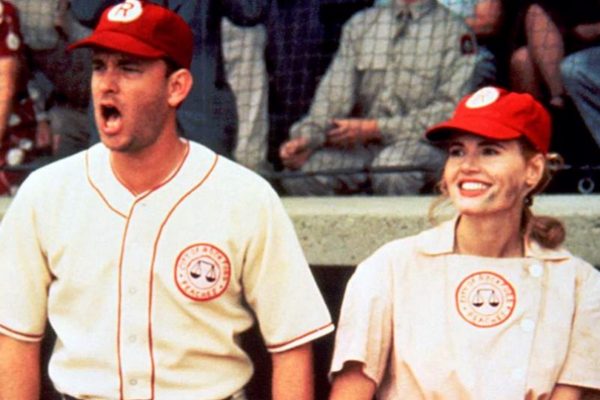 Much like the real life All-American Girls Professional Baseball League, A League of Their Own was largely ahead of its time. Not only is it a film full of women, it’s also about sports, is devoid of a romantic plot line (a flirtation/affair between Geena Davis and Tom Hanks’ characters was filmed and eventually scrapped), and has a woman, Penny Marshall, at its helm. I’m not sure whether it’s sad or funny that 25 years later, Hollywood is just now realizing that movies full of women directed by women do very well at the box office and critically with women and men alike. It may not have had the box office power of Wonder Woman, but in its own ways, the wonder women of A League of Their Own broke molds and inspired audiences all while being ridiculously entertaining.

A League of Their Own is primarily a love letter to what would have been an otherwise mostly forgotten piece of wartime and sports history. Fearing a financial collapse of Major League Baseball parks around the country when players like DiMaggio and Berra were being called up to fight overseas, chewing gum king and Chicago Cubs owner Philip K. Wrigley and several other prominent Midwestern businessmen started the All-American Girls Professional Baseball League (AAGPBL) in 1943 to recruit women to play professional baseball and keep profits and spirits up. The league grew steadily in popularity, expanding to a total of 15 teams around the upper Midwest region and ran successfully until 1954. For their unique efforts and serious athleticism, the women of the AAGPBL were officially inducted into the Baseball Hall of Fame in Cooperstown, NY in 1988.

This 1988 Baseball Hall of Fame induction serves as the entry-point into Penny Marshall’s film, flashing back to tell the story of two sisters, Dottie Hinson (Davis) and Kit Keller (Lori Petty), who leave their sleepy Oregon dairy farm to join the Rockford Peaches during the AAGPBL’s first slightly rocky season. Tall, elegant, and a naturally gifted athlete, Dottie’s perceived “perfection” often frustrates petite and spunky pitcher Kit who always feels like she’s stuck in her older sister’s shadow unable to be seen as anything but a “kid sister.” But both find a place for their talents among the women of the league; all of whom come from various backgrounds but are united by their love of the game.

And that’s one of the things I love best about the film: it’s full of women who outwardly don’t seem like they have much in common, but in the league, they become sisters. Beyond Dottie and Kit, there’s homely tomboy slugger Marla (Megan Cavanagh), who’s raised by her widowed father like a boy and can outhit all of them. There’s former taxi dancer “All the Way” Mae (Madonna) who subverts her overt sexuality by being the best base-stealer on the team. Mouthy third-base player Doris (Rosie O’Donnell) may be second banana to Mae, but she always has your back on and off the field. Relief pitcher Ellen Sue (Freddie Simpson) is a former Miss Georgia but she’ll nail you with a pitch if you accuse her of “throwing like a girl.” Shirley Baker (Ann Cusack) has never learned to read but flourishes under Mae’s unconventional teaching methods. Evelyn Gardner (Bitty Schram) is a harried mother to problem child Stillwell but has a great arm. Helen Hayley (Anne Ramsay) comes from an elegant upbringing but is a menace on first base. Betty Spaghetti (Tracy Reiner) is a devoted war wife and solid outfielder who finds comfort in her teammates when her husband is killed.

The women who make up the beloved Rockford Peaches may look like glamourpusses due to league appearance standards, but they’re all tough as nails. Their motto wasn’t “dirt in the skirt” for nothing. Appearances don’t matter, it’s what you do that defines you. That message stuck with me over the years and is still vitally important for girls and women of all ages to hear today. Always one of the tallest in my class (and my little league baseball team), I saw a lot of myself in Geena Davis’ Dottie; not just physically, but the way she took charge of situations and never apologized for her abilities. None of the women do despite fans’ and even Jimmy Dugan (Hanks)’s doubtfulness. The women simply play their hardest, winning games and eventually winning over fans and Dugan, who quickly realize athletic talent is genderless. And when Dugan is offered a chance to coach a men’s AAA team at the end of the film, he declines, saying he already has a great job coaching the women of the Peaches who he’s come to respect both on and off the field.

Beyond the way A League of Their Own handles the gender dynamics of sports and WWII America, it’s endlessly entertaining from start to finish. With warm, charming performances from its entire cast, great direction, and a hilarious script, it’s a total home run. Despite its historical setting, the film feels timeless, which may be why it’s as enjoyable and fresh now as it was 25 years ago. And yes, the cast really does all their own throwing, catching, and hitting. Penny Marshall was adamant every woman could believably play baseball, so the cast (including the Material Girl herself) trained eight hours a day for seven months prior to filming. How about THAT for some serious girl power?!

On its surface, A League of Their Own is a breezy female-centered sports comedy, but it has an emotional undercurrent that hits you when you least expect it. Don’t be surprised if, like me, you still find a few tears in your eyes watching these majorly inspirational Girls of Summer play their hearts out even after multiple viewings. Guess there IS crying in baseball after all.

1 comment on ““A League of Their Own”: How the All-American Girls of Summer Changed the Game”