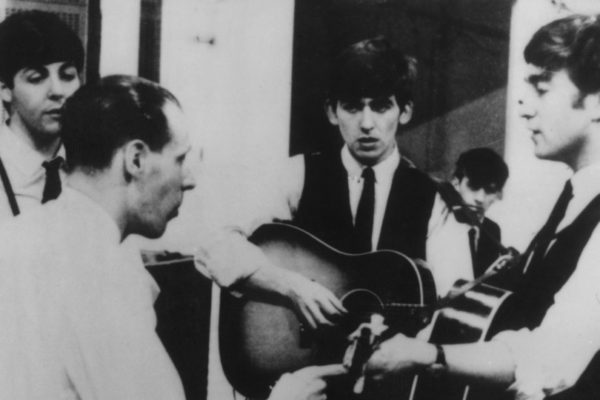 They were known as the Fab Four, and it usually took only John, Paul, George and Ringo to create musical magic. But, every once in a while, The Beatles looked outside the core four for others to help them out. Occasionally they didn’t know how to play whatever instrument the song required. Other times it was a matter of improving band dynamics by bringing in an outside artist as a kind of special guest. Many of the names on this list may be obscure to all but the most hardcore Beatle fans, but all of their contributions were essential to some of the most memorable songs in the band’s esteemed catalog.

1. Andy White on “Love Me Do” (1962)
Even though Ringo Starr was already a band member, session drummer White handled the skins on the recording of the band’s first-ever single release as The Beatles. It’s not the most complicated song for drummers — and Starr played it just fine on the album version — but White, at the very least, didn’t get in the way of it becoming a Top 20 hit in Britain, assuring the band would get another shot in the studio. They would turn that shot into the smash hit “Please Please Me,” starting Beatlemania in earnest.

2. Johnnie Scott on “You’ve Got To Hide Your Love Away” (1965)
John Lennon’s beautiful, bereft ballad from the Help! soundtrack received an integral instrumental assist from an unlikely source when Scott added a flute part at the song’s end. That little bit of the exotic took the song from being just a typical acoustic waltz with Dylanesque tendencies and transformed it into something a bit more mysterious and unique.

3. George Martin on “In My Life” (1965)
This classic ballad caused a stir in later years when both Lennon and McCartney claimed to have done the bulk of the writing. What can’t be denied is that the baroque piano solo played midway was a bit more involved than any of the group members could handle. Martin couldn’t quite do it either, but his idea to play the solo half-speed and then speed up the tape was just what the song ordered.

4. Alan Civil on “For No One” (1966)
One of McCartney’s most heartbreaking slow ones on Revolver gets a big boost from the French horn played by Civil in the instrumental break. Civil reportedly chafed at McCartney’s insistence on extra takes, but it paid off; his part captured the wounded dignity of the song’s hapless protagonist, who seems to be the last one to know that his love is imploding and there’s nothing he can do about it.

5. David Mason on “Penny Lane” (1967)
During the early sessions for Sgt. Pepper’s Lonely Hearts Club Band, McCartney was mesmerized by a high-pitched trumpet one night while watching a television performance of a Bach piece. He decided then and there that it would be just the thing to embellish this song detailing childhood memories of Liverpool, so Mason added the majestic flourish of the piccolo trumpet.

6. Anna Joshi, Amrit Gajjar, Buddhadev Kansara, and Natwar Soni on “Within You Without You” (1967)
Harrison’s lone composition on Sgt. Pepper’s Lonely Hearts Club Band brilliantly melded his fascination with Eastern music with his grasp of Western song structure. The Indian musicians listed above managed to create a hypnotic rhythmic foundation from which Harrison’s wending melody springs, creating an aural experience unlike anything most Beatle fans had encountered up to that point.

7. Eric Clapton on “While My Guitar Gently Weeps” (1968)
Harrison was apparently fed up by bickering between band members and brought in Clapton, already a legend on electric guitar, to do the weeping guitar bit in this brooding standout off The White Album. Clapton managed to deliver an anguished bit of guitar commentary on Harrison’s enigmatic lyrics and did so without pulling the song out of The Beatles’ comfort zone.

8. Chris Thomas on “Piggies” (1968)
Thomas was deputized as temporary band producer while George Martin took a brief vacation during the sessions for The White Album. He also stepped in to play the harpsichord on Harrison’s satire of greed and excess. The Victorian feel of the instrument is the perfect counterpoint to Harrison’s story of swine that turn on their own and need a “damn good whacking.”

9. Billy Preston on “Get Back” (1970)
Here was another situation where Harrison tried to make the other Beatles play nice by bringing in a respected musician from outside the group to defuse some of the tension. The group loved Preston’s work so much that he ended up playing keyboards all over the songs from the Let It Be sessions. Perhaps his most memorable and soulful turn comes on McCartney’s boogeying hit single.

10. Brian Jones on “You Know My Name (Look Up The Number)” (1970)
Jones had already passed away by the time this long-in-gestation, comic B-side was released in 1970. But his squawking saxophone solo is a fitting way to end this list. After all, his ability to play a variety of unusual instruments, including marimba, sitar and flute, meant that The Rolling Stones, The Beatles’ chief rivals for British Invasion supremacy, rarely needed guest musicians for the special flourishes in their songs.