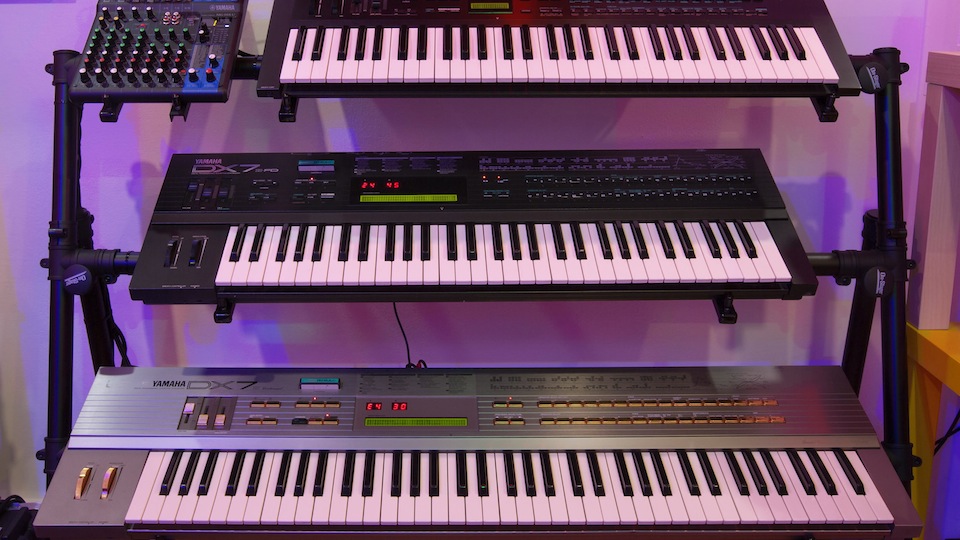 When you think of ’80s music, what are the sounds that come to mind? Maybe drum machines? Guitars drenched in echo? Anguished vocals?

Yes. Yes. And yes. But let’s not forget the mighty DX7.

You don’t have to be a synthesizer geek to appreciate the Yamaha DX7’s impact on pop culture. Its punchy bass, breathy flutes, and crystalline bell and piano tones literally soundtracked much of the 1980s, gracing hits by Tina Turner, Kenny Loggins, A-Ha and Hall & Oates as well as the scores of movies like Top Gun and Ghostbusters. Additionally, the DX7 introduced technological innovations that changed how electronic music is made. We asked a few insiders to help us understand this revolutionary machine’s unique charms and where and how its distinctive sounds can be heard in pop music today.

Japanese-based Yamaha birthed the DX7 in 1983, but its roots go back much further — to late ‘60s California. That’s where Stanford University professor John Chowning made his groundbreaking discovery: frequency modulation synthesis (FM, for short). “Dr. Chowning was a composer writing computer programs to help him compose electronic music and, as I understand it, stumbled upon FM by mistake,” says Yamaha Product Marketing Manager Nate Tschetter. “He was trying to write a program that would put vibrato on a sound and, in doing so, made that vibrato really, really fast—to the point where it changed the original sound into something more complex.”

Whereas analog synths of the era used “subtractive synthesis”—requiring users to tweak knobs to filter and shape sound— FM allows a sound wave to rapidly increase or decrease its vibrations, which create entirely new frequencies and harmonically rich overtones that hadn’t really been heard before. Chowning immediately saw FM’s commercial potential, but keyboard manufacturers such as Hammond and Wurlitzer turned him down. But a team of Yamaha staffers visiting Stanford in the early ‘70s understood Chowning’s vision and licensed the technology. After a few years refining the original algorithm—and a proof-of-concept release (the GS-1 synth in 1980)—Yamaha released the DX7, a synth that would change the way musicians (and the rest of us) thought about synthesizers.

The DX7 was sleek with green switches, a small LCD screen, and a slider to scroll through options in place of the plethora of knobs, buttons, and faders typical of analog synths back then. Velocity-sensitive keys (i.e. sound affected by finger pressure, just like on a real piano) made the device appeal to all kinds of keyboardists, not just synth and electronic music enthusiasts. “Analog synthesizers were great but they weren’t really good at being expressive,” says Tschetter. “Love the DX7 Rhodes [electric piano] sound or not, it’s an expressive sound and it provides this piano-like experience that was dynamic and could cut through a band with a bunch of guitars.”

At just under two grand (about $5k in today’s dollars), the DX7 wasn’t cheap, but it was less expensive and more portable than contemporary counterparts like the high-end Synclavier 1. In fact, Tschetter notes, the DX7 had a “convergence of things in its favor” that made it ideal for studios and home users. “It didn’t sound like anything else on the market… It was programmable, had patch memory [instant recall] and was one of the first keyboards with MIDI [a.k.a. Musical Instrument Digital Interface], so you could integrate and communicate with other systems. As a keyboard player, you could get a sequencer and a drum machine and make music without going into a studio and hiring a bunch of musicians.” And if the 32 factory presets approximating strings, pianos, flutes, brass, bass, timpani, bells, and more didn’t necessarily sound like the real thing, they did have a character all their own.

Not that the DX7 didn’t have its critics. Compared to an analog synth’s instant knob-tweaking gratification, many users found the instrument’s “change-one-component-at-a-time” approach challenging. Unless you were Brian Eno, who teased out wonderfully rich and layered tones from his DX7—including those on his ‘80s ambient LPs and U2’s Joshua Tree—most people bypassed programming in favor of the factory presets. Detractors say that’s why so many recordings of the period have the same sounds.

But as Tschetter points out, the barriers that discouraged many DX7 players from programming their own sounds gave rise to a cottage industry of third-party content developers. “There were enough people who could gel with the operating system and could create sounds and because it had this memory cartridge they could manufacture them and sell them.”

The DX7’s quintessential bass sound surfaces on so many mid-to-late ‘80s tracks (Hall & Oates’ “Out of Touch,” Tears for Fears’ “Shout,” A-Ha’s “Take On Me,” Depeche Mode’s “People Are People,” Rick Astley’s “Never Gonna Give You Up”) that it’s hard to choose just one to illustrate it but Kenny Loggins’ “Danger Zone” is a good example of how the bass sound more than holds its own amidst the song’s drum machines and power chords.

All Rhodes Lead to E.Piano 1 Preset

The DX7’s E.Piano 1 preset—arguably its most recognizable sound—is so similar to a Fender Rhodes piano that many still disagree whether it’s a Rhodes or a DX7 on tracks like Whitney Houston’s “Saving All My Love for You.” Though he’s seen tinkling an acoustic piano in the music video, Phil Collins played a DX7 on his chart-topping single “One More Night” from 1984’s No Jacket Required.

The DX7 came to the rescue when producers of Tina Turner’s 1984 comeback hit “What’s Love Got to Do With It?” didn’t quite like the sound of the harmonica part played by session man Nicky Payne. Keyboardist Nick Glennie-Smith tweaked the DX7’s harmonica patch so it resembled a flute, thereby providing the perfect complement to Turner’s impassioned vocal performance.

While the DX7’s original production run is long over, the instrument still inspires high-profile artists from Bruno Mars (who used a DX7 for “Versace on the Dance Floor”) to sound designer Richard Devine, who employed Yamaha’s FM-powered MONTAGE synth to manufacture sounds in the Jaguar’s new I-Pace Performance SUV.

Sam Ash Technology Product Manager John Muller says customers still ask how they can get that “DX7 sound.” Besides Yamaha’s own DX Reface, a mini version of the original, Muller says there are many software plugins, from developers like Native Instruments and Arturia, that “replicate the sounds of the DX7 and/or have their own form of FM synthesis.”

For a more-or-less accidental discovery, the DX7 has enjoyed a profound legacy. It is, in fact, a Sound That Changed Music.

4 comments on “A Sound That Changed Music: The Yamaha DX7”