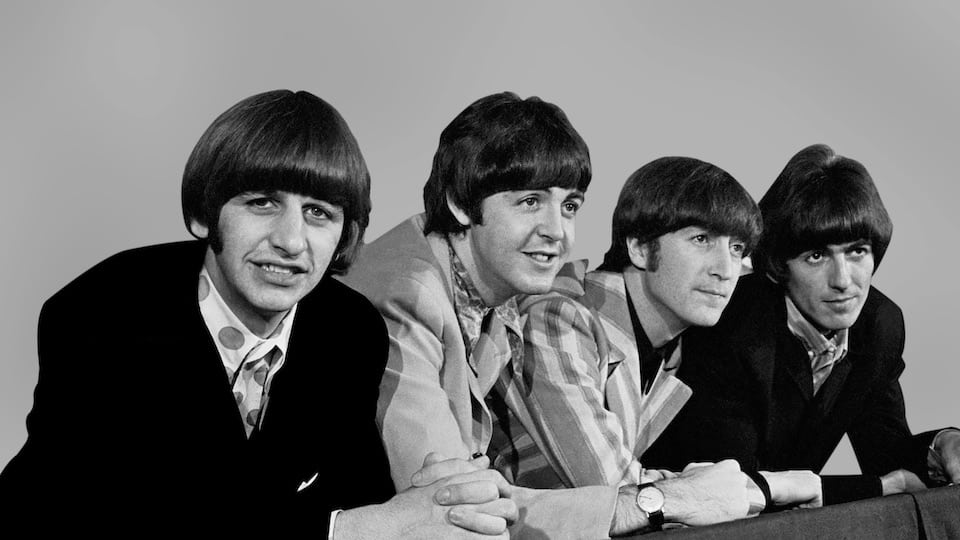 The Sunday, 9 February 1964 edition of the New York Times featured an article entitled “The Beatles Prepare for Their Debut.” It was full of colorful details of the boys’ first visit to America: beleaguered police containing ecstatic American fans, traffic at an utter standstill around the Plaza Hotel and the Ed Sullivan Theater, and all across The Big Apple, parents slack-jawed and stunned. There was mania in the streets, the article claimed, and inexplicable, heady joy. But then, tucked away in paragraph 3, were two sentences that proclaimed: “There were dissenters, however. A tall youth waved a placard that read, ‘Alonso Tuske Hates The Beatles.’”

But that’s not the end of the Alonso story! In a tongue-in-cheek article penned  August 13, 2020 – for the Salzburg International Academy of Fine Arts Summer Academy program – artist, novelist, and essayist Tex Rubinowitz claimed that on Friday, 7 February 1964, “Alonzo [the spelling Tex prefers] stood in the midst of 5,000 screaming fans and 200 journalists…on the tarmac of New York Airport…carrying a poster that said, ‘ALONZO TUSKE HATES THE BEATLES.’” And so, the plot thickens. Alonso was not only outside the Ed Sullivan Theater, he was also courageously protesting The Beatles’ arrival at JFK!

Rubinowitz wrote, rather knowingly: “Alonzo is proof that bravery makes you lonely.” And even 60 years after the fact, we do feel some sympathy for the unhappy teen.

But don’t weep for Alonso (zo) just yet. Because Tuske has emerged from his brave but lonely vigil as a bit of a legend…a bold non-conformist. Indeed, Rubinowitz’s Summer Academy article also claims a sighting of Tuske in Obertauern, Austria during the spring of 1965, where the lad was apparently still staunchly protesting The Beatles as they filmed their second United Artists movie, Help! Somewhere along history’s road, Tuske, it seems, achieved tall-tale status. Like the cartoon hero Savoir-Faire, “He’s everywhere! He’s everywhere!”

And yet, he can’t be found. Believe me, I tried. Alonso’s not on Facebook, Twitter, Instagram, or LinkedIn.  I located Annamaria Tuske, who wrote Determinants of the Low Female, The Alonso-Muth-Mills Models (AMM) for Stanford in 2015. I found a plethora of esteemed scientists and sociologists surnamed Tuske. One musician. But not one Alonzo (or “so”), however. The closest I came to a current reference to the brave Beatles mutineer was a nod given to him by Peter Wylie and the Oedipus Wrecks who subtitled their 1986 single “Sinful!” with “God Bless Alonso Tuske.”

Over the last few weeks, I’ve come to wonder if Alonso’s not, in some sense, a symbol.  A shadowy representation of those who, for one reason or another, were slow to board The Beatles’ (Magical Mystery) bus.

I wonder if Alonso, in February 1964, still had a firm grasp on the music of the 1950s and early 60s. If songs such as “Blue Velvet” and “Mack the Knife” and “There, I’ve Said it Again” coursed through his blood. If the howl of “Wolfman Jack” and sweet, sentimental Doo Wop harmonies peopled his dreams. They certainly filled John Lennon’s heart. If, in the 1970s, Alonso ever gave Lennon’s Rock’n’Roll LP a listen, I think John just might have won the boy over. It’s possible.

Perhaps Tuske, in 1964, was a staunch nationalist whose pride in American artists such as the Beach Boys, the Temptations, the Four Tops, and Elvis precluded a “hands across the water (water!)” welcome to the ring leaders of The British Invasion. In 1987, I had neighbors in Simpsonville, South Carolina who still refused to listen to anything but “good ole American beach music” (think “Miss Grace,” “Backfield in Motion,” “The Oogum Boogum Song,” and “Under the Boardwalk”). They clearly saw Paul, George, Ringo, and especially John as dangerous subversives.

It’s more than likely, however, that Tuske’s reluctance to embrace the Fab Four and their “Yeah, yeah, yeahs” lay in the lads’ grand good looks, extraordinary talent, and unforgivable charm. Every French detective knows that in the heart of a mystery lies the phrase, “Cherchez la femme.” (“Find the woman.”) Alonso – who didn’t dislike The Beatles, mind you, but hated them! – must, quite early in the game, have had his heart broken by some screaming female who failed to see his potential for historical greatness. Instead, she glimpsed Paul’s doe-like eyes or Ringo’s sweet smile or George’s winning three-step shuffle, or John’s brazen swagger, and when she “saw them standing there,” Alonzo must have vanished – a blurry childhood memory swiftly replaced by the four men who would take her into adulthood.

Lately, I’ve spent considerable time wondering what happened to that salty New York teen and his bold placard. I’ve wondered if Alonso continued to despise the band that gave us “All You Need is Love” and “In My Life” and “Michelle” and “Hey Jude” –  or if, at some point, the Fab Four touched his heart as they touched ours. Wherever Alonso is and whatever he is doing, I like to think that he eventually became a fan along the way.

Alonzo, if you’re out there, won’t you reach out and let us know? Did you ever find redemption in The Beatles’ vast catalog? Did you guess that they might have written “Sgt. Pepper’s Lonely Hearts Club Band” for you? Have you sneakily seen Sir Paul or Sir Richard in concert? Were you one of the Hari Krishna faithful at John and Yoko’s bed-in for peace? Did an instrumental version of “Something” grace your wedding reception? Or are you still “the lone voice of reason” in a world gone Beatle-mad?

The Oedipus Wrecks salute you, Alonso. Tex Rubinowitz (who hasn’t seen you since Austria) would love for you to chime in. And quite honestly, I want to know if you’re out there. I could remind you that “you and I have memories longer than the road that stretches out ahead,” but if you stand with the placard still, you might not know that reference. My gut, however, tells me that you do. And that is a story I’d love to share. Open the door and let us in…