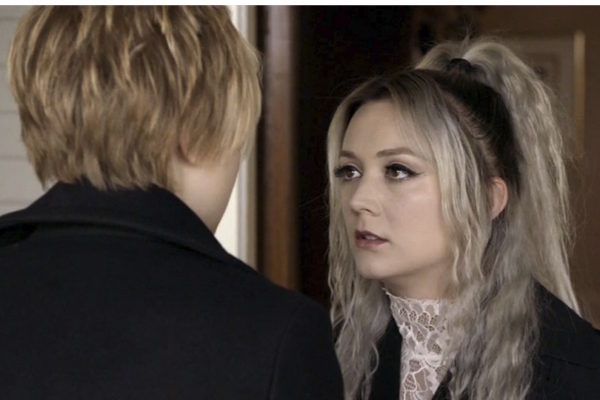 Starting with the decade-defining Nip/Tuck, TV auteur Ryan Murphy has proven that he not only loves to make viewers squirm through gore and irony, but that he is unequaled in his ability to provide the experience. Time will tell which of Murphy’s legacy will be most influential – there are still fans ferociously devoted to Glee and Scream Queens – but with American Horror Story, Murphy not only resurrected the anthology drama, but reinvented it for contemporary audiences. Better yet, he keeps on reinventing it with every season. With reportedly two seasons of AHS still contracted, who knows to what dimensions of fear and fashion Murphy will yet take the audience. Until then, just in time for Halloween fright nights, here’s our ranking of that series’ seasons so far.

7. “Roanoke” (Season 6)
Roanoke’s double-premise ultimately collapsed under the weight of its own eccentricity. It was an oddball ode to the button-pushing Blair Witch Project by way of Lost Colony outdoor theatre. Colonial America may be rife with possibilities for terror tales — if for no other reason than the Salem witch trials — but this cycle’s pseudo-documentary conventions simply pointed out that time at haunted locales is better spent with a stay at The House of the Seven Gables or an all-nighter in Sleepy Hollow.

[amazon template=right aligned image&asin=B00OQUZQZO]6. “Freak Show” (Season 4)
The fourth season was certainly ambitious but ultimately too much so. Horrifying elements, from killer clowns to Nazi atrocities, played nicely with the atmosphere of a traveling sideshow;  ultimately, though, “Freak Show” didn’t find much beyond what HBO’s Carnivale and Tod Browning’s Freaks had already done. Still, there were some fine moments, as when Jessica Lange’s legless ringmaster delivered Bowie’s “Life on Mars” as an all-out operatic aria. “Freak Show” is also worth checking out for the outstanding freak-fest of its art direction — a hallmark of AHS for every season.

5. “Asylum” (Season 2)
The sophomore effort had one of the series’ strongest of the ensemble casts  (a backbone of the AHS franchise). Led by Jessica Lange and Zachary Quinto as the lunatics in charge of the asylum, this cycle was strong in performance, premise, and jaw-dropping art direction. “Asylum” came undone as the season unraveled  — perhaps an apt metaphor, but an unintentional one.

4. “Murder House” (Season 1)
The series began not with a bang, but a mortgage, as a New England family decided to start anew in Los Angeles in an ill-chosen mansion. “Murder House” not only premiered the AHS franchise, but many of its now-established characteristics ( a recurring ensemble; characters, concepts and concurrent plot lines). If, for no other reason than being new and excellent, “Murder House” rates as groundbreaking.  And yes, there are multiple Hollywood tours that stop at the Murder House where this installment was largely filmed.

3. “Hotel” (Season 5)
A triumph of sheer excess, “Hotel” is stylistically the most advanced season — as you’d expect from a property that has to shelter Lady Gaga. Gaga brought more than costume changes to her role as matriarch of a hotel where guests check in but don’t check out. Both in drag and in performance, she was matched by Denis O’Hare’s wry bartender and Kathy Bates’ morose desk manager. The story plundered its Los Angeles setting with one glaring hiccup: a Rudolph Valentino storyline that got in the way of an otherwise glorious stay.

2. “Cult” (Season 7)
So far, the current season is doing a bloodcurdling job of manipulating the current political climate. The series mixes a lesbian couple running a hipster restaurant and angry young men pounding out their humiliation through words and weapons. There’s gender-fluidity and political rigidity; anger at the present and terror in the face of the future. The scares and shocks are almost cartoonish, and all the more effective for their context. That is AHS at its strongest: irony as commentary on fear, conveyed via ultra-high style.

1. “Coven” (Season 3)
In its scenario exploring witchcraft in New Orleans, Coven is AHS’s masterpiece in every way. While “Coven” is entertainment not documentary, it could hardly have been more respectful in its treatment of the subject. Nearly every trope from The Craft of The Wise works its way into this season, including sexy witches, hereditary witches, voudouns, Southern Gothics, kitchen witches, warlocks, and a character obsessed with Stevie Nicks. There are also tribunals, a burning, and Stevie Nicks Herself. “Coven” is fierce, wild, and supremely elegant; the closest that AHS, or for that matter television, has gotten to true magic in a long time.

PS.  Read more about some featured music in AHS and another spine-chilling series.

0 comments on “Fear and Fashion: Ranking Each Season of “American Horror Story””