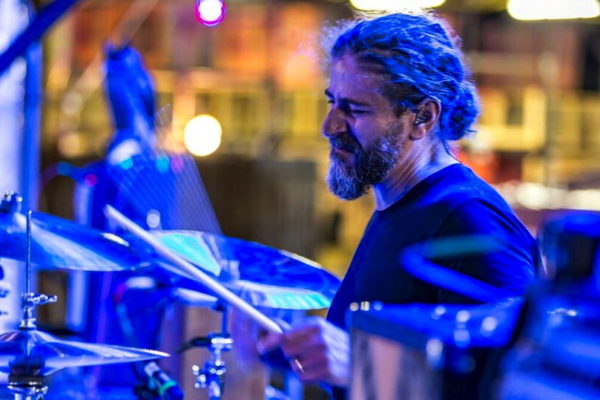 Tony Leone, the drummer for the Chris Robinson Brotherhood, has some serious roots in jazz music, a genre that’s always respected its percussionists. But his career as a musician has expanded well beyond the small jazz clubs he played in his early 20s to include Southern rock, straight-out country, and folk. (Where else would he get to show off his mandolin-playing skills?) We caught up with Leone just before he embarks on the latest leg of his tour with CRB in support of the band’s fourth studio album Barefoot in the Head, and which includes twelve stops in California alone. (Click here for CRB’s full tour schedule.)

[amazon template=right aligned image&asin=B072854BS2]Q: How did you get involved with the Chris Robinson Brotherhood?

A: I met Chris around 2008 I think, at a “Midnight Ramble” at Levon Helm’s barn. We crossed paths a few times over the years, and had some mutual friends, having both played with Phil Lesh of the Grateful Dead. When it happened that he was looking to make a change in his band, my name came up and he called me. I joined the CRB in January of 2015. It’s been a real blast so far. Great guys, great music and, playing as much as we do, the music keeps developing. Not only is Chris a great singer and songwriter, but a great bandleader as well with a serious work ethic.

Q: You guys have toured quite a bit this year. Do you have a favorite city to play in? What is it and why?

A: We always seem to do well in the San Francisco Bay area. As a matter of fact, our year usually culminates at the Fillmore in San Francisco with a few sold out shows. It’s very appropriate, seeing as how we derive much of our musical inspiration from so much of the music that was made within those hallowed walls! We love it there. We have a lot of favorite cities based solely on what we’re gonna eat there as well! (Haha!) New Orleans, Jackson, Mississippi, Philly, Memphis, and Charleston, South Carolina all come to mind.

Q: Do you guys play any music from the Black Crowes songbook? Is there a particular tune the fans demand to hear?

A: We do a couple of the more obscure ones, but generally we stay away from the big radio hits. The biggest Crowes hit we often play is “Hard to Handle, ” which is originally an Otis Redding song.

Q: Which song from CRB’s new album Barefoot in the Head is your favorite to play drums on, and why?

A: The whole band is so proud of this record. I think we all really had a chance to contribute our individual talents to it in a very natural and comfortable way. I think that really comes across in the music. Each of the songs speaks to me differently and allows me to express a different musical facet or character of my drumming. So it’s really hard for me to choose a favorite! I just try my best to play each one with integrity.

Q: You’ve played with some highly influential musicians over the years — including the aforementioned Phil Lesh and Levon Helm. Have you ever come away from any of these gigs with a life lesson? Or a new insight into music?

A: Anytime I’ve had the opportunity to be around any great artist or veteran of this business, I’ve tried to soak up what I could. I’d say the one unifying factor in all these experiences has been to realize the humanity in so many of my heroes. Anyone who’s lasted so long in a life of making music, through ups and downs, successes and failures, is there because inside, they’re still that little kid listening to the radio, or seeing The Beatles on Ed Sullivan or playing air guitar to their favorite records. You try to keep that flame alive every night that you get on stage to play.

Q: Your folk band Ollabelle has an almost cult-like following. Any projects/tours in the near future for that quintet? Your last album Neon Blue Bird came out in 2011.

A: We did a gig a couple years back at the City Winery here in NYC. It was really great. Wonderful crowd, warm, gracious reception. But everyone is so busy with families and other projects, that there’s nothing definite on the horizon. A few months back we did have a conference call where we discussed the possibility of doing another recording, but the right opportunity and time frame would need to avail itself for that to happen. Stars! Align yourselves!

PS.  Learn more about another great under-the-radar band and the group that had a big influence on Chris, Tony and countless others.

0 comments on “Talking “Drum” with the Chris Robinson Brotherhood”