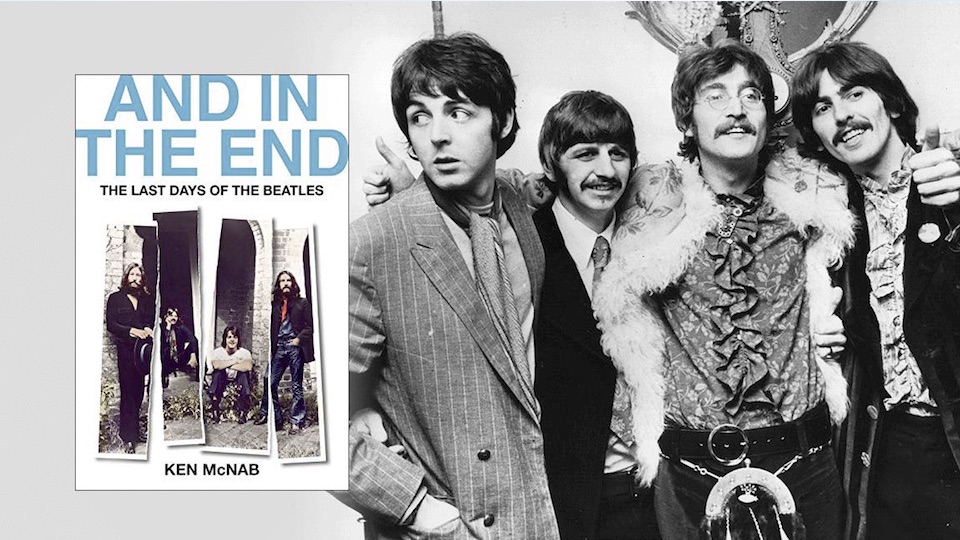 Even a half-century down the road, fascination remains surrounding the 1970 break-up of the most lauded musical group the world has ever known. The press has been on the case for generations. Speculation and gossip run wild and countless books touch on and delve into this very topic. A welcome addition is a new release by Glasgow journalist Ken NcNab. And In the End: The Last Days of the Beatles is a wildly readable account of that painful year that brought The Beatles to an official halt.

Parsed out in month-long chapters leading to their final parting, author McNab accomplishes something remarkable: the mix of a loose, conversant tone with tight journalistic skills. He has gathered fresh illustrative details and minutiae through

interviews with over 30 eyewitnesses to the madness. His sources are not household names, but people who were immersed in the day-to-day particulars of The Beatles’ last efforts to perform as a band, business and recording entity. A hospital nurse, doctors, photographers, music engineers, DJs, and other insiders flesh out the legendary story even further.

The basic facts are known to most Beatle fans: as the foursome began to grow weary of their intense closeness, global fame and changing priorities, bitter feelings built up and began to squirt out sideways.

First, there was John Lennon’s profound love for avant-garde performance artist Yoko Ono. In itself, not a bad thing for a young man to be so deeply enamored with a fascinating woman. But Ono, sometimes referred to as “the blob in black,” made herself an agita-inducing presence in the studio, something no other significant other of a band member ever thought to do. The description of Ono lounging in a bed provided for her in the studio (with a request for a dangling microphone so she could deliver her unsolicited suggestions to a band who did not need her artistic input) is telling. (John speaking to his beleaguered bandmates on her behalf, saying that all she wanted was to be a loved and accepted member of the group is gob-smacking.) Lennon also had a heroin addiction, which shut down his brilliant creativity and contributions for a time, affecting the mojo of everyone. Lennon gets the most coverage here, perhaps because of his enormous public presence and impact with his legendary “Bed-Ins” and quest for world peace.

The other blokes were going through their own growing pains. Paul remained the biggest cheerleader for the perpetuation of the group, which caused ongoing dissension; he also fell in love with Linda Eastman and was ready to embark on a commitment to marriage and family. Ringo was always the adaptable workhorse, keeping a fairly low profile in the band dynamic but wanting to be of service in an increasingly squirrelly set-up. George was perhaps the most emotionally wounded by years of not being given enough respect as the stellar songwriter he turned out to be. He was weary of the unpleasant office politics and began blazing a fresh spiritual path and memorable solo career.

Mix all that in with the complex horror show that was their business manager Allen Klein, a brash, opportunistic charlatan who divided their loyalties further. The whole toxic matter is handled with forensic precision, and McNab makes arcane concepts relatively easy to understand.

And In The End is a work of great journalism and accessibility, dispensing a lot of information that is new to the market. It is a profoundly human account of the splitting up of four young men who, through their musical genius, impacted the planet for all time. There are humorous aspects but a lot of pain to go around, and it is both a sober and enlightening read. They went off to their individual destinies of further triumph and tragedy, but the road to autonomy sure was messy. McNab gives it shape and clarity.

George Harrison’s post-Beatles classic “Isn’t it a Pity” is a heartrending track that addresses the divorce heard ‘round the world. The lyrics “Isn’t it a pity/Isn’t it a shame/how we break each other’s hearts/And cause each other pain” are aching shortcuts to what they all went through. It is a story well worth knowing.

2 comments on “And In the End: The Last Days of the Beatles”