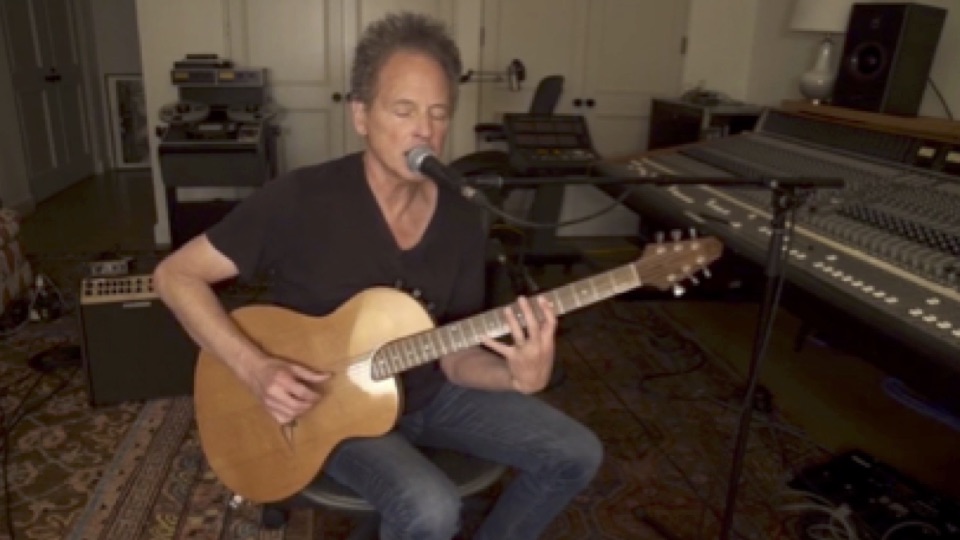 Editor’s Note: This is a review of a live stream event performed earlier this month by Lindsey Buckingham. It consisted of a Q&A ahead of the concert, then an intimate show performed from his home studio in L.A.

When can we expect new music, and where will you be touring?

The album that we will be releasing in the near future is something that has been waiting in the wings for about three years now. For now, we are talking about the United States, Europe, and Australia, which is more than I’ve ever done as a solo artist.

Maybe a duet album with a younger female artist, yet to be determined. Even Mick Fleetwood and I were talking about doing a project together, so who knows? There’s still lots of time.

Do you have a favorite song that you do live where you really like to “shred” it?

How did you create your guitar style?

I was completely self-taught, so there was nobody there to tell me that I had to use a pick. It comes down to the music I happened to be exposed to, but probably more importantly because I made my own way and made my own rules.

What was your biggest contribution to Fleetwood Mac?

I just saw what my role needed to be. They needed a musical visionary and leader, they needed someone who could organize, and produce. I somehow was able to hold the line with the role I needed to fulfill for the band.

[Recognizing the poetics of his lyrics, I asked if he had any inspirations that are writers, poets, or fellow lyricists?]

I would say my lyrics have become more poetic over time, they’re sort of Rorschach Tests, more open to interpretation, and that’s part of what poetry is, I think. Brian Wilson would probably be the biggest example of who I admire, not only for his incredible skill as a musical genius, but he was also a role model. He chose to subvert his level of success in order to follow his art. I’m glad you picked up on the lyrics because that’s something that I feel I’ve been able to bring along over time.

What songs do you listen to for solace?

I always go back to the Beatles albums or, again, some Brian Wilson, something that’s far above me. It’s something I find comforting.

Were you almost a Traveling Wilbury?

After George Harrison passed away, I ran into George’s wife, Olivia. She told me that they had considered me if they had made another album. Things just didn’t get to that point, but I’m touched – that’s an amazing group of guys.

Do you feel any vindication that the Tusk album is looked upon with greater reverence now than it was back in ‘79?

Yes, I do feel vindicated, and I have for some time. For many years now, a lot of young bands have not only appreciated the music on Tusk, but also the riskiness of it following something like Rumours– even when it didn’t sell 16 million albums.

On the separation from Fleetwood Mac:

I was sad to see it happen, not for me so much, but for the legacy of what we’d done. The irony of the fact that we’d gotten through so much for 43 years, that something so minimal could spark something like that to happen.

How do you feel about the fact that your art has become part of a profound memory for someone?

It takes the equation of time to be able to take stock of whether you’ve done your job as an artist properly. Yes, we’re still doing the same old songs, but we’re seeing three generations of people in the audience, to whom our body of work is making sense. That’s what art is for – it’s to share, enhance other people’s sense of possibility, and to hopefully help them through their difficult times. I think we did a pretty good job with that.

Switching between his acoustic, and his iconic Rick Turner Model 1-C-LB guitars, Buckingham played an incredible one-man-show, proving that he has fully recovered [from open-heart surgery in 2019] without a hit to his singing and playing abilities.

Buckingham began his set without introduction, jumping straight into “Bleed to Love Her.” Someone in the Q&A actually asked Lindsey who the song was about, hinting that the timeframe he would have written it was during Fleetwood Mac’s The Dance reunion in 1997. Of course, Buckingham’s answer left more questions than answers, but many fans tend to speculate that the song is about Stevie Nicks. With only his voice and his guitar, he was able to give a deeply personal rendition of the song.

Moving forward in his set, Lindsey said that the next song was about “being in trouble, but in a good way.” “Trouble” was Buckingham’s debut solo single, reaching #10 on the Billboard Charts in 1982. He provided an intense, stripped-back version which cut through the typical 1980s production on the album. A nice touch in his live version is the bluesy guitar riff that he plays in place of the background “ahhs,” that grace the studio version.

Following “Trouble,” Buckingham performed “Shut Us Down.” The song follows a country-folk guitar pattern, with Lindsey singing in a soft whisper. Contorting his hand in ways that didn’t even seem possible, he was able to showcase his proficiencies with a prolonged guitar performance. There were moments towards the end of the song, where he held sustained sonorous screams, making it hard to believe that he was recently in recovery from a vocal-chord-damaging bypass surgery.

Lindsey then performed a profoundly emotional version of “Never Going Back Again,” from the Rumours album. He moved his capo down by two frets from the original placement to compensate for his changing voice. It was no longer an upbeat folk song, instead, it has turned into a cathartic cry, adding “been down one time, / been down two times, / been down three times… never going back again.” Being down “three times” takes on greater meaning considering the three major things that have recently happened in his life: his separation from Fleetwood Mac, his emergency surgery, and the pandemic. Still, his musical abilities have transcended that adversity.

The next song in the set was “Go Insane,” opening ominously as Buckingham growled: “two kinds of people in this world, / winners, losers.” His solo guitar style completely reimagined the studio version of the song. Buckingham’s artful storytelling drew the virtual audience very close, and as the song was reaching a climax, the stream unexpectedly stopped for about 10 minutes, causing many fans to panic, and “go insane.”

Buckingham quickly recaptured the audience with the opening track of Tango in the Night, “Big Love.” This song perfectly highlights Buckingham’s talents as he is able to play an intricate melodic line while keeping the power in his voice throughout the entire song. Watching Buckingham’s performance of “Big Love,” it becomes clear why Fleetwood Mac had to replace him with not just one, but two guitarists

Lindsey opened the following song with an anecdote about its name: “I asked Stevie, ‘What do you think we oughta call it?’ and she said, ‘Why don’t you call it ‘Stephanie?’ That’s Stevie for you. This is ‘Stephanie.’” Written for the Buckingham Nicks album in 1973, “Stephanie” is beautiful, mellifluous, and reveals an early stage of Lindsey’s guitar style. The arpeggiated moves up and down the neck of the guitar, as well as the harmonic blend of notes, reveal Buckingham’s orchestral-minded sensibilities.

Following with “I’m So Afraid,” Lindsey brought us back to the beginning of his partnership with Fleetwood Mac, demonstrating what he brought to the band in his debut album with them. Buckingham was able to render his soul into his guitar and wear his heart on his sleeve not only through the raw vocals but also with his weepy, distorted guitar.

To close his concert, Lindsey performed everyone’s favorite breakup song, “Go Your Own Way.” Enhanced by a backing track, Buckingham played a classic rendition of the Fleetwood Mac hit.

The most unsettling part of the livestream experience is the inability to feel the energy of the crowd. There is no booming applause and no chanting for an encore. When the screen goes black, that’s our indication to “call it another lonely day.”

Image from “At Home with Lindsey Buckingham”