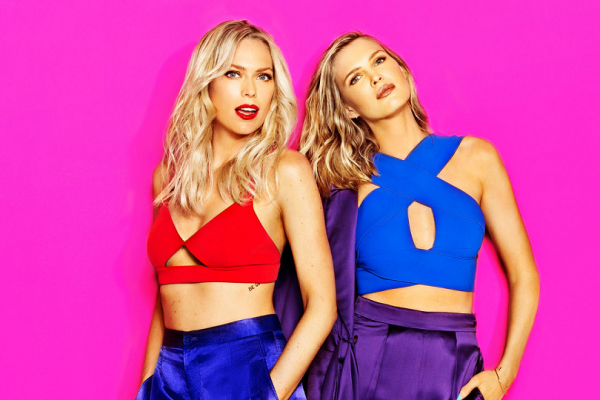 Erin Foster, high on Ambien, laps up water from the desk of late-night talk show host Mo Mandel. At the same time, her sister Sara flees police on a car chase down the freeway with Kate Hudson’s son in her backseat. The uproarious final episode of Season 2 of VH1’s Barely Famous—a faux reality show starring real-life sisters—didn’t end well for either of the leading ladies. But this is what happens when you want to impress your ex-boyfriend (like Erin) or are willing to go to any lengths to acquire a famous best friend (like Sara). On TV at least.

In reality, performers Sara and Erin are the daughters of 16-time Grammy Award winner David Foster. They are stunning, wealthy, and living just on the edge of the A-list. You could say they have everything. But the fictionalized versions of them here are far from satisfied. To the contrary, they’re extremely frustrated, self-absorbed, even desperate. Sara aches to be seen with the right people; Erin wants “normal” friends. Is that too much to ask? Apparently, yes.

It’s worth noting that before Barely Famous, the Foster sisters turned down several offers to do reality TV. They weren’t in hiding, mind you. Erin wrote for NBC’s short-lived The New Normal; Sara appeared in the 90210 reboot. Neither expected to get her own show anytime soon. Fortunately VH1 took a chance with this scripted series that re-imagines Curb Your Enthusiasm for millennials dealing with pregnancy scares and Twitter trolls instead of divorce and carpool lanes.

Sara desperately longs to be with the “in crowd.” She aspires to Kardashian levels of success and considers a potential sex tape of her husband and their nanny as her chance at virality. Fame and free stuff are what she craves. Erin’s goals are simpler. She wants to convince people she’s the type who loves to eat at P.F. Chang’s and doesn’t sext James Franco. But it’s all surface self-deception. When she briefly dates a man in a wheelchair, it’s not because she likes him. It’s to prove a point — one to which nobody happens to be listening.

The cast is rounded out by comedian Naomi Ekperigin as Erin’s manager who quips things like “You’re giving me an older Maggie Smith right now” and Seth Weitberg (Drunk History) who does a lot of truth telling as their VH1 exec who calls one sister “incredibly shallow” and the other a “human shrug.” Best of all may be Abbey McBride as Sara’s fiercely loyal assistant and Erin’s nemesis, all wrapped up in one.

Against the backdrop of a morally bankrupt Los Angeles, this over-the-top twosome somehow come across as sympathetic, despite their millions and famous father. Sara quickly realizes the empowering squad she joined is far from supportive. Erin learns her PR-motivated boyfriend is cheating on his wife and kids. Ironically, these two are already living the same vapid, hypocritical life to which they aspire. Watching them fail at attaining squad goals is tirelessly uplifting.

You can watch Seasons 1 and 2 of Barely Famous at Hulu and Amazon.

0 comments on ““Barely Famous”: What if Larry David Were a Beautiful, Young, Rich Woman?”