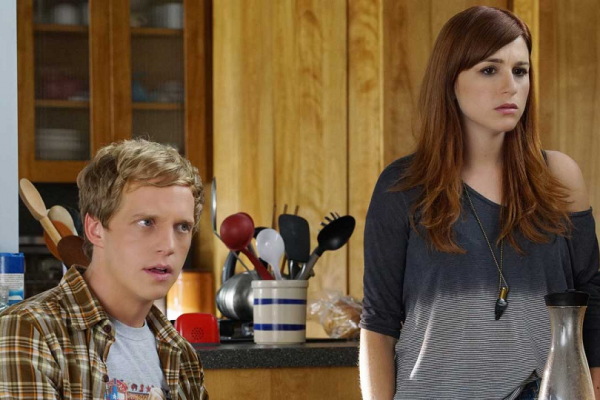 In 1983, almost half the entire population of the United States watched the finale of M*A*S*H, which was by then arguably a shadow of its former self. Last week, a little more than one in a thousand US citizens watched the third season premiere of You’re the Worst on FXX. Those numbers say a lot about changes in television over the last thirty-odd years. While some bemoan the loss of shared experience that has accompanied the collapse of the Big Three’s dominance in primetime, I prefer to celebrate the fact that this brilliant piece of keenly poignant lunacy has survived so long with an average viewership hovering around 300,000.

You’re the Worst is consistently creative, and persistently shocking. If you’re not watching it, you’re missing one of the cleverest and most affecting ensemble comedies of the 21st century.

If that sounds complicated, sorry, but it’s the simplest aspect of this deliriously over-the-top, bittersweet confection. Jimmy and Gretchen, despite their determined rejection of every parameter of the “likable” rom-com couple, and their raunchy and cynical commentary on everyone and everything, actually carry a fairly predictable rhythm that gives the show what passes for its anchor. They loudly proclaim their disinterest in love and commitment, they gradually get closer, then one or both of them screws it up more or less on purpose. Rinse, repeat. I’m not suggesting it’s a problem, in fact I think it’s a central accomplishment. I care about their relationship, even though they would almost certainly scorn my tame, domesticated lifestyle.

As unusual as the leading couple is for a TV sitcom, I think the true depth of the show is in the secondary players. Edgar the vet is clearly suffering deeply, and faces constant rejection and exploitation from his roommate and supposed friend Jimmy. He has some of the funniest, darkest lines, and also is the sweetest human available in this show’s world. I find myself rooting hard for him to heal and forge a healthy relationship.

Kether Donohue was nominated for a Critics’ Choice award for her role as the (deceptively) clueless and (definitely) self-destructive Lindsay, who only wanted to marry money and be taken care of, but ultimately can’t accept the cost of the bargain. She deserves all the statues there are.

The last scene of season 3, episode 1 features a sustained and devastating closeup of her face as she chops onions and her husband prattles on. She takes us on a heartbreaking journey through every facet of her cornered psyche, without a line of dialogue. I won’t reveal what she does next…let’s just say it’s not your typical closer for a sitcom.

You’re the Worst is not just darkly funny and haunting and full of compelling characters. It’s also tremendously creative in its exploration of the half hour form. A great example is the episode from season 2 featuring Justin Kirk (Weeds) as half of a couple with whom Gretchen becomes obsessed. For about the first third of the show, we don’t see any of the regular cast, we just follow this couple living their pretentious, smug existence (Kirk is hilarious posturing with his obligatory indie band in the garage)…and at the break, one shot of Gretchen in the bushes across the street, watching them. Her obsession plays out across the rest of the episode, ending in cruel disillusionment. There’s too much to say about just this one episode, but sufficient to note that it features a gutsy, radical approach to a well-worn format, a choice that is so outside the norm, and works so well, it persuades me that sitcoms are just getting started.

You’re the Worst, in my opinion, is the very best that situation comedy has to offer right now.